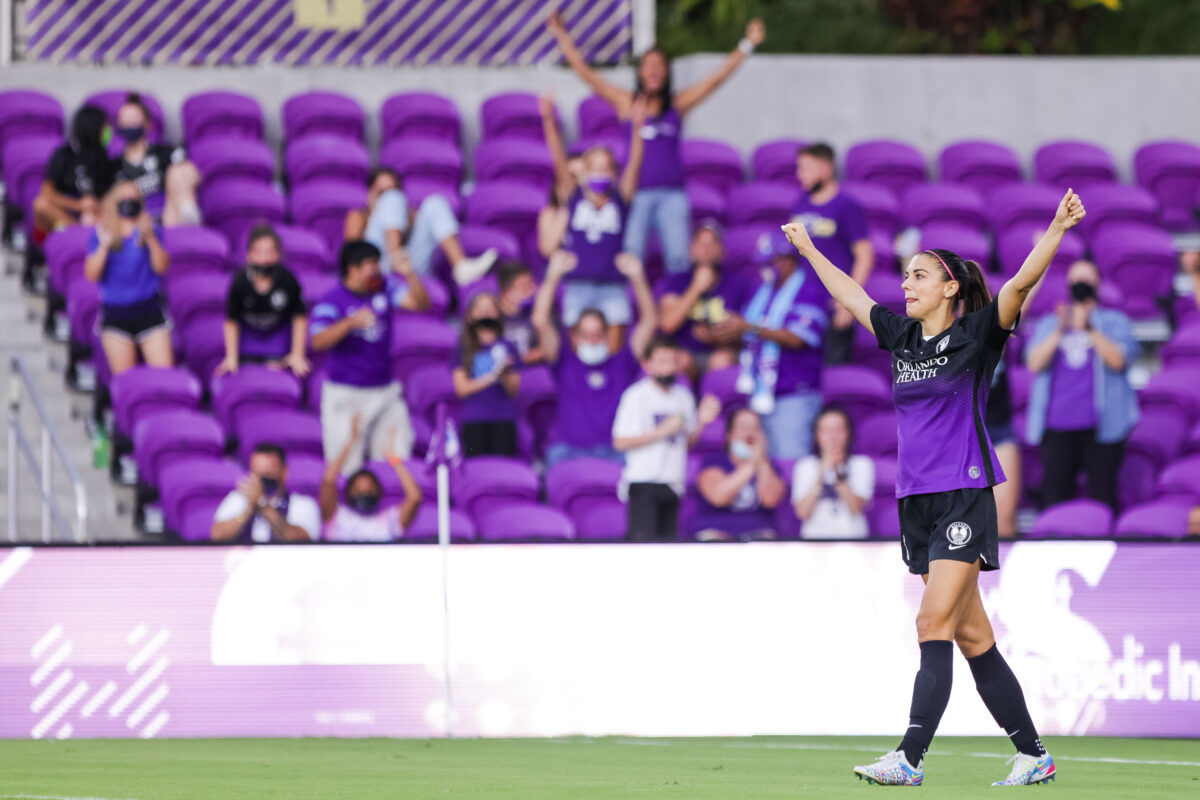 A busy Wednesday in the National Women’s Soccer League started off with an Orlando Pride win over the Portland Thorns. The Chicago Red Stars then earned their first win of the season over Kansas City, and the Washington Spirit defeated the Houston Dash despite playing the last 40 minutes down a player. Here’s what went down on the first midweek slate of the 2021 regular season.

The Skinny: Alex Morgan got on the scoresheet early in Orlando’s win, with a beautiful volley in the 22nd minute. Then, on the other end, Pride keeper Ashlyn Harris kept her team on top with a kick-save on a short range shot by Crystal Dunn. But the Pride couldn’t hold off the Thorns from equalizing just before half. Simone Charley managed to get up and over the Orlando defense in the 42nd minute, and her header into the ground bounced up and beat Harris. Immediately after the break, Sydney Leroux intercepted a bad back-pass by Kelli Hubly at the top of the Thorns box, and poked the ball past Thorns keeper Adrianna Franch for the winner. Dunn had a chance to equalize late, when she beat substitute Ally Haran on the end-line and cut into the box, but her shot sailed over the bar.

One Key Moment: Morgan’s goal deserves a second – and third and fourth – look. After a chance of her own went wide just minutes earlier, Taylor Kornieck delivered a beautiful chip pass over the Thorns back line to find Morgan. Off the bounce, and with Hubly bearing down, the Pride striker calmly slotted her left footed volley into the side netting to beat Franch. That’s three goals in three games for Morgan!

Inside the Game: Last week, after North Carolina’s loss to Orlando, Courage coach Paul Riley had some harsh words for the Pride: “They’ve changed their philosophy completely from two years ago when they were the artists and trying to play out the back all the time, but they’re certainly not that, they’re very direct. They don’t play any football whatsoever.” Well, whether they’re playing pretty or not, the Pride now have seven points from three matches. Tonight, they were able to take advantage of some lax defending – most notably the disastrous giveaway by Hubly on Leroux’s winner. And though Orlando were outshot 21 to 12 by Portland, they defended well as a team to limit the quality of the Thorns’ chances. Seven points puts Orlando at the top of the NWSL standings.

The Skinny: On the night Kansas City played their regular-season home opener while debuting their new jerseys, the visitors got the win. Chicago will be very excited that they finally scored their first goals of this regular season, in their third match. The Red Stars really struggled the first 30 minutes of the match, when Kansas City had three good chances on target, but Alyssa Naeher came up big to keep her team in it early. After that, Kansas City faded and Chicago started to control the match, creating plenty of decent chances.

Mallory Pugh put in a huge performance off the bench in front of United States coach Vlatko Andonovski, providing two assists in her first 9 minutes. For the first goal, Pugh used her speed to break away with Kealia Watt but then also continued her very long run to draw defenders, making space for Watt’s shot. She showed intelligence and signs of her returning to the form that made her the youngest U.S. debutant in a decade.

One Key Moment: This first goal of the 2021 regular season for Chicago will be a huge confidence boost for the side that lost 5-0 in their opener and didn’t score in their first two matches of the season. Scoring two goals in this game will hopefully help them moving forward. They know they can score goals now, they just have to do it consistently.

Pugh and Watt connect on the counterattack to score Chicago's first goal of the 2021 regular season! #KCvCHI pic.twitter.com/6Ei7nnLZ7E

Strong defense kept both teams in this match at times but the defending on set pieces specifically, throughout the match, was messy. Kansas City’s best chances came off corner kicks that were not properly cleared. At the same time, both teams committed well to getting all players back to defend and putting their bodies between the ball and the goal.

The Skinny: The Washington Spirit got their first victory of the 2021 regular season on Wednesday against the Houston Dash in an unexpected road game after Segra Field was deemed unsuitable to play due to construction delays, and an agreement between the Spirit and D.C. United, to play the game at Audi Field in Washington, D.C., could not be reached. That meant moving the game to Houston on short notice.

It didn’t seem to faze the Spirit, who scored two goals and won 2-1, even with only 10 players on the pitch for most of the second half. Andi Sullivan was shown a red card in the 50th minute after a foul against Gabby Seiler. Rachel Daly gave the Dash the early lead, but it was Ashley Hatch — who celebrated her 25th birthday on Tuesday– that had the last laugh, scoring the game-winning goal in the 70th minute off an assist from Natalie Jacobs. The first Spirit goal came from Ashley Sanchez, who struck a screamer past Dash goalkeeper Jane Campbell.

One Key Moment: It’s hard to say that the one key moment was the Sullivan red card, due to the Washington win. The key moment of this match, though, was a save from Aubrey Bledsoe. Of course, Sanchez’s screamer is high on the list, but in the 84th minute, Bledsoe made a spectacular save at the post on a Dash corner kick. That save helped Washington achieve their first victory of the 2021 regular season, instead of splitting the points with Houston. While Bledsoe got some help from a bounce on the ground, that doesn’t take away from the save.

Inside the Game: Sullivan will miss out of the next Spirit match due to the red card — Washington will take on OL Reign this Sunday — but it’s not the end of the world. Washington showed that players can step up without their leader. Sullivan has been a captain of the Spirit for a couple years now, and the players around her filled the hole when she exited the match. Washington had a couple close calls with the Houston attack of Daly, Nichelle Prince and then Veronica Latsko in the second half, but mustered enough clearances to earn the victory.