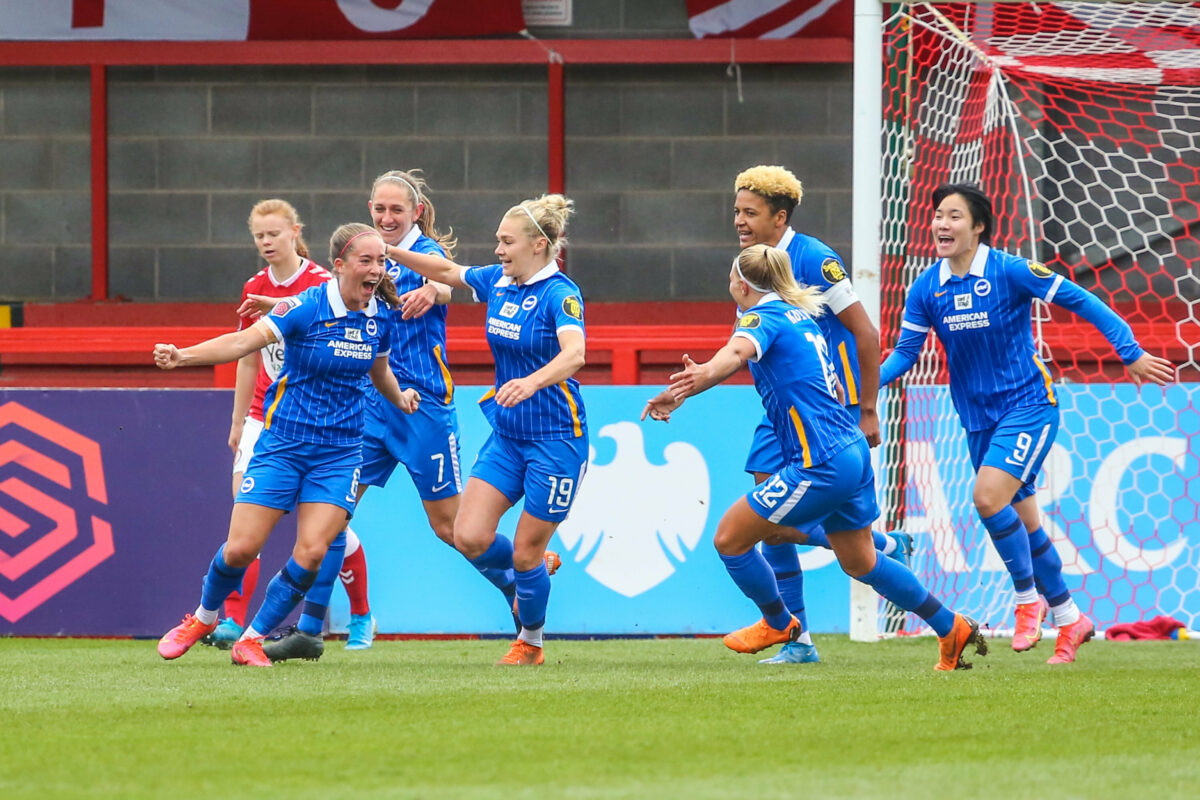 The FA Women’s Super League season is over and our individual awards have been handed out. Chelsea won the title; Bristol City were relegated. Emma Hayes was the choice for Manager of the Season, and Fran Kirby was the Player of the Season. Meanwhile, Manchester United’s Ella Toone won the Young Player of the Season award.

Now that the dust has settled, it’s time to grade each club’s performance in 2020-21. Who over-achieved? Who failed to live up to pre-season expectations? Here, we at The Equalizer reveal our FAWSL Report Cards, with all 12 teams graded from A to F.

Joe Montemurro’s last year in charge did not go according to plan. Facing consistent injury issues, Arsenal failed to launch this season. After a comfortable five-win start, it quickly became clear they couldn’t challenge their main rivals, ultimately earning just four points from a possible 18 in games against Chelsea, Manchester City and Manchester United. In the end, despite Vivianne Miedema’s continued scoring heroics, it required a big effort towards the end of the campaign just to seal another third-place finish and confirm qualification for next season’s UEFA Women’s Champions League.

Fresh off a promotion season in which they won 13 of 14 games, Aston Villa went big in the transfer window to build a team capable of competing in the FAWSL. World Cup-winning Japan forward Mana Iwabuchi was the star signing, though a lot was also expected of Lisa Weiss, Anita Asante, Chloe Arthur and Diana Silva, all of whom have been capped by their countries. But their short-passing style didn’t quite work and Gemma Davies was replaced as manager by Marcus Bignot, who brought in a more direct approach to seal survival. The basic objective was achieved, but only just.

Newman: My FAWSL team of the year and awards picks

When Carla Ward arrived as Birmingham manager last August, the club had just eight senior players. Chloe Arthur, Kerys Harrop and Lucy Staniforth had all left for Aston Villa, Tottenham and Manchester United respectively. However, despite a squad stretched to its limit, Birmingham began with three wins in their opening seven games. Ultimately, that fast start was enough to keep them in the league. Ward built an organized and resilient defensive unit on minimal resources, and got the best out of physical target striker Claudia Walker. She will try to perform similar miracles next season, only with another club – last week she was appointed manager of Aston Villa.

Brighton and Hove Albion: A

Brighton took a big step forward this season, as their points per game improved by 0.42 on the previous term. Finishing sixth, ahead of Reading, Tottenham and West Ham, they were without doubt the league’s biggest over-achievers. A stunning 2-1 victory over Chelsea in February kick-started their campaign, leading to six wins in their last nine games. Recruiting smartly through the additions of Inessa Kaagman and Emma Koivisto, who respectively brought creativity and bolstered the defense, Hope Powell also continued to develop young players like Maya Le Tissier. The reward was a first-ever FAWSL top-half finish in the club’s history.

Expectations were low for Bristol City at the start of the season, but after a difficult start, Matt Beard’s arrival as caretaker manager coincided with an upturn in form as they fought to stay in the top flight. Wins over Brighton and Reading offered hope as Ebony Salmon single-handedly led the counter-attack, and a run to the League Cup final was a welcome bonus. It’s hard to gloss over the painful end result: relegation from the FAWSL. However, Bristol City did not go down without a fight, sparing them from an ‘F’ grading.

Chelsea retained the FAWSL title they won in 2020. Considering the summer signings of Pernille Harder and Melanie Leupolz, this was par for the course. And yet, this was a special season. The title race felt a lot more competitive, with Manchester City signing several world class players in a bid to regain top spot. Consequently, and fairly, manager Emma Hayes described this title as her favorite. There was also a Community Shield win over City, another League Cup success, and a first-ever Champions League final appearance. Chelsea set their standards incredibly high, and somehow they almost eclipsed them.

Starting off behind the eight ball after Chloe Kelly’s departure to Manchester City, Everton were always going to struggle to make huge strides this season. A four-match winning start led to increased expectations, but they came back down to earth quickly. In truth, injuries didn’t help: Valerie Gauvin, brought in to add goal threat, could only start 10 of their 22 FAWSL games. Nonetheless, Willie Kirk continued to establish his team’s style of play and improved the team’s points per game and league position.

Gareth Taylor was appointed Manchester City manager after Nick Cushing’s departure last year, and he was backed heavily. In came World Cup-winning U.S. national team stars Sam Mewis, Rose Lavelle and Abby Dahlkemper. They were joined by England internationals Chloe Kelly and Alex Greenwood, as well as Lucy Bronze, widely regarded as the world’s finest fullback. Despite the investment, City started meekly, winning three of their first seven games. That cost them dearly in the title race, while they also lost out to Chelsea in the League Cup and Community Shield, and exited the Champions League at the quarter-final stage. Not a bad season, but not a particularly good one either.

Before her resignation, Casey Stoney described Manchester United’s inability to qualify for the Champions League as a “personal failure.” She was being hard on herself. This United team simply didn’t have the resources of Chelsea, Arsenal and Manchester City, but they hung with them for most of the season anyway. At the start of 2021, they were top of the table. A drop-off was inevitable: injuries left them short in attack, while Christen Press and Tobin Heath couldn’t shine simultaneously. Nonetheless, Stoney got the best out of her team. Yes, they finished just short of the top three, but their points per game shot up from 1.64 to 2.14 – the league’s biggest improvement.

Reading’s seventh-place finish meant they dropped out of the FAWSL top six for the first time since 2016. While manager Kelly Chambers has done an outstanding job setting that high a standard in the first place, it’s difficult to reflect positively on a season where just five wins were recorded. This is especially true considering the quality of the club’s recruitment last summer: Jess Fishlock, Danielle Carter, Emma Mitchell and Deanne Cooper were all excellent signings, but their arrivals weren’t enough to prevent a slide down the table. Far too often Reading dominated only to snatch a draw from the jaws of victory. In a word? Underwhelming.

After a seven-game winless start, Tottenham parted ways with long-serving head coaching duet Karen Hills and Juan Amoros. Rehanne Skinner, formerly an assistant and youth coach with England, was appointed their successor. Skinner’s reign began promisingly before a run of 10 games without victory almost led Spurs into a relegation battle they had no right being in. Despite a good mix of experienced internationals (Alanna Kennedy, Shelina Zadorsky, Ria Percival), exciting young players (Angela Addison, Kit Graham, Jessica Naz) and the short-term presence of Alex Morgan, Tottenham got worse this term.

Why Tottenham’s Angela Addison is full of potential

West Ham had to scrap just to stay in the FAWSL this season, only securing survival in the final weeks. Theirs was the biggest slump in points per game, going from 1.14 the previous year to 0.68 this term. The decline came in spite of Rachel Daly: her three goals left her one away from joint-top scorer status, despite the fact she played just nine games on loan from the Houston Dash. Other signings, like Emily van Egmond, impressed in spells, but it wasn’t enough to inspire a change in fortunes. Even a mid-season change of manager, from Matt Beard to Olli Harder, had little impact on results. West Ham can do much, much better in 2021-22.