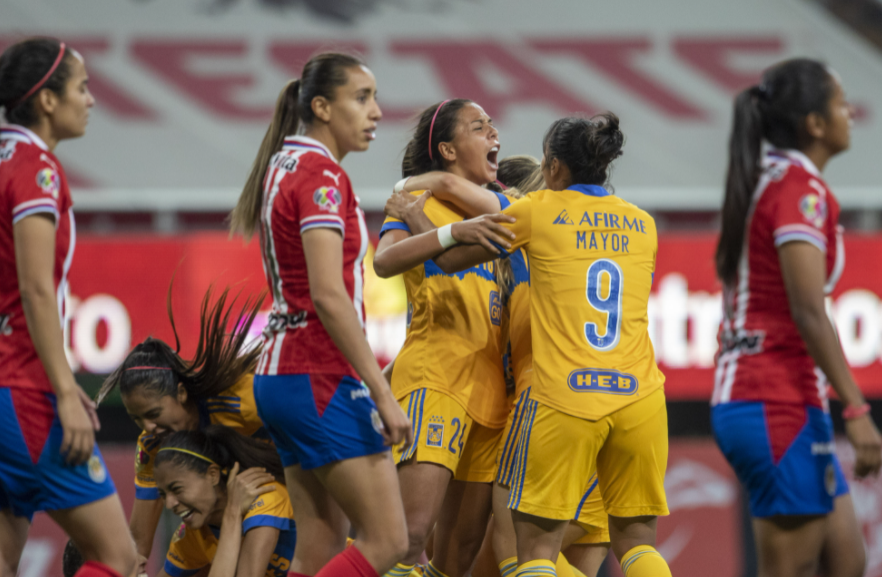 The first leg of the Liga MX Femenil final between Tigres and Chivas de Guadalajara kicked off Monday night at the Estadio Omnilife, with Tigres defeating hosts Chivas 2-1 in the first leg of a series which will crown the Clausura champion. Tigres is currently the defending Apertura champion, winning the title in the fall.

There are two legs to decide the champion of Mexico. The second leg will take place at the Estadio Universitario on May 31

Tigres took the early lead in the 13th minute, courtesy of captain Stephany Mayor. Mayor ran on to a ball headed into her path and dribbled up the left side and toward goal before going 1-v-1 with Chivas defender Michelle Gonzalez. Mayor won the battle and struck the ball toward the far post for the early goal.

Chivas equalized five minutes after halftime. Anette Vazquez gave the home fans something to cheer about after sneaking between two defenders and sending her shot past Tigres goalkeeper Ofelia Solis. Blanca Felix, the Chivas goalkeeper, assisted the goal.

However, both sides saved the drama for the end. Chivas was given a chance to take the lead with a penalty in the 91st minute, but Christian Jaramillo hit the crossbar in an attempt to chip Solis.

Tigres was more clinical in stoppage time. Greta Espinoza scored the game-winning goal in the fourth minute of stoppage time, on a corner kick which produced chaos inside the box. Eventually, after the ball was touched by at least four Tigres players, Espinoza headed the ball past Felix.

Tigres takes a 2-1 lead heading into the second leg — at their home field.

Tigres gets the final say! Greta Espinoza with the final strike of the night!

With that, Chivas drops the first leg at home, 1-2, against Tigres. The second leg will be next Monday, May 31!#GUAvTIG | 1-2 | #LigaMXFemenil pic.twitter.com/bIQ9SDENW2

Previewing Leg 2 of the Clausura Final

The final leg will take place on Monday, May 31, at 8 p.m. EST, on TUDN. Tigres does not have a large lead, contrasting to the team’s other playoff matches. The team will rely heavily on Mayor to do what she did in this match — get on the board early.

However, Chivas does have a problem on their hands. In the second half, Alicia Cervantes, the team’s leading goal-scorer, was carted off the pitch with an injury in the 77th minute. Isabella Gutierrez came on to replace the veteran. Due to the second goal for Tigres, Chivas will certainly be working on defending set pieces.

There will be plenty of focus on Vazquez and Joseline Montoya to get it going in the attack, especially if Cervantes is not able to suit up.

According to TUDN Digital reporter Adriana Terrazas, some changes are coming to Liga MX Femenil. Translating from Terrazas, Liga MX is confirmed to implement the following changes: 2 foreign players per team, the creation of the Women’s U-17 tournament and replacement or maternity player registration throughout the season.

In addition to those changes, Terrazas also reported these changes: the league wants 100% match streaming, a potential alliance with the National Women’s Soccer League and Barclays FA Women’s Super League and a Champions Cup in December 2021.

The biggest item is the two foreigners per team. According to league policy, Liga MX Femenil is strictly open to Mexican international players. Allowing two international players into the league will not only help its exposure, but has the possibility to bring in some great talent.

Details of these plans are still forthcoming from the league.