Kassouf: When the NWSL stops being polite, and starts getting real 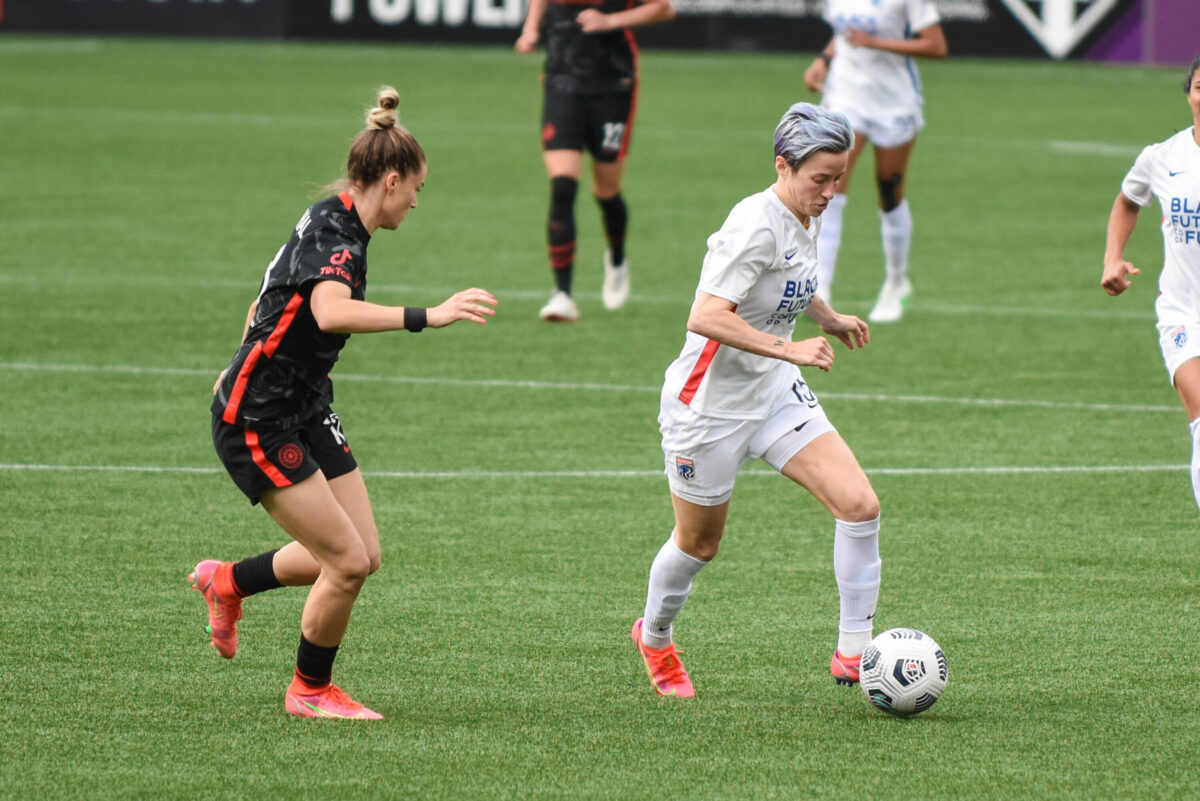 Week 2 of the National Women’s Soccer League’s regular season began with the kind of wholesome, storybook plot which might pique the interest of a budding Netflix director (or should that be Paramount+?). Within 48 hours, narratives shifted to the more begrudging and trolling types which breed a deeper fandom. The NWSL can be accused of a lot of things, but boring is not one of them.

Emina Ekic lifted expansion side Racing Louisville FC to the top of the table on Friday night with a stunning goal made better by the backstory which assisted it. Ekic grew up in Louisville, went to college at the University of Louisville, then scored the first regular-season goal for Louisville’s only top-flight pro team. For 24 hours, the humble hometown kid was the story of the league.

Then the Orlando Pride beat the North Carolina Courage for the first time in almost four years, prompting Courage head coach Paul Riley to lament the loss to such direct play and note that the Pride “don’t play any football whatsoever,” a day after he had voluntarily ripped England’s top flight for being slow.

After his team failed to score once again on Saturday, Chicago Red Stars coach Rory Dames quipped that it would fuel the doubters who have piled on to his team early in 2021.

All of that, however, was the exposition to Sunday’s crescendo in Portland, where the heavily favored Thorns fell to OL Reign, 2-1 in an entertaining match which re-ignited a rivalry that had gone slightly stale. Megan Rapinoe poked at the home crowd after scoring a thrilling equalizer and proceeded to stoke the fire postgame, calling the Thorns “assholes” that “everyone loves to hate” — and doing so, somehow, in the most surreally respectful way possible. Her words were not venomous so much as they were intentional. Rapinoe twice ended her self-proclaimed shit-talking by noting, “that’s the kind of rivalry we want,” and that is “what keeps all the fans entertained… as this league continues to grow.”

Rapinoe gets it. She is polarizing, whether in the relatively more innocent battle between Portland and Tacoma (sorry, Seattle) or the more prominent opposition to Donald Trump during the 2019 World Cup. She knows that people are listening and that they will have an opinion one way or another — and that the stage of a rivalry game on national TV needs to be embraced, so that we wake up on Monday morning still talking about the game and all the related shenanigans, as we are here.

Rapinoe is not the only one who gets it, but she remains one of not nearly enough in the space. The relatively infancy of women’s professional soccer is a disadvantage in many ways, including the unfair way that a 9-year-old league is compared to men’s sports properties which are exponentially older and have historically been granted more leniency by embedded, systemic sexism across patriarchies.

Where that nascent stage is an advantage is that the women’s game can learn from the ugly side of the men’s game —the greed, which has driven owners ranging from the oldest clubs in Europe to the relatively young clubs of MLS to make recent decisions so intentionally against the wishes of the very fans who support them, serving as just one example. Leaders of women’s sports properties must plan diligently to future-proof from such scenarios. They must also embrace the rivalries, the smack-talking, and the players’ personalities. The NWSL (and the U.S. national team) benefits from devout player-driven fandom even more so than team-specific support, an avenue which has brought great success to the NBA. To embrace that means to get a little uncomfortable — to get real. Too often, the NWSL takes the safe path, hiding from the water-cooler talk (or maybe Slack chats, in today’s world) which is the very foundation of daily fandom in any big league. There is no shortage of stories in the league or the sport; we are still lacking far too much storytelling. We should not need Megan Rapinoe to keep reminding us that the stories are right there, waiting to be told.

More thoughts from across the NWSL for subscribers of The Equalizer Extra:

Access the best women’s soccer coverage all year long
Start your FREE, 7-day trial of The Equalizer Extra for industry-leading reporting and insight on the USWNT, NWSL and beyond.
Subscribe
Existing Users Sign In Here
Related TopicsExtraFeaturedMegan RapinoePaul RileyRory Dames

NWSL Results: Reign earn huge win over Portland to re-ignite Cascadia rivalry
The Equalizer Podcast: The magic is back