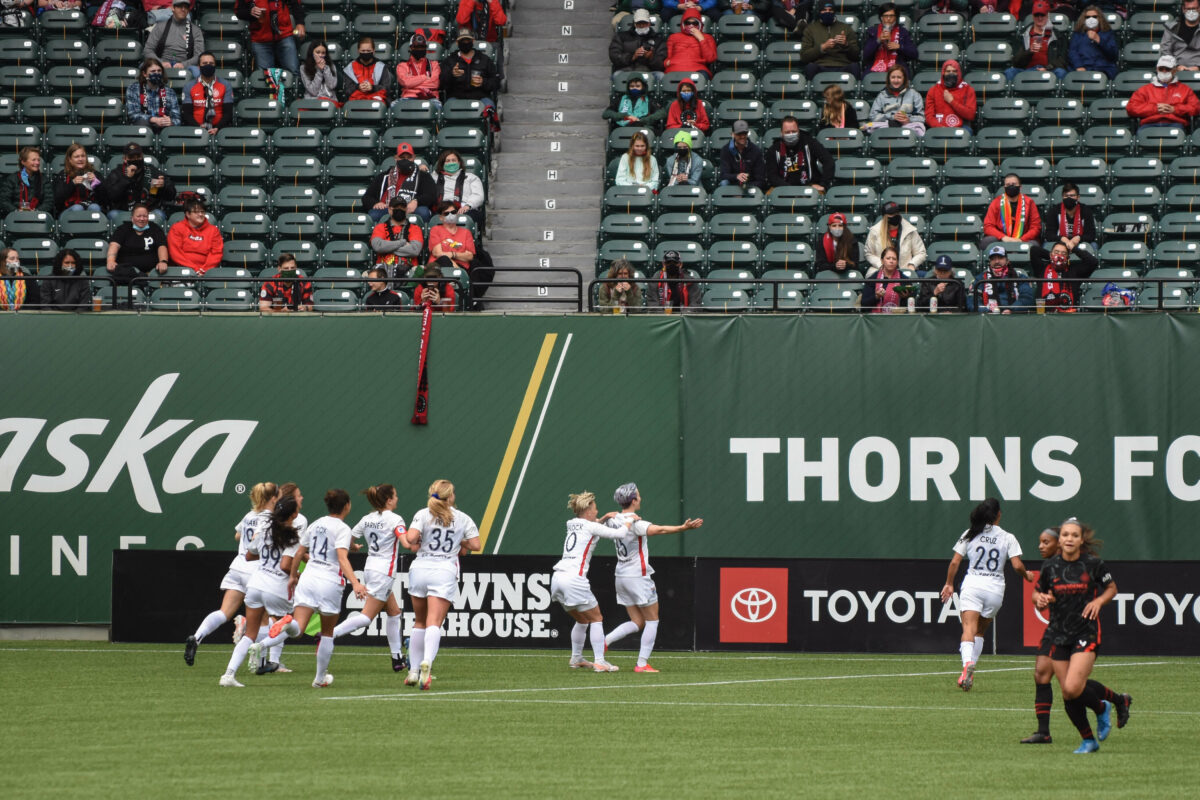 The Skinny: The first Cascadia rivalry match of the 2021 regular season did not disappoint. The match was physical and hard fought by both sides, but in the end the visitors took home all 3 points. All three goals were scored in the first 15 minutes, with Portland striking first through Christine Sinclair in the 4th minute on a wonderful volley lobbed over Karen Bardsley. The Reign would equalize just five minutes later off a free kick beautifully curled in by Megan Rapinoe, who promptly taunted the Rose City Riveters with her celebration. The Reign took the lead only another five minutes later when Dani Weatherholt worked hard to send the ball back into the dangerous area and found Shirley Cruz, who finished on the volley. Cruz’s strike took a deflection and caught Adrianna Franch wrong-footed.

Portland had 60% of the possession and created nine shots on goal, looking throughout the match like they could find the equalizer. The Thorns thought they had equalized in the 77th minute, as Lindsey Horan’s diving header found the back of the net, but it was called offside. Portland’s players may feel they were unlucky in some calls, several times shouting for a penalty or hand ball, but in the end the Reign defense held strong.

One Key Moment: We’ve seen Rapinoe score plenty off free kicks for the United States, but she hadn’t scored for her club since 2018. While she will likely miss time for the Olympics, these early away points in the rivalry have proven important in past years. The timing of her goal was crucial, too, shifting momentum back toward the Reign after an early mishap.

Fishlock draws the foul and Rapinoe equalizes with her free kick!!! #PORvRGN pic.twitter.com/R0Wbz2bO2v

Inside the Game: It is difficult to overstate the importance of Jess Fishlock to OL Reign. Possession and shots both favored Portland, but Fishlock’s incredibly vocal leadership and constant engine to cover so much ground helped make the victory possible for the Reign. Dunn has been pulling strings in midfield for the Thorns while also winning tons of balls, but Fishlock did a lot to heavily limit her influence on the game. The Welsh Dragon was constantly on her, physically challenging for every ball. Crystal Dunn, while not finding the scoresheet last week, was crucial in that game; limiting her prevented the Thorns from playing through the midfield.

With all the players still coming for the Reign, this win shows that they could be the championship team they have been pushing to be. They seem to have played through some issues in the Challenge Cup and now look like a team other’s won’t want to compete against.

The Skinny: There was history in Houston, and also some split points. Don’t forget the chaos, too! Rachel Daly became the all-time leading goal-scorer for the Houston Dash with her strike in the 60th minute. In the second half, Elizabeth Ball picked up a second yellow card, forcing Kansas City to continue with just 10 players. However, it was Taylor Leach that was the hero for Kansas City, scoring the game-tying goal to get a point on the road. Notably, also, for Kansas City was the early insertion of Katie Bowen for an injured Kristen Edmonds.

One Key Moment: Kansas City wants to build momentum, and getting a point on the road will help with that task. While the goal that was given up to Shea Groom was lackluster defensively from Kansas City, the team made up for it with the stoppage-time equalizer. Leach leapt up and took on her defender to get the ball past Jane Campbell.

Inside the Game: Kansas City had to deal with a lot of rotation. The early substitution certainly messed with any subs that head coach Huw Williams might have planned for at BBVA Stadium. However, the red card to Ball shook things up entirely. Ball clipped Nichelle Prince, giving her the second yellow from referee Karen Abt. Give credit to Kansas City for not hunkering down and letting Daly, Kristie Mewis and Veronica Latsko drive right by. Kansas City continued to attack and finished the match with 13 shots, with six on frame against Campbell.

Red Stars rebound from Week 1 debacle after players-only meeting
Kassouf: When the NWSL stops being polite, and starts getting real