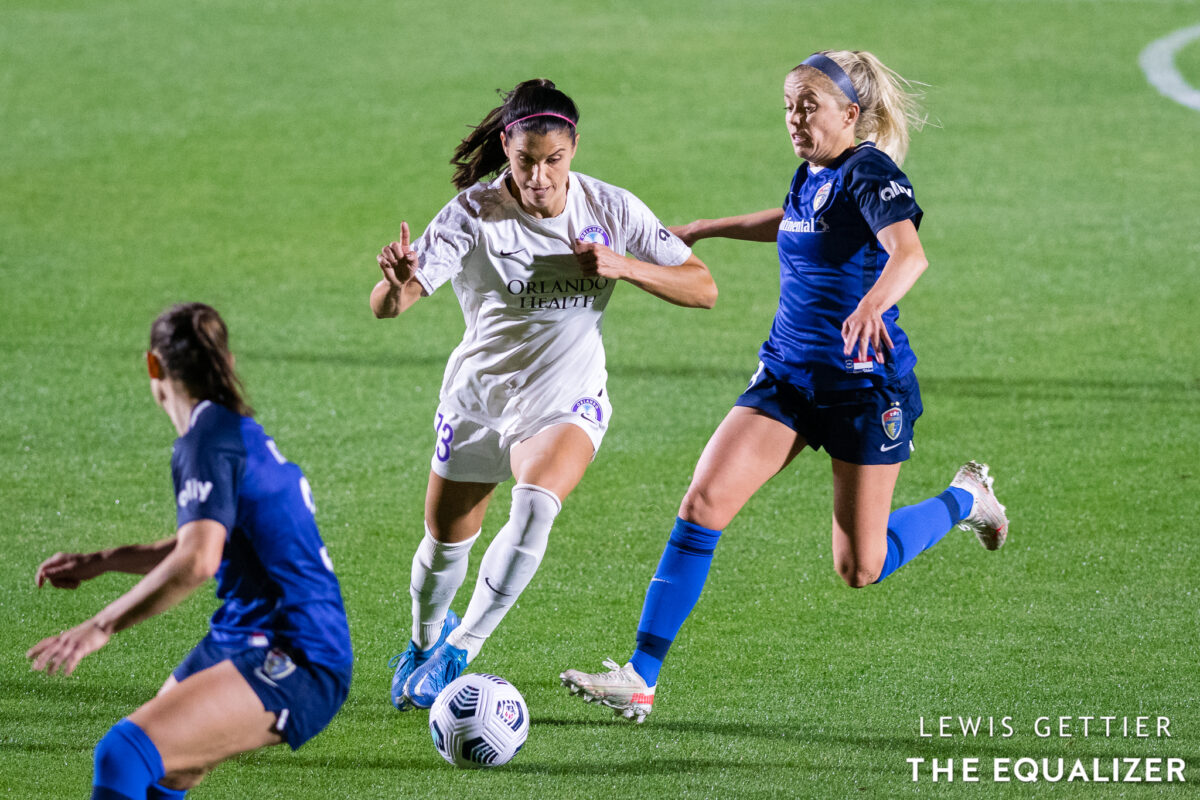 The Skinny: The Orlando Pride beat the North Carolina Courage for the first time since Sept. 30, 2017, a sign of the times with Orlando’s rebuild and the Courage’s recent struggles. Early on, neither side could really find their footing as the game was back and forth with no clear chances on goal until 30 minutes in, when Debinha sent a sitter over the bar. The Courage would be punished for their inability to take chances as Orlando took the lead 36the minute thanks to Sydney Leroux’s goal. It was poor passing along the back line that led to Leroux picking off the ball and then finishing near post.

The Courage continued to struggle offensively, where we are so used to them being dominant. Credit to the Orlando defense that held strong and played very well the majority of the match, as well as the solid goalkeeping performance from Erin McLeod in her first regular-season appearance for Orlando. They came up huge in the 65th minute to keep their one-goal lead after the keeper misplayed it but managed to get a strong hand on the ball to swat it away from McDonald. Fifteen minutes later, Alex Morgan crucially doubled the lead for Orlando. But the Courage were not about to go three games without scoring a goal, and McDonald pulled one back just before stoppage time, doing well to get the shot off in the six-yard box while surrounded by defenders.

One Key Moment: Alex Morgan, in her first meaningful minutes for Orlando since early 2019, has two goals in two games to start the 2021 regular season. Her goal late in the game ended up being the game-winner as she got in behind the defense, bodying off Abby Erceg and finishing far post from a very tight angle. This is the form NWSL fans have been looking for from the United States star and it is a good sign for Orlando that both she and Leroux are scoring and creating chances. Morgan made the same run several times in the game, and had similar chances, but unlike North Carolina, Orlando took their chances, scoring two of their three shots on goal with only 40% possession throughout the match.

Morgan makes it TWO for Orlando! The flick on from Kornieck, the tight angle finish from Morgan 🔥🔥#NCvORL pic.twitter.com/PKWva4tlVh

Inside the Game: This match was a clear example of North Carolina’s recent struggles. Despite having nearly 60% possession and sending in 37 crosses — to Orlando’s 10 — they only found the back of the net once. Sam Mewis is set to return to the Courage on Monday, and Paul Riley has also teased more signings. Mewis could be the answer in midfield, but the Courage still feel very different from the unbeatable force they were in 2018 and 2019. Orlando’s struggles with giving up late goals continued, but overall it was a very strong defensive performance from the back line, which is what they have been desperately missing in past years.

The Skinny: The Chicago Red Stars bounced back from a massive loss to the Portland Thorns last week for a scoreless draw with Gotham FC, who faced off with the Thorns in the Challenge Cup final this year. Chicago’s front six — especially Kealia Watt, Mallory Pugh and Vanessa DiBernardo — put heat on the Gotham defense and goalkeeper Kailen Sheridan. Chicago took 13 shots and registered five of them on goal, with two on goal from Watt. But the Red Stars’ offense couldn’t finish, leaving the forwards scratching their heads. As for Gotham, Midge Purce put in work on offense and defense, but the team did not threaten Alyssa Naeher with a shot on goal. Instead, the crossbar got in the way a few times (we’ll get to that in a moment). In an all-around positive, however, more than 3,000 fans joined in some fun at SeatGeek Stadium, making their voices loud and clear. Sarah Gorden spoke to the emotions of that postgame; Red Stars supporters held up a “We Believe Sarah Gorden” sign in response to an alleged incident in Houston last month.

One Key Moment: Oh, the crossbar — the current enemy of Carli Lloyd and Evelyne Viens. Both Gotham players hit the crossbar in the first half against Chicago, which were the best opportunities of the night for the visiting team. Gotham was pretty much held in check by Chicago, but these shots from Lloyd and Viens were too good to be denied by the bar.

Are the Red Stars beating Gotham or is the crossbar!?! 🤯#CHIvNJNY | 0-0 pic.twitter.com/OXE3Y6Lj9Q

Inside the Game: The key talking point from this match will be the lack of finishing from both sides. Having shots hit off the crossbar isn’t enough on offense for Gotham. Kealia Watt is, slowly, still figuring out her partnerships up front with Pugh and Rachel Hill. Red Stars head coach Rory Dames told the media this week not to fret, and that it’s too early in the season to reach near any panic buttons. However, the lack of finishing is certainly a concern. Defense, though, for both sides on Saturday was exceptional, with big shout-outs to Caprice Dydasco and Estelle Johnson from Gotham and Kayla Sharples and Sarah Gorden from Chicago.