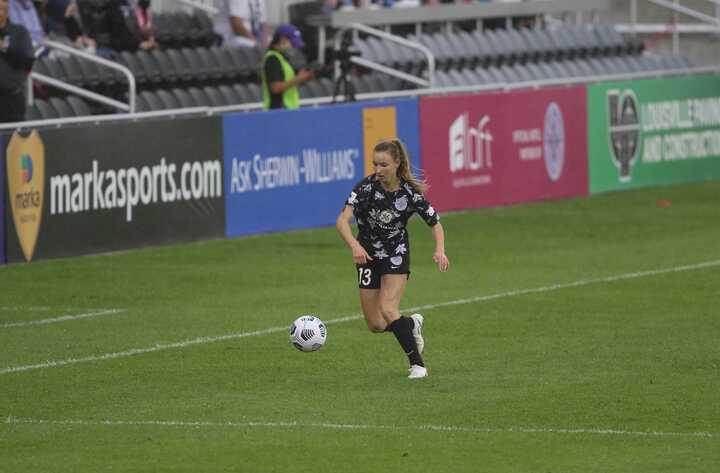 A busy second weekend in the National Women’s Soccer League kicked off on Friday night, with Racing Louisville finding the net twice to defeat the visiting Washington Spirit.

The Skinny: After an early opening chance – early, as in the first minute of the match – from Spirit forward Trinity Rodman forced a diving save from Louisville keeper Michelle Betos, the first half was mostly a controlled affair, with both sides managing just one dangerous chance each. The Spirit did find the back of the net in the second half, when Kumi Yokoyama beat Betos with a shot, but she was called offside. After withstanding some sustained pressure around the hour mark, Louisville came alive and scored two goals in five minutes – including a golazo from substitute Emina Ekic – to earn their first win in franchise history. The Spirit had 29 shots to Louisville’s eight.

In addition to the loss, the Spirit will depart Kentucky with some possible injury concerns. After less than 10 minutes on the pitch, Dorian Bailey left the match with a shoulder injury. Then in stoppage time, Rodman was down on the field for an extended period of time, and departed before the final whistle. Postgame, Spirit coach Richie Burke said Bailey dislocated her shoulder, while Rodman appeared to get an elbow to the ribs, but is expected to be okay.

One Key Moment: Ekic, who replaced Katie McClure in the 61st minute, had an immediate impact on the game. For Racing’s first goal, Ekic blocked an attempted clearance, then cut past a Spirit defender and unleashed a beautiful, curling shot that Aubrey Bledsoe had no chance of getting a hand on. Ekic – who is from Louisville and went to school at the University of Louisville – went on to assist Cece Kizer for Louisville’s second goal just minutes later.

Inside the Game: This one was tale of momentum shifts. After the Spirit’s early chance, Louisville had the momentum for much of the first half, largely snuffing out the Spirit attack. Then the Spirit came out of the halftime break the more dangerous side, and had three chances in quick succession around the hour mark. Andi Sullivan took the ball herself to the edge of the 18, but her shot was wide. Shortly after, an Ashley Hatch header forced a diving save from Betos. Surviving this difficult stretch – which also included the offside call on Yokoyama’s goal – served as another turning point of the match for Louisville, who went on to score two in quick succession later in the half, with the help of the substitute Ekic.