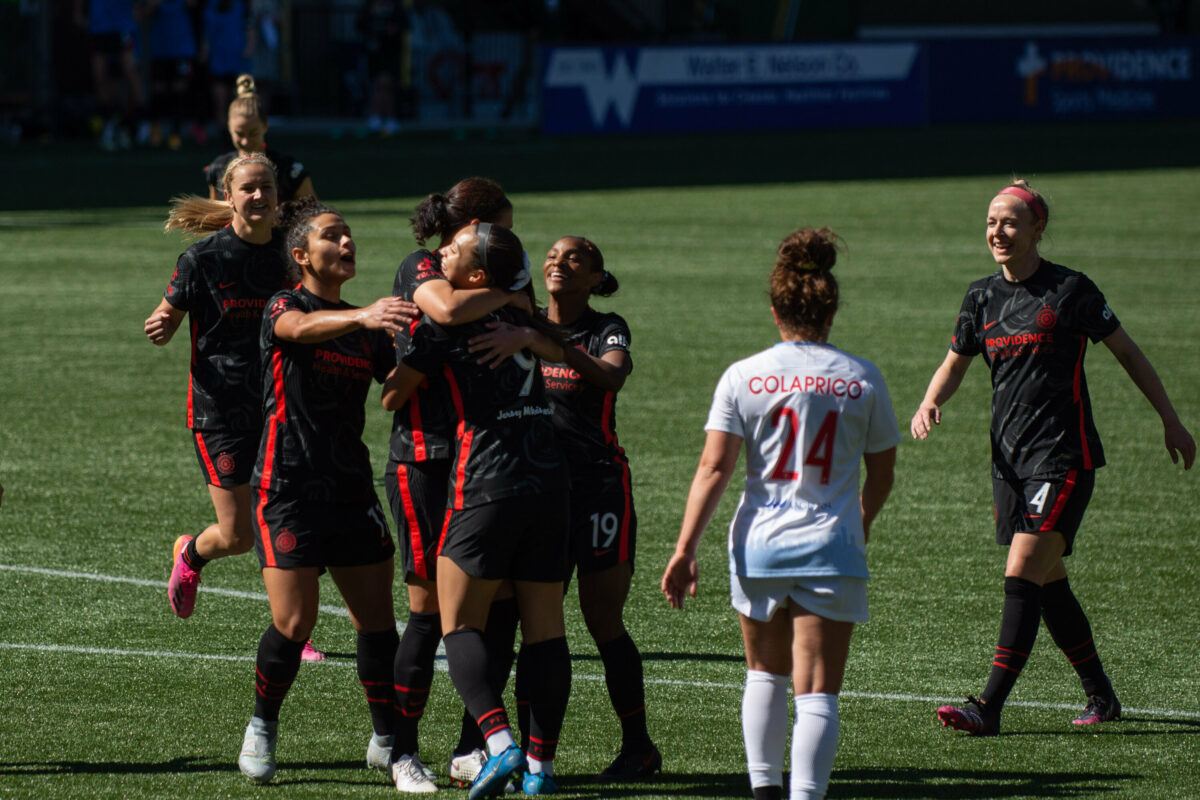 Throughout the regular season, The Equalizer will continue to bring you in-depth, industry-leading insight and analysis to subscribers (click here to subscribe and get premium content year-round). Our plan for game recaps is the following: one link for each day of game action, with context of what happened. The NWSL league site will give you box scores and stats; we don’t need to regurgitate that. Instead, we’ll look to catch you up on the key moments and tactical shifts.

The goal of this format is to catch you up on what happened in a given match quickly but thoroughly enough to get you the need-to-know. We will still produce longer analysis in addition to these recaps. As always, let us know your thoughts, and we’ll adjust if needed based on feedback. Here, you’ll find recaps of Saturday’s action (opening day).

The Skinny: Sophia Smith scored twice and the Thorns did a Barcelona (too soon?), going up 4-0 at halftime. (They actually got to four more quickly than Barca did vs. Chelsea, dropping that many on Chicago by the 30th minute). Chicago unraveled early and it was made worse by a scary injury to captain Julie Ertz, who was subbed out in the 29th minute after a collision in midfield. Ertz could barely put weight on her right leg as she was helped off the field. Head coach Rory Dames said postgame that Ertz will have an MRI on her right knee on Monday, and that he was not going to speculate until he saw those results. He did say the team would do everything they can to have Ertz ready for the Olympics.

One Key Moment: The Thorns seem to have a knack for scoring early at home and putting teams on the back foot, and that happened again on Sunday. Portland got on the board in just the 4th minute when Smith’s shot/cross deflected off Tierna Davidson and into the net. That goal set the tone early, and the Red Stars never responded, instead looking like a team that never really showed up. Dames expressed a frustration with the lack of execution from his team, and conceded that the Red Stars have had trouble in Portland. He corrected himself at one point that they didn’t need a “better” performance so much as they needed a “different” one, conceding that Portland could have scored more.

Inside the Game: A short summary of how easily Portland picked apart Chicago is that Adrianna Franch had not one but two quasi-assists on Smith’s goals — one from a punt which founder Morgan Weaver before Smith, and another which came off a goal kick. Franch, as a reminder, is a goalkeeper. The Thorns ran right up the spine of the Red Stars (which, at least in midfield, is where their strength has been, traditionally) and they did so quickly and efficiently. Smith will grab some of the headlines, and take nothing away from the Thorns — who are very clearly the standard-bearers in the NWSL right now — but this was as flat of a performance as possible from Chicago everywhere on the pitch.

The Skinny:  Alex Morgan’s 81st-minute equalizer cancelled out Ashley Hatch’s 76th-minute opener as the Pride and Spirit split the points Sunday at Exploria Stadium. Following a first half in which neither team found their best attacking boots, both sides picked up the pace in the second. Both goals were the product of the goal-scoring team’s preferred attacking method. Hatch beat Ali Krieger on a header at the end of a Tori Huster cross that was set up by Ashley Sanchez winning a ball in midfield and dribbling through space to create the chance. The Pride equalized when Morgan ran onto a Route 1 ball out of the back by Phoebe McLernon.

One Key Moment:  Trinity Rodman was not on the scoresheet for the Spirit and was mostly quiet in her final soccer game before turning 19. Her sophistication, though, was on full display including during the goal-scoring sequence. With Sanchez running through space, Rodman drifted to the right, where Huster was overlapping from her right back position. Rodman ran interference on Pride left back Courtney Petersen, even giving her a light shove at one point. Then, upon realizing the ball was going to Huster, cut back toward the center of the box in an effort to either receive Huster’s cross or open up more space in the box.

Inside the Game: Morgan’s goal was hardly the only attempt the Pride made at scoring by playing balls long. In the opening minutes of the second half, Marta played one over the top that landed in a similar spot to Morgan’s goal. That one was for Sydney Leroux. Pride keeper Aubrey Bledsoe was a split second late coming out for it, but she did arrive in time to bother Leroux’s shot that wandered just wide as the two collided. Both Morgan and McLernon said postgame that the Pride trained to take advantage of the Spirit’s high back line. If the Pride continue using that tactic to good effect, it could be an issue for opposing defenses who won’t see it consistently from too many other clubs around the league.