Newman: My FAWSL team of the year and awards picks 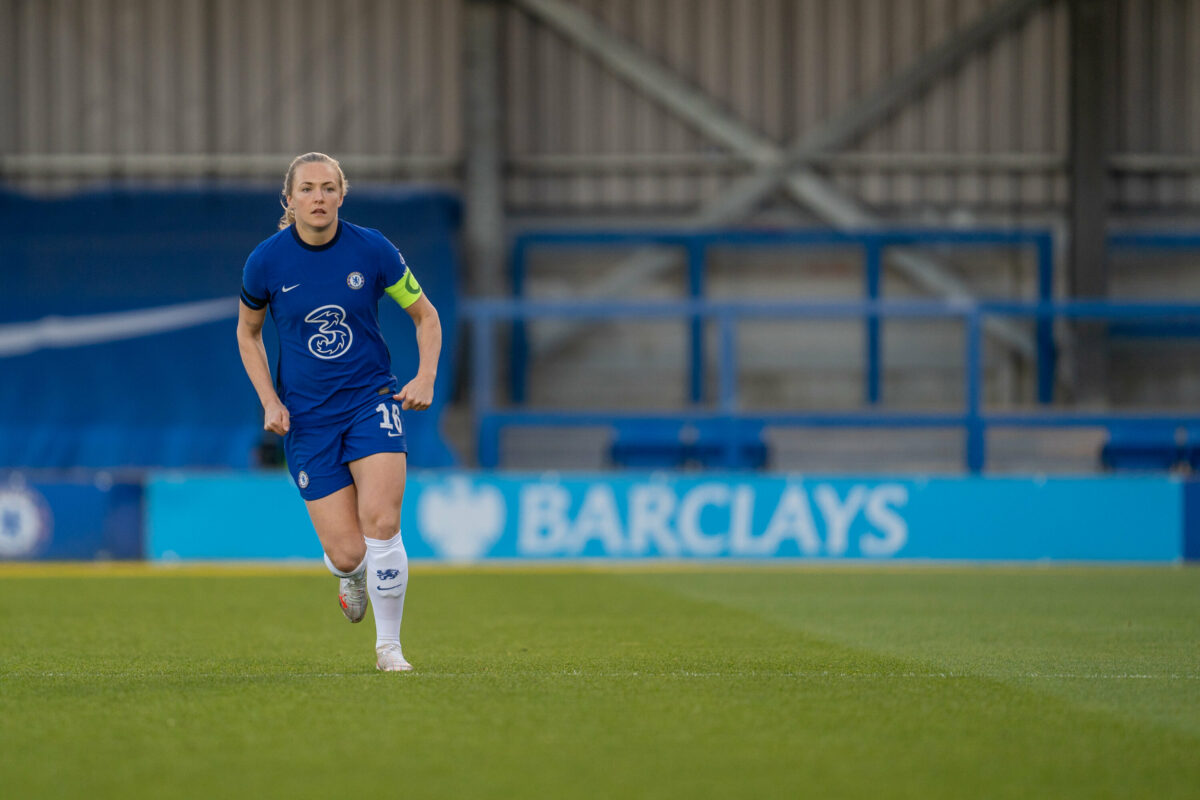 The 2020/21 FA Women’s Super League season is over, and it didn’t disappoint. At the top end of the table, the title race went right down to the wire, with Chelsea sealing a second straight championship on the final day of the campaign, pipping Manchester City by a mere two points. The other end of the table offered similar drama, as Bristol City’s relegation wasn’t confirmed until the last game. West Ham United, Aston Villa and Birmingham City live to fight for another year in the top flight.

Now, with the league positions confirmed, it’s the time to hand out some awards. Here, we at The Equalizer will name our FAWSL team of the season, with further awards for best player, best young player, and best manager.

This article is free and open for all to read. We’ve covered the FAWSL extensively and in-depth this season for subscribers to The Equalizer Extra. Subscribe today for year-round, industry-leading coverage of the FAWSL, NWSL, U.S. women’s national team and more.

TEAM OF THE SEASON

Berger was colossal for Chelsea this season, coming up big at crucial moments. Her gasp-inducing reaction save in the 2-2 draw away to Manchester City acted as the difference-maker in the title race. If it wasn’t for that stop, Chelsea may well have been watching City pick up the winners’ medals. The German international’s superb reflexes led her to a save percentage of 79.3, the best in the FAWSL. Chelsea manager Emma Hayes was right to put Berger in the same sentence as Christiane Endler when discussing the best goalkeepers in the world.

Le Tissier was one of just three players to start every single game for Brighton, a stat made all the more impressive considering she is still only 19 years old. The youngster took on real responsibility for this term’s FAWSL surprise package, and rarely put a foot wrong. She also showed versatility, adapting easily to a new position after being moved to right back. This year’s Olympics are too soon to realistically join Team GB, but with good strength, athleticism and an accurate final ball, an England call-up must surely be on the horizon.

Sevecke enjoyed a solid debut season in the FAWSL, performing consistently for an Everton side that briefly threatened the status quo. The 24-year-old Danish international joined from Fleury in France last summer, and took no time at all adjusting to a new league. Whether at the heart of a back three or four, she looked assured on the ball and did the defensive fundamentals well. Sevecke helped Everton to six clean sheets in her 19 starts, and her aerial duel success percentage of 71.7 was among the best in England’s top flight.

Chelsea missed their captain whenever she was out through injury. Eriksson’s composure, leadership and astute positioning marries perfectly with Millie Bright’s front-foot defensive approach, so it was no great shock that Bright looked shaky in the absence of her central defensive partner in the 2-2 draw with Manchester City. There are more physical defenders in the FAWSL, but few who read the game as well as Eriksson does, and fewer still who can bring the ball out of defense as capably as the 27-year-old, error-averse Swedish centerback.

McCabe was one of the most obvious selections for this team, having enjoyed her finest season yet in an Arsenal shirt. Now fully adjusted to the left-back position, the 25-year-old brought marauding runs down the flank and dangerous crosses to Arsenal’s attacking weaponry this season. Nobody set up more goals than McCabe’s 11; only Fran Kirby and Chloe Kelly tied that tally, and both are forwards playing for the two best teams in the league. Is McCabe the best left back in the world right now? If not, she can’t be far off.

In the 2019-20 season, Toone was a promising midfielder struggling to get regular minutes. Now, she’s arguably the first name on Manchester United’s team sheet. This season, the 21-year-old nailed down a starting role behind the forwards and developed into a vital player in every phase. Defensively, she led the pressing with intensity. Offensively, she demonstrated exceptional movement to find pockets and make things happen, scoring nine goals and setting up a further five. Toone’s form was rewarded at international level when she made her England debut in the friendly with Northern Ireland in February.

Chelsea gained headlines with their recruitment in 2020, firstly through the signing of Sam Kerr, then with the summer addition of Pernille Harder. Sandwiched in-between those two moves was the signing of Leupolz. While the German’s arrival wasn’t quite so exciting for the neutral, it was equally important for the club. Leupolz has since become an indispensable member of Hayes’ midfield, injecting aggression and physicality to a team filled with creativity. On top of the pressing, tackling and intercepting, the Germany star scored five goals, among them some long-range scorchers.

There was an American invasion of the FAWSL over the past year. Tobin Heath, Christen Press, Rose Lavelle and Abby Dahlkemper all moved to England in search of fresh experiences, but it was Mewis who stood out the most. Manchester City were a completely different team with the 28-year-old in their line-up — her box-to-box energy, driving runs, long shot and aerial threat in the box adding a new dimension to the City midfield. Mewis may not extend her stay in England beyond one season, but even if so, she has left an indelible mark on the league.

Earlier this season, I wrote that Kirby was back to her best. Well, I was wrong; she is even better than she’s ever been before. Returning from a career-threatening heart problem, the 27-year-old found another level, scoring 16 goals and setting up 11 in 18 appearances. Those are career-best numbers, but they alone don’t really do Kirby justice. Some goals are more important than others, and she managed to find the net against all of Chelsea’s three biggest rivals — Manchester City, Arsenal and Manchester United. Of all Chelsea’s star performers, Kirby was the most integral to their success.

Kerr formed an outstanding partnership with Kirby to power Chelsea to the title, scoring 21 goals in 22 games in her first full season of FAWSL soccer. The Australian’s speed, runs, aerial threat and hold-up play were crucial to the champions’ attacking game, and she carried the fire on her own when necessary. Kerr finished three goals ahead of Arsenal legend Vivianne Miedema, winning the FAWSL Golden Boot in the process. What better way to silence those critics who questioned her finishing during her first few months at Chelsea?

Nobody in the FAWSL set up more shots or goals than Kelly this term. With 11 assists, she tied Kirby and McCabe, establishing herself as a key player for Manchester City after her move from Everton. As well as creating scoring opportunities, Kelly found the net consistently herself. With 10 goals, she was City’s joint-top scorer alongside Ellen White. Having clearly worked hard developing her crossing ability, Kelly is now a rounded winger capable of beating defenders on the dribble, shooting off either foot, or picking out teammates in the box.

Mary Earps, who kept Manchester United in several big games with her shot-stopping. Alex Greenwood, whose passing range and set piece delivery were pivotal for Manchester City. Caroline Weir, who produced more jaw-dropping moments of ingenuity in City’s midfield. Leah Galton, who looks more and more like an international-caliber winger on the left side of Manchester United’s attack. And Miedema, who led the line excellently once again even as Arsenal struggled.

PLAYER OF THE SEASON: FRAN KIRBY

There was only ever going to be one winner. Kirby’s resurgence after a career-threatening illness was both inspirational and impressive, a showing of real individual resilience. Her ambition and drive meant she remained an un-droppable part of Chelsea’s attack, even in the presence of Sam Kerr, Pernille Harder and Beth England. Kirby’s dribbling, passing, finishing and work ethic make her one of the finest forwards in world soccer right now.

Manchester United may have failed to make the Champions League after their fourth-place finish this season, but the future remains bright with Toone in the line-up. The 21-year-old was the FAWSL’s top-scoring midfielder with nine goals and, possessing a good shot from long range, clever movement and ability to play almost anywhere behind the strikers, Toone has the potential to be a superstar.

MANAGER OF THE SEASON: EMMA HAYES

Chelsea have a lot of talent, but they are also managed brilliantly by Hayes. With the FAWSL arguably more competitive than ever before, winning the title was no guarantee even for a team with Chelsea’s star power. But Hayes took a great group of players and made a winning team, one that became only the third side in FAWSL history to retain the title. Next up: the Champions League final. Nobody will relish the challenge more than Hayes.