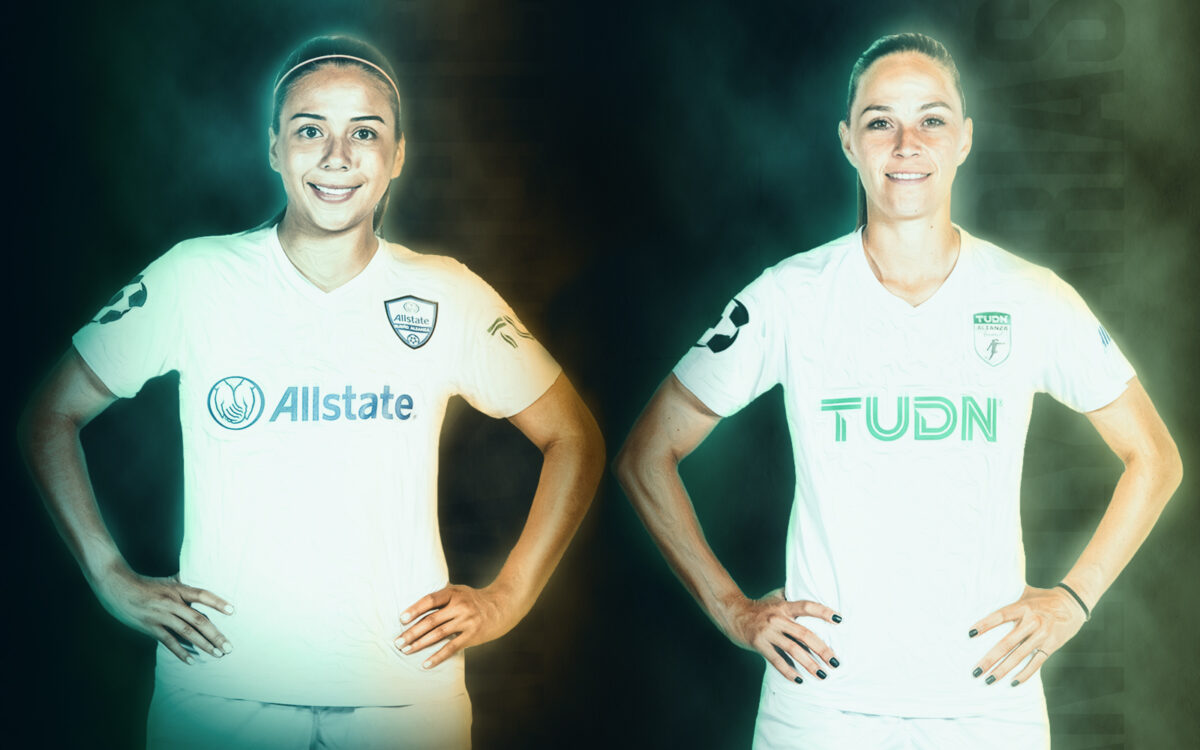 This story starts with a travel through time, diving into a day in the life of two Mexican households in the United States.

First, it is around 1995 in Santa Ana, California, south of Los Angeles. A father is about to leave for soccer practice; he coaches a team which his sons play for. Janelly Farías is 5 years old — younger than them — but she is already used to asking her dad to take her with them. She wants to play soccer with her brothers.

Fast-forward to the year 2000, moving north until we reach American Falls, a tiny town located in Idaho. At 4 years old, María Sánchez hears a familiar sound coming from the TV: her dad is watching a Liga MX match. Her older brother just went out with friends to kick the ball on the street, and she rushes to follow him.

Farías and Sánchez grew up surrounded by soccer, a sport that runs deep in their blood, and so it’s not surprising to see that they ended up playing professionally and for México’s national team. Still, they both found enormous obstacles on their way up, some of them recurring among women players of Hispanic heritage — journeys which stand in stark contrast to the aura that envelops the United States as the promised land of women’s soccer.

“I didn’t play club soccer because my parents couldn’t afford paying for it, or even taking me to training sessions,” says Sánchez. “My very first taste of a competitive environment was when I came to Idaho State University, so perhaps I could have reached a higher level if I had had other opportunities.”

Farías, now 31, points to the importance of having the support of the family and getting to know role models that may encourage girls to pursue their career in soccer. “We’re used to hearing ‘no’ [you can’t play], and things get complicated when it happens. So it’s important for them to work on the psychological part, to believe in themselves.”

Now wearing the colors of Tigres UANL and Club América, respectively, in Liga MX Femenil, Sánchez and Farías are also ambassadors of Alianza de Fútbol, a national organization dedicated to the support and development of amateur Hispanic soccer in the United States. Starting this summer, a program of free tryouts for girls born between 2000-2006 — called All State Sueño Alianza — will tour 10 cities and aspiring pro soccer players will have the chance of being scouted. In addition, women’s teams will face each other at TUDN Alianza Femenil tournament, which has been running since 2015, while girls Under-16 will compete in Copita Alianza.

Joaquín Escoto, director of Alianza de Fútbol, tells The Equalizer that he expects to host around 4,000 women’s players and almost 200 teams this year.

“We’re very proud to have in place a free program for Latina girls where they can show their skills,” he said. “Pay-for-play is not a barrier here. Men and women’s soccer have different realities, and so with girls we like to offer them different pathways, be it getting scouted by Liga MX Femenil and NWSL teams, or finding a route to college. That’s important for first-generation Mexican parents that didn’t have the chance of going to university.”

Reaching new horizons thanks to soccer

To Sánchez, whose NWSL rights were recently acquired by the Houston Dash from Chicago Red Stars, soccer literally enlarged her world.

“When I was growing up, big cities were very far away,” she said. “Without the grant I got from the national team, I’d still be living in my tiny town. Thanks to soccer, I got lots of opportunities. I got to know new countries; it gave me a new life.”

In her own words, it’s a sport that “engages” people through “how the game flows, its ease. You don’t have timeouts, so players are in action nonstop.”

And there are not only physical horizons. Farías knows it best: “People ask me why do I keep on playing after needing four surgeries. Everything is here [pointing to her head], that’s the key. You need to be resilient. Soccer is all about mistakes; the winner is the one who recovers and refocuses faster.”

Farías’ relationship with soccer has been double-edged, both on and off the field. During her senior year in college, she stepped away from the game when her family had a hard time accepting she was gay. A proven midfielder, she ended up falling in love with the game after some time. Later on, she was asked to move back her position and adapt to center back.

“At first, I didn’t like it at all,” she says with a laugh. “I had even played as a ’10’ before. So, my first reaction was ‘what?’ It was difficult to grasp, but now I love it. Not everybody understands the difficulty of having no margin of error. But still, the moment you assume the responsibility, you grow up mentally.”

For soccer fans, raw talent used to be central when judging a player. And yet, interestingly enough, footballers tend to prefer focusing on different and usually overlooked aspects. Sánchez emphasizes the importance of being passionate: “You need to love the sport. I had to defeat the odds, because going pro was always going to be very difficult to me. I found out that that was my driving force and motivation.”

Now, after fulfilling their childhood dreams — and even their brothers’ and fathers’ dreams — they want to give credit to Alianza de Fútbol programs, a choice that didn’t exist when they were growing up.

Both players remarked how crucial it is to have new spaces for Hispanic girls, where talent can emerge. Ultimately, both México’s El Tri Femenil and the United States may benefit from the pool of young Mexican American players enjoying an improved pathway for their soccer careers — and their lives, too.

As Farías notes, “soccer transmits many beautiful things. It can change a culture; it can change anyone’s perspective or mentality. It has such an extraordinary power. Soccer can change lives and it defines cultures.”