FAWSL Roundup: Chelsea in control on top; Arsenal all but secure third 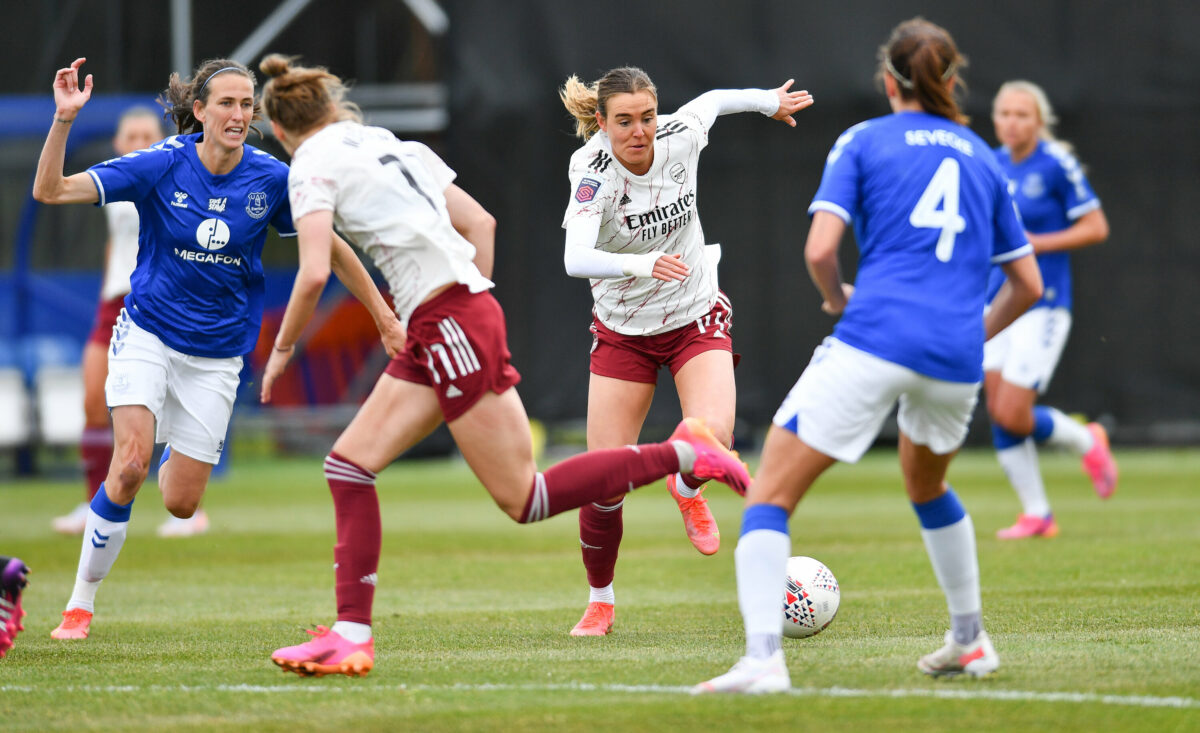 Photo by Will Palmer/Sports Press Photo.

This past week in the FA Women’s Super League saw Chelsea stay in control of their title hopes, while Manchester City, level on points but with an inferior goal differential, sit in second and are forced to hope for a Chelsea slip up in the last match of the season.

Arsenal all but officially secured third place too. Though a loss from Arsenal and a win from United this coming weekend could level the two teams on points, the tie breaker is goal differential, and Arsenal have United beat on that front by 26 goals.

Meanwhile, the tight relegation battle at the bottom of the table continues.

Read on for all the news and highlights from the league ahead of the final matches on Sunday, when all games will be played at 9:30 am ET.

One game to go 👀#BarclaysFAWSL pic.twitter.com/xDcBHcIyyp

On the heels of their triumphant Champions League semifinal win against Bayern Munich on Sunday, Chelsea also remained in control of their league title fate with a win against Spurs on Wednesday.

A brace from Sam Kerr – the first a tap in on a cross from Guro Reiten, and the second a finish off of her own rebound – secured the 2-0 win. Chelsea’s hope to win the quadruple – the League Cup (which they’ve already won), the FA Cup, the WSL, and the Champions League – are still alive.

A brace by Chloe Kelly, and goals by Esme Morgan and Sam Mewis sealed a 4-0 win for Manchester City over Birmingham City on Sunday.

But it wasn’t all positive for City on the day, as Kelly – who, with 10 goals and 11 assists was having a fantastic season – went off injured in the second half. The club confirmed that she “is set for an extended spell on the sidelines after suffering an ACL injury to her right knee.”

And on Monday, The Equalizer’s Dan Lauletta and John Halloran reported that Mewis will be returning from City to the North Carolina Courage ahead of the Olympics this summer:

Multiple sources have confirmed to @JohnDHalloran and me that Sam Mewis is on her way back to the #NWSL and North Carolina Courage. This is expected to happen ahead of the #USWNT trip to Japan for the Olympcs

A 94th minute penalty kick earned Arsenal three points on Sunday over Everton, which all but secured third place for the Gunners and a spot in the Champions League next season.

Katie McCabe – who signed a long-term contract extension with Arsenal on Tuesday – opened the scoring in the 22nd minute. Flicked on by Caitlin Foord, McCabe was able to get her shot up and over Everton keeper Sandy MacIver.

But Everton equalized in the second half. Izzy Christiansen sent in a high, lofted ball that wasn’t dealt with by Arsenal’s defence. Instead, Megan Finnigan got her head on it to level the score.

Just as this one looked to be headed for a draw, McCabe drew a foul in Everton’s box late into stoppage time. Captain Kim Little stepped up to the spot and delivered a perfectly placed shot into the upper 90:

What a moment.
What a penalty.
What a player. pic.twitter.com/VFeLWNhGjV

On Sunday, a good Bristol City performance was undone in the 78th minute by an own goal. Manchester United, held scoreless for most of the match, went ahead when Christen Press cut to the goal line and delivered a cross that hit United’s Jane Ross, then the post, then was mistakenly tapped in by Bristol’s Yana Daniëls.

It was a disappointing result for Bristol, who hit the crossbar in the first half and had a few more chances of their own throughout the match. With just one match to play, they sit in last place and occupy the lone relegation spot, two points below Aston Villa. However, on paper, Bristol have the easier match on the weekend, as they travel to play Brighton, whereas Aston Villa will be headed to London to play Arsenal.

It was a back and forth affair on Sunday between Reading and Brighton, two clubs sitting comfortably in the middle of the WSL table. A penalty kick by Reading’s Fara Williams opened the scoring in the first half, and Danielle Carter added a second just minutes later. But just before halftime, two goals in two minutes from Brighton’s Lee Geum-min levelled the score.

Reading’s Natasha Harding scored the winner in the 55th minute, when she ran onto a long ball and slotted her shot through the legs of Brighton keeper Megan Walsh.

Williams, who made 172 appearances for England (the country’s most capped player), five for Great Britain at the 2012 Olympics, and has been a mainstay in club football in England for two decades, announced last week that she will be retiring from the sport at the conclusion of the season. Highlights from the match include a tribute to Williams, as well as her stylish penalty goal:

Aston Villa and West Ham played to a scoreless draw on Sunday. Arguably the best chance of the match came for Villa in the second half, when Shania Hayles ran onto a through ball and was one-on-one with West Ham keeper Mackenzie Arnold. But Arnold was equal to the task, and made two point blank saves in succession to deny the striker.

Aston Villa have now gone four matches unbeaten in the league, but have a tough final match against Arsenal on Sunday. West Ham – currently in 9th place and three points ahead of Bristol City in the relegation spot – also have a tough game in store against Manchester City.