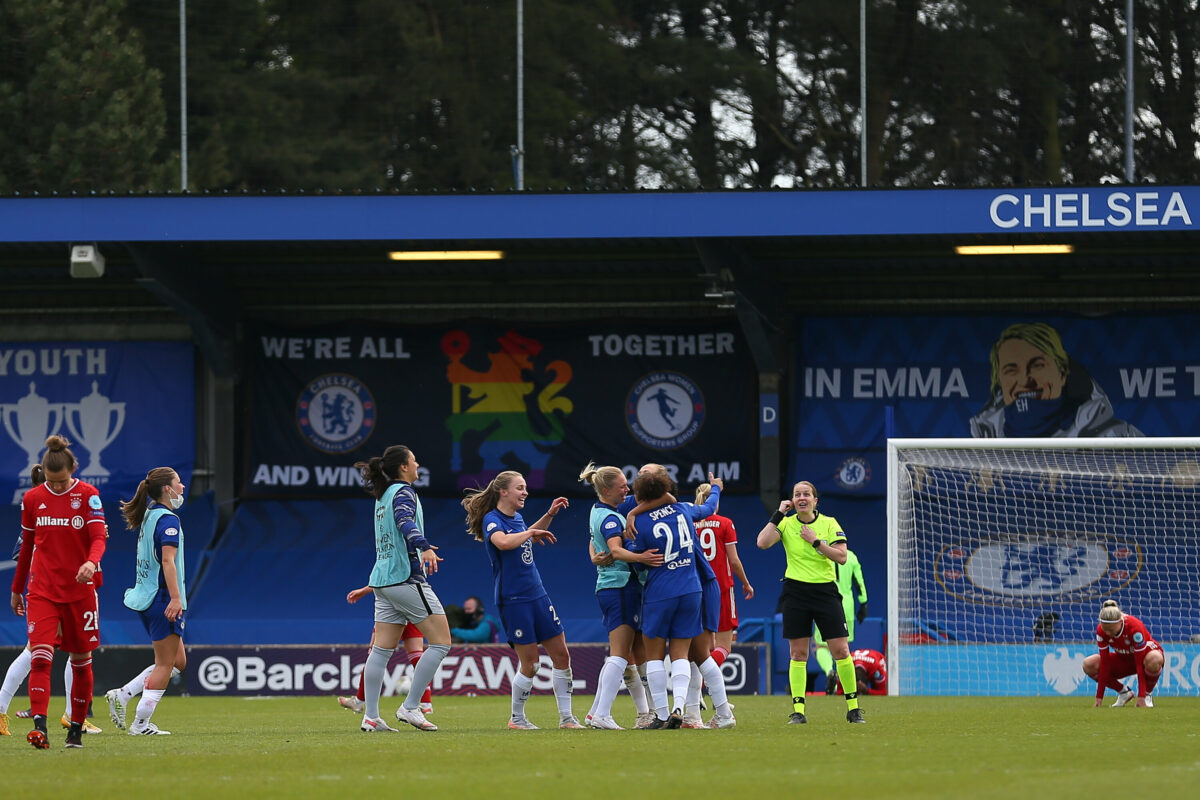 Barcelona and Chelsea advanced to the UEFA Women’s Champions League final with victories on Sunday, guaranteeing there will be a first-time winner of the competition. The final will be contested on May 16 in Gothenburg, Sweden.

Barcelona advanced with a 2-1 victory at home over Paris Saint-Germain (3-2 aggregate) and Chelsea secured a spot in the final for the first time with a 4-1 home victory over Bayern Munich (5-3 aggregate). Barcelona is in the final for the second time in three seasons, having lost to Lyon in 2019. Chelsea still has hopes to win the quadruple; the Blues are expected to clinch the FAWSL title in the coming week.

Lieke Martens scored twice in the first half to secure Barcelona’s victory, exposing PSG fullback Ashley Lawrence on both occasions. Martens’ first goal came from direct play down Barcelona’s right side, while her second was a result of a back-post run on Lawrence’s blind side.

Marie-Antoinette Katoto scored three minutes after Martens’ second goal to keep PSG in the game, but the Parisians needed a second goal to advance on the away-goals tiebreaker. They could not find it, and looked more likely to concede in the second half as Barcelona hit the woodwork twice in a minute midway through.

PSG had advanced to the semifinals by knocking out French rivals Lyon, who are five-time reigning European champions.

Fran Kirby scored twice in what was ultimately a lopsided score, including tallying Chelsea’s fourth and final goal of the day into an empty net on the last kick of the game.

Last kick of the game: Fran Kirby, empty-net goal. Chelsea are through to the #UWCL final. pic.twitter.com/2NLCJsqf0J

Kirby opened the scoring 11 minutes into the match by combining with Sam Kerr, as she has done throughout the entire season. Ji So-yun restored Chelsea’s lead on the day just before halftime on a rebounded free kick which froze Bayern goalkeeper Laura Benkarth, who appeared to have an obstructed view.

1-0 Chelsea early! 2-2 on aggregate and Chelsea have the away-goal tiebreaker at the moment. pic.twitter.com/yDPLyt7wW3

Bayern remained in the aggregate series, however, thanks to Sarah Zadrazil’s incredible half-volley in the 29th minute. It was 2-1 in favor of Chelsea at halftime and 3-3 on aggregate, with away goals even.

Pernille Harder then scored on a header in the 84th minute after Bayern Munich gave up a free kick just outside the box, leaving Bayern to push on for another goal in the final minutes (one which would have sent the visitors through on the away-goals tiebreaker). Instead, Benkarth was caught upfield on a turnover, and Chelsea counterattacked to an undefended goal, allowing Kirby to pass the ball into the net.