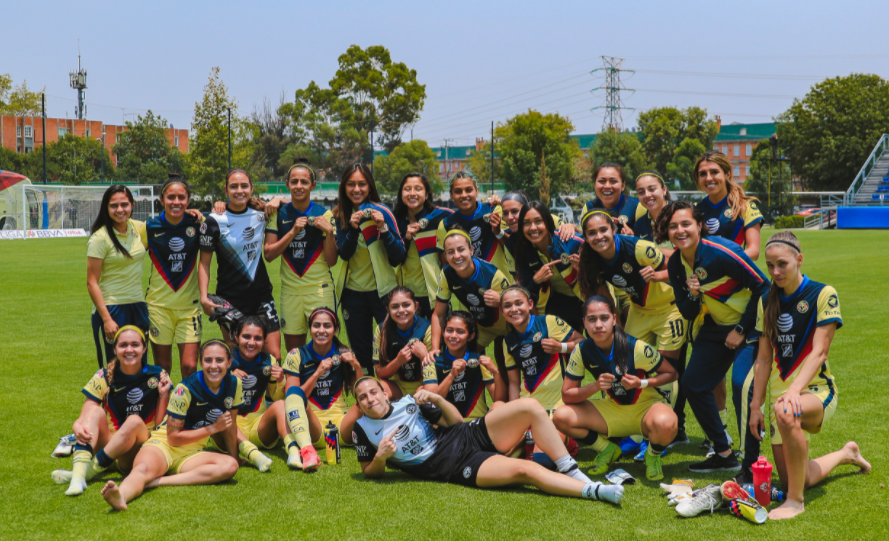 The Liga MX Femenil table has been tight up top all season between Tigres, Chivas and Atlas. However, the middle of the table is where all eyes were glued this past weekend. The top eight teams qualify for the Liguilla, which is the playoffs. Holding on to the eighth place spot for the last few weeks has been Cruz Azul.

However, Club América put up a big 2-1 victory at home against Cruz Azul to slip into the spot. Now, its Club America’s spot to lose.

There was no Liga MX Femenil match more important than this one. The top seven spots are already clinched, but the eighth-place spot was still up for grabs, coming down between these two clubs. Cruz Azul attempted to hang on, but Club América was unmatched at home.

Talk about a nail-biter, too. Club América scored first, courtesy of Daniela Flores in the 28th minute. Flores cut past Cruz Azul midfielder Paola Gonzalez, inside the box, and slotted her shot past Karla Morales. To open up the second half, Janelly Farias scored on a corner kick play in the 51st minute.

The ball originally hit off a Club América player and took a lucky bounce to a wide-open Farias at the far post. Farias’ shot was even sweeter as she slipped it between the legs of Morales.

However, Cruz Azul attempted to mount a comeback. Rebeca Villuendas scored in the 83rd minute, taking a shot from about 30 yards out and chipping goalkeeper Renata Masciarelli. Despite the stellar shot, Cruz Azul could not get past Masciarelli for a second time to equalize or a third to win.

Here’s the scenario for eighth place. Currently Club América occupies the spot with 24 points, while Cruz Azul slipped down to ninth place with 22 points. Cruz Azul must win their match against Queretaro — who sit in 13th place — on Friday and Club América must lose against Puebla — who are second-to-last on the table — on Sunday for Cruz Azul to re-take eighth place.

However, if Cruz Azul draws or loses to Queretaro, Club América will take the eighth place spot, even if they lose or draw against Puebla.

My how the tables have turned. Early in the season, Monterrey had no problem putting up five goals against opponents. Now, it was Chivas’ turn to put five goals up on “Rayadas.” And, to the shock of every Chivas fan, it wasn’t Alicia Cervantes that was netting all the goals — in fact, Cervantes didn’t start or suit up for Chivas.

Instead, Joseline Montoya scored three goals, all coming in the second half. Her first was off a penalty kick in the 60th minute. Seven minutes later, Montoya notched a brace with a slip inside box and a one-touch tap in Alejandra Godinez’ net. Her final goal came in the 90th minute, to put the final nail in the Monterrey coffin, with a chip at the top of the box after weaving around her defender.

All of the Chivas goals came in the second half. To kick off the scoring, Isabella Gutierrez scored after picking up a poor pass-back by Monterrey in the 51st minute. Not even a minute later, Chivas doubled their lead, courtesy of a Christian Jaramillo strike.

The talk of the town wasn’t even the five goals, but the celebration of Gutierrez after scoring her goal.

Chivas took first place only for a moment with the victory. Then, on Monday night, Tigres drew with Mazatlan to retake the lead. Chivas will end their regular-season campaign by facing Tigres, in a battle for the top spot, on Monday, May 3, at 8 p.m. ET. Atlas is still technically in contention for the top spot, but it’s a far-fetch due to goal differential.

Tigres was stunned at home by drawing with Mazatlan on Monday night. In what seemed to be a easy win for Tigres, Mazatlan made the road to keeping the first place slot a little harder. Now, Tigres has Chivas breathing down their neck, as the two are separated by only one point — and will meet up this coming Monday.

Belen Cruz struck first for Tigres in the 35th minute, finding herself open inside the box and picking up the deflection from Mazatlan goalkeeper Mariana Zarraga. However, in the 40th minute, Liliana Hernandez of the visiting Mazatlan equalized on a penalty kick.

In the second half, Mazatlan took the lead, courtesy of Casandra Montero and her strike from outside the box in the 59th minute, chipping Tigres goalkeeper Vania Villalobos. However, the lead didn’t last long, as Lizbeth Ovalle found a Tigres tying goal in the 62nd minute. Ovalle scored on a free kick, directly hitting it into net. Goalkeeper Zarraga leapt up and got her fingertips on it, but couldn’t keep it out of net.

It’s a tight race for first place between Tigres and Chivas, as the two sides will duke it out in the final week of regular-season action.

*Final week of regular-season action before the Liguilla!

Saturday, May 1: Mazatlan vs. Santos Laguna at 11 AM

Saturday, May 1: Pachuca vs. Atletico San Luis at 11 AM