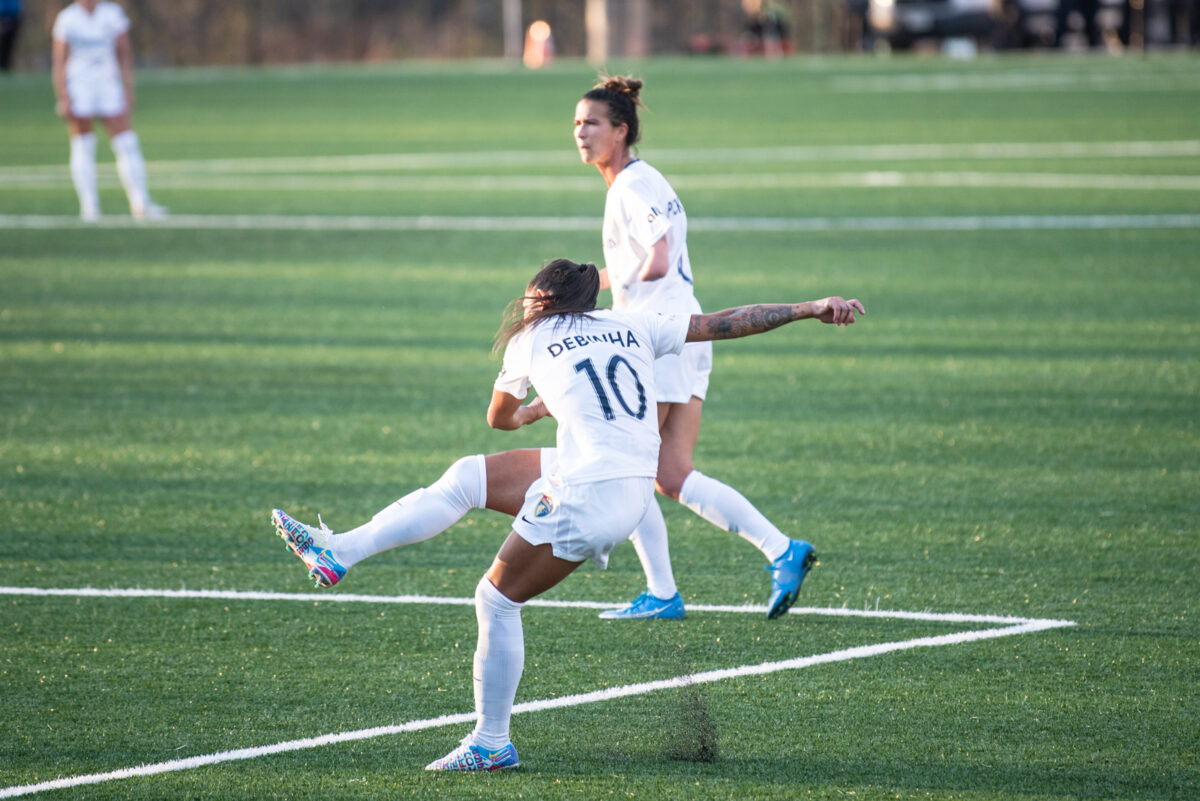 On the last Monday of April, the North Carolina Courage completed an impressive comeback to defeat Racing Louisville at the newest home of NWSL soccer, Lynn Family Stadium. The game was a back and forth affair as both teams scored numerous goals, taking and conceding the lead. Racing took the lead 25 minutes in through Cece Kizer but the Courage equalized just 10 minutes later. Kristen Hamilton scored that goal but it was Debinha who would finally put NC in the lead in the 57th minute. Jorian Baucom equalized for Racing with 15 minutes left to go but unfortunately they would concede again after some terrific work by Debinha.

The game started off incredibly open with lots of chances being created but no goals. The drama started early as Carson Pickett was issued a yellow just 11 minutes into the game for pulling down Erin Simon. Not long after, it was Simon who sent in the cross that was headed down near post by Kizer for the first goal of the match and her second of the season.

The Courage offense however, was not contained much longer. It was Hamilton’s glancing header off Pickett’s corner delivery that sent the ball just too far past the outstretched hand of Michelle Betos, and in off the far post.

The two teams went into halftime with a goal apiece. Louisville had a strong first half defensively while the Courage struggled to find routes to goal. The Courage came out of the break clearly unhappy with that and put a lot of early pressure on Louisville. Jess McDonald’s cross into Lynn Williams forced this brilliant kick save out of Betos, even though Williams was offside.

the save from Betos 🤯 pic.twitter.com/GRfyFyTS2n

North Carolina continued to push and got their reward in the 57th minute through Debinha. Williams did well to drive down the side and cut into the box, and even though her cross was cut out, the deflection was picked up by McDonald and calmly passed to a wide open Debinha at the top of the box. The Brazilian superstar made no mistake as she took a touch to set herself up and fire it top corner, giving the keeper no chance.

Who else but Debinha?! The Brazilian puts the Courage ahead!#LOUvNC | 1-2 pic.twitter.com/icsWKlSYE7

With 15 minutes left, Christy Holly looked to make changes in search of an equalizer, so he subbed on Jorian Baucom. The non-roster invitee made an immediate impact with one of her first touches of the game leveling the score at two with an outside of the boot flick. Kizer continues to show impressive skills since being taken by Louisville in the expansion draft, providing the assist for the goal.

We knew the goals weren't done and with one of her first touches of the game Jorian Baucom equalizes for Racing!! What an assist by Kizer and outside of the foot finish 🔥#LOUvNC | 2-2 pic.twitter.com/fSnQhc9Y0B

Debinha would once again come to the rescue, linking up with Williams to fire a shot at Betos. The keeper couldn’t help but give up the rebound, and it ricocheted back towards the goal line. Debinha followed the ball, and put enough pressure on Julia Ashley to prevent her a clear goal line clearance. Instead, Ashley kicked the ball off the inside of the post for an unfortunate own goal.

Strong offense of NC causes trouble again, unfortunate for Racing after a terrific save by Betos as Ashley kicks the ball in off the post when trying to clear it off the line and North Carolina are up with 5 minutes to go#LOUvNC | 2-3 pic.twitter.com/1Z0zDVwdGP

With five minutes plus stoppage time to go the Courage did well to waste time and hide the ball in the corner to hold out for the win in the end. Paul Riley will be disappointed in the number of goals his side have given up these past few games but this result means the top spot in the East is still up for grabs for any team, except Racing.

North Carolina will next face Orlando at their home, for a big May 1st matchup on CBS Sports Network. Louisville will face Gotham the next day in New Jersey.