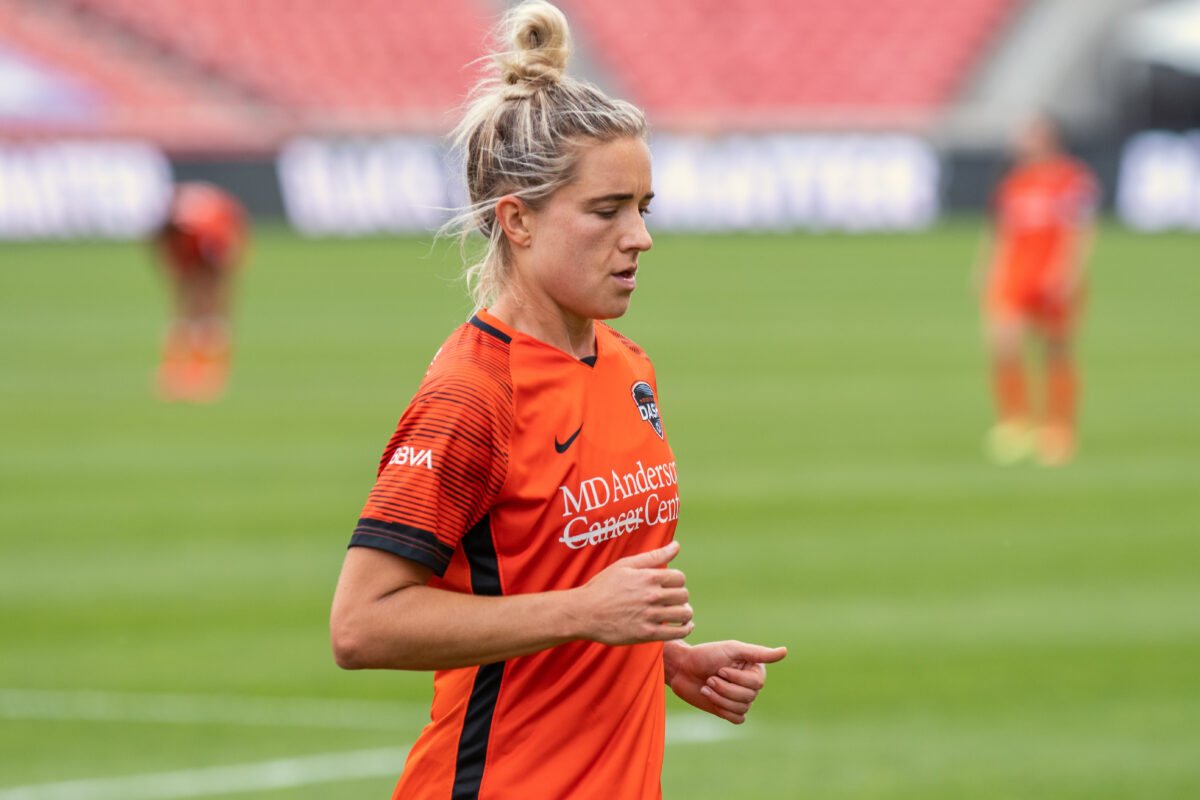 A brace from Kristie Mewis, and a goal from Rachel Daly earned Houston Dash three points on Monday night against Kansas City at Children’s Mercy Park. Michele Vasconcelos pulled one back for Kansas to ruin the Dash clean sheet, but her team’s attack was largely stunted on the night.

Mewis opened the scoring in the 25th minute, when she received the ball on the edge of the box from Daly. She took a quick touch to create separation for herself, and fired a shot across goal that beat Kansas City keeper Nicole Barnhart.

What a goal from the edge of the box, and the Dash lead! #KCvHOU pic.twitter.com/Q2SpTBOGPV

Daly added the second just moments before halftime. After being fouled by Rachel Corsie, Daly stepped up to the spot and slotted her shot perfectly into the bottom right corner.

Rachel Daly buries the penalty to give Houston the 2-0 lead! #KCvHOU pic.twitter.com/PqnwB4xuKC

And the Dash pressure didn’t stop there. In the second half, Mewis added to her tally, assisted from a strong run by Nichelle Prince. Prince withstood a tackle down the wing, and sent in a low cross to Mewis who was waiting at the top of the goal area. She calmly finished the cross past Barnhart, concluding her brace in her return from international duty.

Nichelle Prince works it on the wing, and delivers to Kristie Mewis, who's there with her left foot again! #KCvHOU pic.twitter.com/3SW54x27zK

A clean sheet wasn’t in the cards for Jane Campbell and the Dash, as Vasconcelos got Kansas City on the board in the 77th minute. On the counterattack, Lo’eau LaBonta played a great ball that split through Houston’s defenders. Vasconcelos ran onto it, and was able to beat Campbell with a rising shot. But after the defensive lapse, Kansas City’s attack was again largely snuffed out by Houston, and the match was finished out comfortably for the visitors.

And that's it for the Dash's shutout streak!

Michele Vasconcelos gets in between the Dash defenders, and beats Campbell! #KCvHOU | 1-3 pic.twitter.com/hbjFgfrGs1

Houston will return home to host Portland for their last Challenge Cup match on May 2nd, while Kansas City will play hosts to OL Reign the next day.