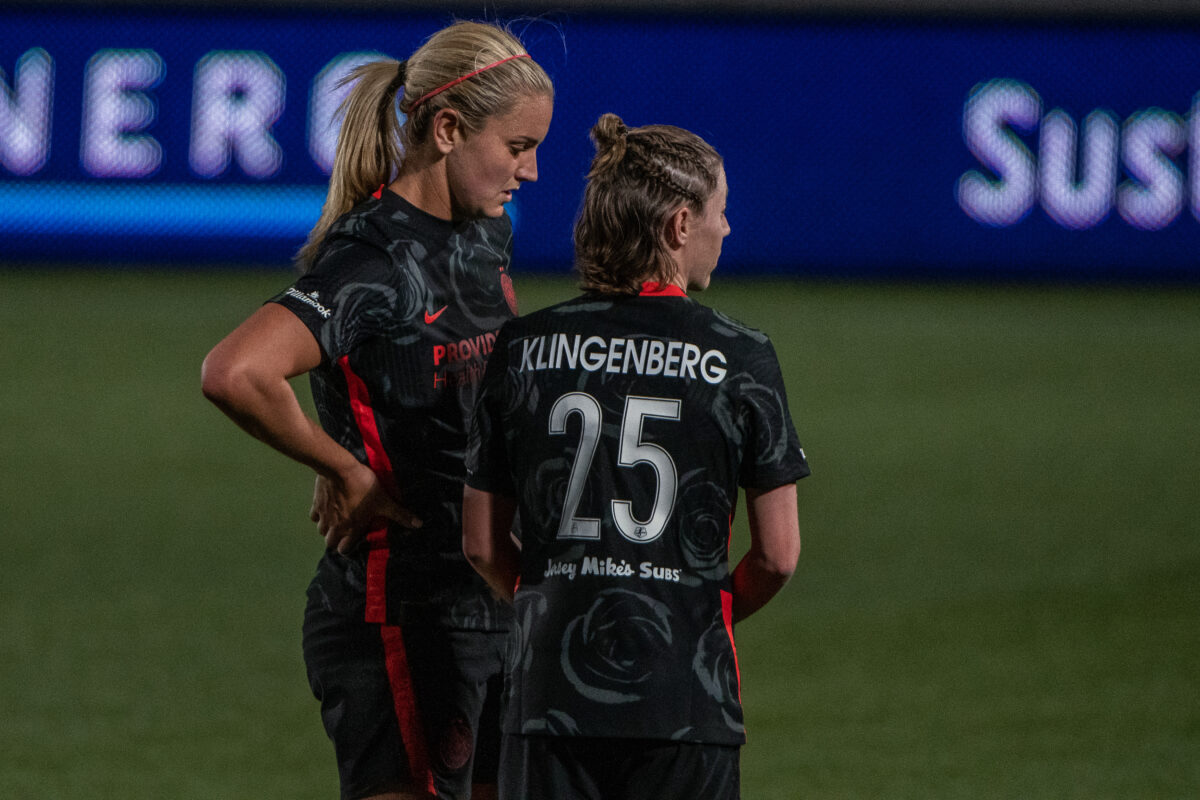 To finish off a busy night of National Women’s Soccer League Challenge Cup action Portland Thorns beat their Cascadia Rivals, OL Reign, at home 2-0. The Reign created some good chances but in the end their inability to convert allowed Lindsey Horan’s early goal to be the winner, with Simone Charley’s goal from the very start of the second half adding insurance. With this win, the Thorns clinch top spot in the West and guarantee they will play in the Challenge Cup Championship match.

For the first 15 minutes both sides traded chances as they tried to find a rhythm but in the 17th minute Horan would find the breakthrough. After Amber Brooks brought down Sophia Smith just outside the top of the box, Horan stepped up to take the kick and placed it perfectly in the corner, around the wall and just out of the reach of Reign keeper Karen Bardsley.

Despite the end scoreline Bardsley, on loan from Manchester City, made several crucial saves to keep OL Reign in the match. She prevented her side from going down another goal just before half as she made a good stop and her defenders did the rest with some miraculous goal line defending.

Somehow the Reign escape conceding another goal after a save from Bardsley and a goal line clearance! Thorns go into halftime with just the 1 goal lead thanks to The Great Horan! #PORvRGN pic.twitter.com/IQkleh1xt6

The Thorns went into halftime with just the one goal lead but moments into the second half Charley changed that score, pouncing on the rebound from Bardsley’s save, side footing it home on the volley.

The Thorns start the second half off with a goal! Charley pounces on Horan's rebounded shot to give them a two goal lead seconds into the restart.#PORvRGN | 2-0 pic.twitter.com/IteqLZPZyA

While the Thorns started all their returning internationals in Horan, Crystal Dunn, Becky Sauerbrunn, Christine Sinclair, and Sophia Smith, OL Reign waited until the second half to bring on their big returning names. Reign original and Welsh legend, Jess Fishlock, was subbed on in the 50th minute while her teammate of 9 seasons, Megan Rapinoe, was subbed on 5 minutes later, surprisingly to the cheering of Thorns fans. Their return is incredibly exciting for the Reign and you could see how they raised the energy for the time they were on the pitch, but they were unable to change the outcome of this match.

OL Reign’s best chance of the night came from Rapinoe in the 80th minute when she did well to control the ball in the box and get a shot off but was denied by AD Franch.

Substitute Morgan Weaver had two close chances in the last 10 minutes of the match but couldn’t quite get her shots on frame. The game finished with the Thorns winning 2-0, and now 3 wins for 3 in this Challenge Cup, while the Reign have yet to find the back of the net this season.

OL Reign next play Chicago on April 27 in Tacoma. Portland will play their last group match of the competition against Houston on May 2 at BBVA Stadium.