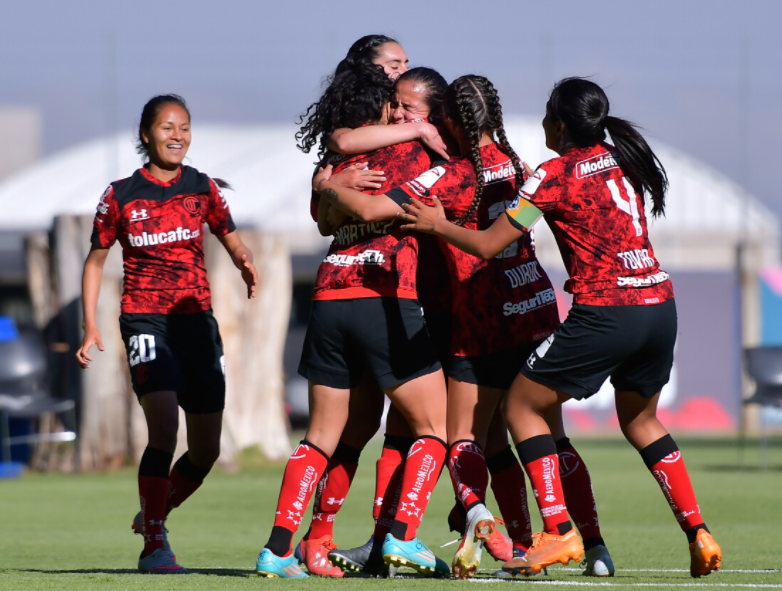 Liga MX Femenil returned this past weekend after the women’s international break. Star players returned to their clubs in the hope of make a push toward the top in the final weeks of action. Week 15 concluded with all eyes taking note of the coveted eighth place spot and who is pushing for a final playoff spot.

Here’s a breakdown of what happened in Mexico this weekend.

Cruz Azul currently sits in the eighth place spot. In Liga MX Femenil, the top eight teams go into the playoffs round called the Liguilla. A loss against Chivas, at home, didn’t help Cruz Azul in their desire to hang on to the last playoff spot.

Cruz Azul has 22 points, and Club America is hot on their heels with 21. On Friday, Cruz Azul gave up a goal to Chivas in the 87th minute. Christian Jaramillo scored on a penalty kick. She shot the ball toward the lower right corner of the net, and Cruz Azul goalkeeper Karla Morales dove the correct way, but the ball slipped underneath her.

The penalty was given up by Paola Gonzalez.

Next week is a huge match in the middle of the table. Cruz Azul will hit the road to face Club America, potentially deciding a playoff spot. In the final week of action, Cruz Azul will host Queretaro.

Pachuca have had an outstanding two matches in the last couple weeks of Liga MX Femenil competition. Victories over Tijuana and now Mazatlan have helped Pachuca move up the table into a more comfortable playoff position. Pachuca can still surprise and finish higher, but right now the team remains in sixth place with 27 points.

In the club’s latest win, Pachuca scored two late second half goals on the road. Alice Soto scored in the 82nd minute off a strike outside the box. Mazatlan gave Soto the space, and she dribbled up to an open spot to get the shot off.

Six minutes later, Karen Diaz scored off a header on a free kick play. Diaz went one-on-one with a Mazatlan defender and sent the ball to the far post.

Pachuca will finish the Liga MX Femenil season with matches against Necaxa and Atletico San Luis.

Toluca spent the early part of the Liga MX Femenil season toward the top of the table. For the last few weeks, the team has bobbled in and out of the playoff bracket. A win against Santos Laguna last weekend helped Toluca get back on track and in the seventh-place spot.

Toluca was at home and provided another late-match goal. Yamanic Martinez scored in the 83rd minute off a one-touch shot that followed an excellent cross. Martinez was left wide open inside the box for the tally.

Toluca quietly sit in seventh place with 26 points, giving them a small cushion ahead of that eighth place final spot. Next week Toluca is on the road, taking on Atletico San Luis, while the final week has them hosting Pumas.

Club America had a big opportunity to scoop up three points and take the eighth place spot, especially after Cruz Azul fell to Chivas at home. However, Monterrey spoiled their plans and forced a draw. Both teams split the points, and now Club America needs victories in their last two matches, and a few dropped results from Cruz Azul.

Monterrey struck first, courtesy of Dania Perez in the 32nd minute. Perez scored off a volley at the post, after a terrific cross inside the box by Daniela Solis. Early in the second half, Club America equalized, as Mayra Pelayo-Bernal chipped the goalkeeper, who was trying to scoop up a loose ball.

Club America and Cruz Azul will play a deciding game on Sunday at 1 p.m. During the final week of action, Club America will take on Puebla.

With star power back from international duty on both sides — Renae Cuellar for Tijuana and the trio of Maria Sanchez, Sandra Mayor and Bianca Sierra for Tigres — Tijuana hosted Tigres and fell 0-1. Tijuana tried to make a push for a playoff spot, but are officially out of reach after their Week 15 result.

Tigres, on the other hand, continue to extend their first-place lead. Chivas is only three points behind in second place. However, Tigres, a powerhouse in Mexican women’s soccer, has shown no signs of slowing down. Belan Cruz scored the game’s lone goal against Tijuana on Monday night in the 14th minute.

Cruz out-ran goalkeeper Itzel Gonzalez and edged out two defenders for the skipping shot into an open net.

Tijuana is out of playoff contention, while Tigres looks to hold on to first place. Tigres will finish off the regular season with contests against Mazatlan and second-place Chivas.

England’s problems are greater than any one coach
It wasn’t pretty, but Chelsea’s draw with Manchester City was worthy of its title-deciding implications