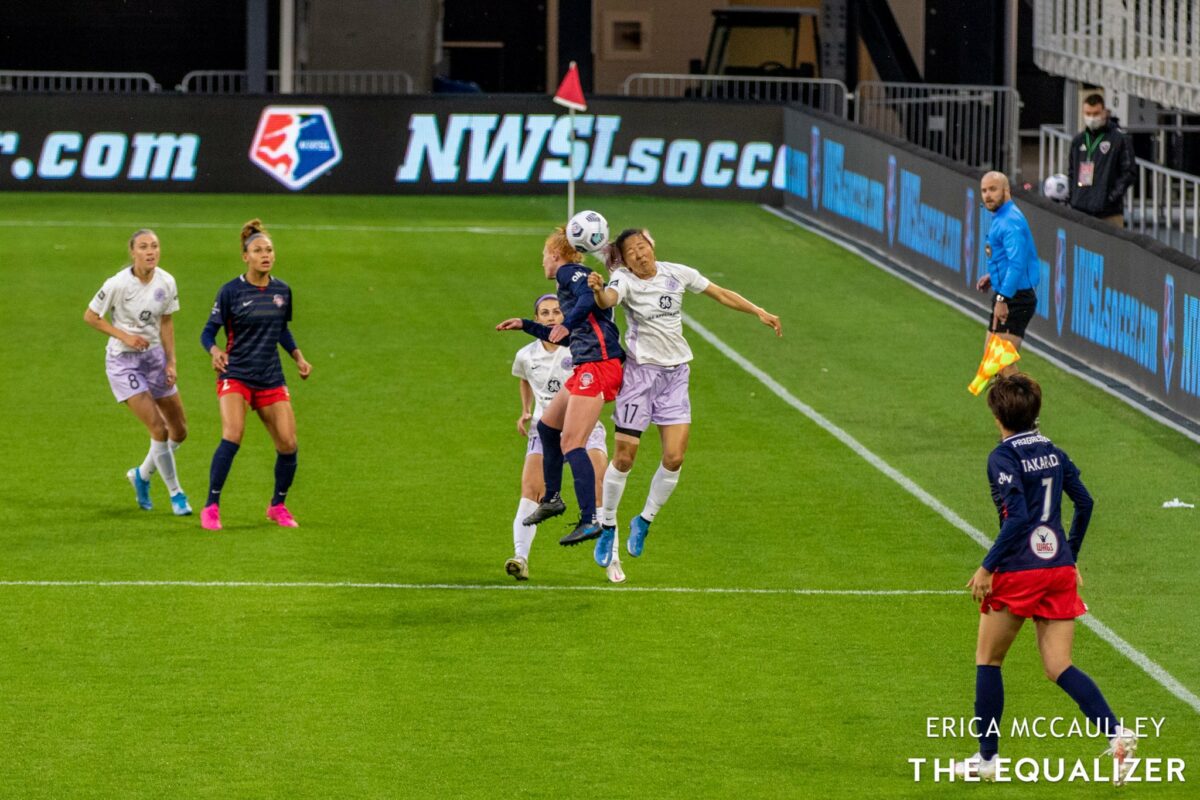 On Thursday night, the Washington Spirit played their first match of 2021 at Audi Field against Racing Louisville. The match featured the first and second picks of the 2021 NWSL Draft, Emily Fox and Trinity Rodman, respectively. In the end it was Rodman who was able to make the difference for her team as she assisted Ashley Sanchez’s stoppage-time winner to give Washington the late 1-0 win.

There were few chances in the first half as both defenses played really well and forced the majority of the game to be played in the middle third of the field. Emina Ekic had the best chance of the half in the 21st minute, as she used some fancy footwork to get herself in the box, but it was too easy for Aubrey Bledsoe in the end.

Two of the youngest teams in the NWSL went into half-time scoreless and that scoreline would remain for most of the game. As the minutes ticked past, both teams pushed hard for a winner, resulting in several chances for either side. Yuki Nagasato had a chance one-on-one with Bledsoe, but couldn’t finish.

Kizer finds Nagasato in behind the defense but she drags her shot just wide #WASvLOU pic.twitter.com/16KIgE6Lw0

Rodman was arguably the best player on the pitch for Washington, creating chances for herself and continuously working hard to win and keep the ball for her side. Her best chance of the night came in the 73rd minute when Sanchez found her all alone, but Michelle Betos did well to get across and make the save.

Rodman has a chance to put Spirit ahead but Betos makes a smart save pic.twitter.com/mlBYrOk36H

Entering the allotted five minutes of stoppage time Bledsoe made a crucial save on Savannah McCaskill to keep the match scoreless.

Both teams pushing really hard for winner as we enter 5 minutes of stoppage time and Bledsoe comes up with a crucial save pic.twitter.com/5LEFPWfFE0

Minutes later, rookie Rodman’s cross was met by Sanchez on the volley, who calmly sent the ball into the back of the net for a 93rd minute winner.

Brilliant 93rd minute winner from Sanchez as she smashes home Rodman's cross on the volley! pic.twitter.com/DNnJGiJ1we

Louisville continued to push but there just wasn’t enough time for them to find an equalizer.

Washington play next at Orlando on April 21st, while Louisville will look for their first NWSL win with home field advantage against North Carolina on April 26th.