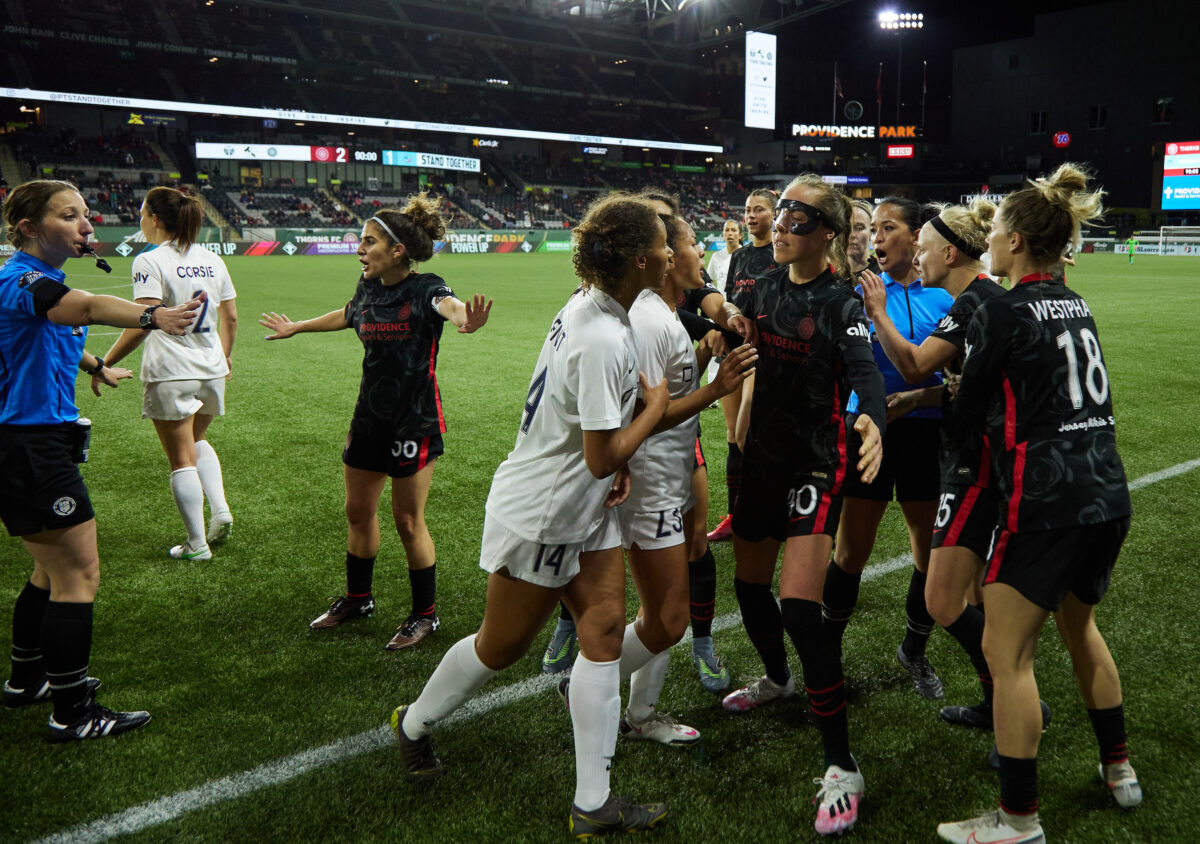 Opening weekend of the National Women’s Soccer League’s 2021 Challenge Cup did nothing to dispel the notion that the league has a propensity to attract chaos. On Tuesday, the league issued several fines and suspensions, and announced it had opened an investigation under its newly created anti-discrimination policy, all following incidents from the first days of competitive play.

First, the investigation: Chicago Red Stars defender Sarah Gorden tweeted over the weekend that, following her team’s Friday road game against the Houston Dash, she and her boyfriend were harassed by a security worker at BBVA Stadium while white players were free to interact with their families after the match.

My bf came to our game against @HoustonDash + after the game he came down steps to talk to me. We were immediately (before he was close 2 me)followed by security and told he would be arrested if he came close. Meanwhile white players were talking to white fam all over the stadium

I asked the security guard why he was only talking to us. He said he would go to them later. He never approached any of them. These players have multiple photos with their people.

The NWSL said on Tuesday that it has opened an investigation into the incident under its anti-discrimination policy. The NWSL Anti-Harassment Policy for a Safe Work Environment was recently adopted by the league to protect NWSL players and personnel, including against third parties. (Security staff at stadiums are typically third-party contractors.)

The policy is 16 pages long and can be read in full here.

News of the league’s investigation comes after the Dash made multiple attempts to publicly apologize, admitting in the second try that they got it wrong when they initially apologized to Gorden (calling her “a player”) for a lack of COVID-19 protocol enforcement.

The league said it will have no further comment until it concludes its investigation “and has asked the respective clubs to refrain from commenting further as well.” That leads us into the disciplinary part of things…

Panic at the NWSL DisCo

The NWSL announced a lengthy list of fines and suspensions on Tuesday (have we mentioned that only four games have been played so far this year?). Related to the above, NJ/NY Gotham FC and the Chicago Red Stars “each received a fine for violation of a league directive.”

Neither the NWSL nor its teams could officially comment but all signs point to the following tweets being the sources of those fines, since club owners and board representatives were instructed not to comment on the investigation. Alyse LaHue is the general manager of Gotham and Sarah Spain is a new investor in the Chicago Red Stars (and also talent for ESPN, which makes for a particularly tricky situation):

We have an opportunity & ability to be leaders in this space in the way that @WNBA players & league have. But it takes us all: folks at the top, every staffer, even every fan. @sarahlgorden I'm so sorry for what happened to you & your loved ones.

We have so much work to do.

And to add to the news…

Kansas City’s Kristen Edmonds received an additional game suspension and an automatic fine for what the NWSL Disciplinary Committee deemed “major game misconduct” of the league operations manual. That is in addition to her suspension for the red card, so she will miss Kansas City’s games on April 20 against the Chicago Red Stars and April 26 against the Houston Dash.

From that same incident: Portland Thorns forward Morgan Weaver had her red card rescinded following the team’s appeal. Weaver was also ejected in stoppage time of Friday’s game, which Portland won, 2-1. Weaver can be seen instigating the incident before Edmonds strikes her in the face. Referee Danielle Chesky sent off Weaver after consulting with her assistant referee.

Thorns coach Mark Parsons had been sent off right before this… for abusive language toward the referee after Thorns forward Simone Charley was sent off. Four red cards in the match doubled the previous NWSL record for most in a match.

That is not even the end of this, however. Portland was issued multiple fines for Meghan Klingenberg’s postgame comments and for “a social media post” which was determined to violate league rules on public criticism.

One source says that the social media post violating league rules came from team owner Merritt Paulson and not from the team account. Paulson tweeted video and a photo of the incident and also tweeted in the moment that the Thorns would appeal Weaver’s red card, in addition to some replies to fans.

On Friday, the Thorns team account tweeted “Morgan Weaver is innocent” accompanied by the above video clip. Four days later, on Tuesday, the Thorns deleted that post and apologized directly to Gorden, who — among many others — pointed out the racialization of players by tweeting that.

We recognize that the intent of our post had an unintended impact. We remain committed to anti-racism, and will be even more conscious of our word choice going forward. Racism is not acceptable in any form.

… and back of Edmonds, and Edmonds struck Weaver in the face. AR2 advised the referee that both Weaver and Edmonds should be dismissed for violent conduct.”

“In the 90+1’ Mark Parsons, head coach for the Portland Thorns, was shown the red card for offensive, insulting and abusive language and/or actions.”

Here is the full Meghan Klingenberg answer about the end of that Portland-Kansas City game. #NWSL pic.twitter.com/WsPhjZ8rEC

Additionally (and separate from the incidents in Portland), Racing Louisville forward Jorian Baucom was issued a one-game suspension which cannot be appealed for “major game misconduct,” for her high-footed tackle on Ali Riley late in Louisville’s 2-2 draw with the Orlando Pride on Saturday.

So apparently this is what the ref thinks getting your ‘foot stepped on’ looks like 🧐 Was scared for my knee upon impact but luckily it was just my ‘foot.’ pic.twitter.com/XKRZMeozBW

Here’s the video of the play: pic.twitter.com/iaARfTO4xW

The Lowdown: Remembering the WUSA, 20 years later
WISL aims to fill the Division 2 women’s pro league void in the US