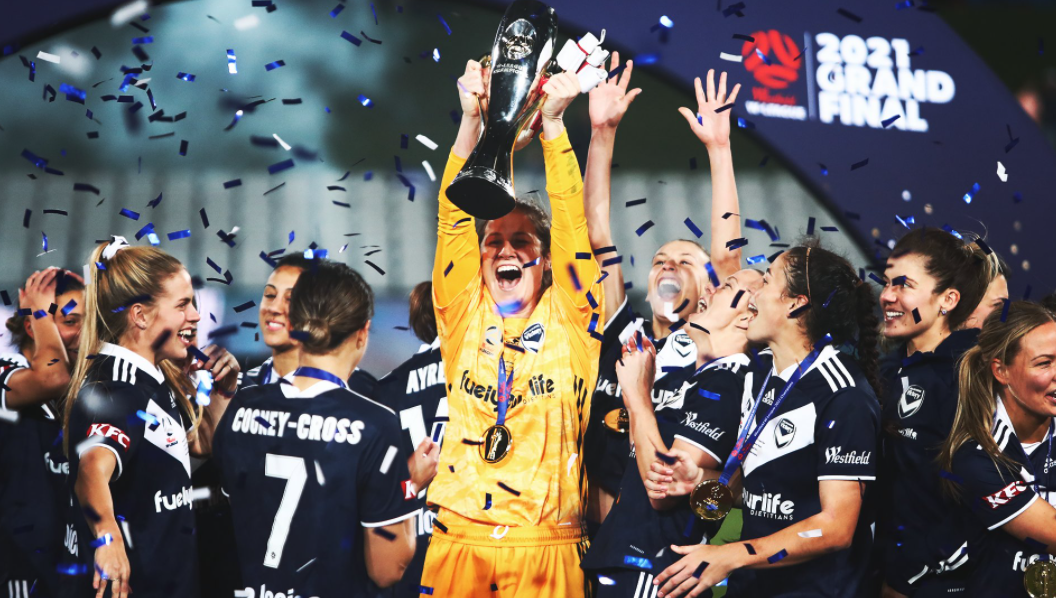 Premiership winners Sydney FC and regular season third place side Melbourne Victory entered the Grand Final on April 11, in Sydney after scoring a combined 51 goals in the regular season and nine in the semifinals last week, but it was a single goal from Kyra Cooney-Cross deep in the second overtime session that gave Melbourne Victory a 1-0 win and their second ever Grand Final win in 13 W-League seasons.

The game attracted 4,619 fans in Sydney, the second highest attendance total of the season after Adelaide United’s 5,159 in Round 13 to see their 3-1 win over Western Sydney Wanderers. Cooney-Cross took a corner kick in the 120th minute which sailed in front of the goal and Sydney FC goalkeeper Jada Whyman didn’t jump high enough, tipping the ball backwards and into her net, despite three Sydney defenders around her trying to block it as well.

It was the first ever W-League Grand Final to be decided in overtime and after Cooney-Cross’s late goal, the Victory had to see out four injury time minutes for the win, in a game that was looking like it would have to be decided by penalty kicks.

The Smiling Assassin speaks! @kyracooneyx speaks after her game-winning goal!

The Victory had the edge in possession over Sydney FC (52% vs. 48%) and corners (9 vs. 7) but had a huge advantage in shots (30 vs. 14), with shots on goal being similar (6 vs. 4). Cooney-Cross (19) was a difference-maker all game, finishing with nine crosses (second to Victory captain and wingback Angie Beard’s 15) and tied with New Zealand international Annalie Longo with seven shots.

ABSOLUTE SCENES AS @kyracooneyx WINS IT AT THE DEATH FOR @victorywleague

Cooney-Cross also had a shot strike the crossbar in the 12th minute and then lifted a cross to Lisa De Vanna, who also hit the crossbar just before half time. In the second half, Cooney-Cross was denied twice in the 83rd minute from Jada Whyman’s double save close to the goal line, with the Sydney keeper even getting stuck in her own net after the first stop.

The loss of forward Princess Ibini on the hour mark to injury blunted Sydney’s attack, though substitute Allira Toby fired an excellent right-footed shot narrowly over Garton’s goal with ten minutes left in the second half.

We're still recovering from a classic!

After the game, De Vanna said, “I actually feel like I’ve actually grown as a person and a player, playing for Victory this year. It was definitely a different role, I had to lead and teach [the young players] about what it takes to be the best, and what it takes to be a Matilda at that level. Every game, every week, every day was a challenge. Look at the rewards. This is a true reflection of what we have achieved by having a good culture and believing in yourself. This is probably one of the most—out of my whole career—exciting feelings that I have ever experienced, because you learn from everything you achieved from the process.”

Adelaide United defender Charlotte Grant has joined top Swedish Damallsvenskan side FC Rosengard (formerly Malmo), which has won the league title 11 times, the last time coming in 2019. Grant (19) has been with Adelaide for three seasons and played 24 games in the league.

She said, “The opportunity to play overseas has always been a personal goal of mine and to see that now come to fruition reflects the dedication and work I’ve put in so far in my career, as well as learning from some of the amazing coaches.” Grant is expected to play again with Adelaide next winter in the W-League, which largely dovetails nicely with the Swedish League’s offseason.

Matilda defender Emma Checker (25) has joined Selfoss of Iceland for their 2021 season this summer after playing with Melbourne City this weekend. She also was part of the Matilda squad that had high profile friendlies with Germany and the Netherlands during this current FIFA international break, along with three W-League players from the 2020-21 season who are all now based in Sweden for the 2021 season: Dylan Holmes (Hacken from Adelaide), Emily Gielnik and Clare Polkinghorne (both Vittsjo from Brisbane).

Before joining City, she played only one game with FC Fleury 91 in France last fall due to a stress factor, after signing a two year contract. She previously played in the Korea Republic with Incheon Hyundai Steel Red Angels.

Did Tierna Davidson help her Olympic prospects against Sweden?
Why France’s front line could pose problems for USWNT