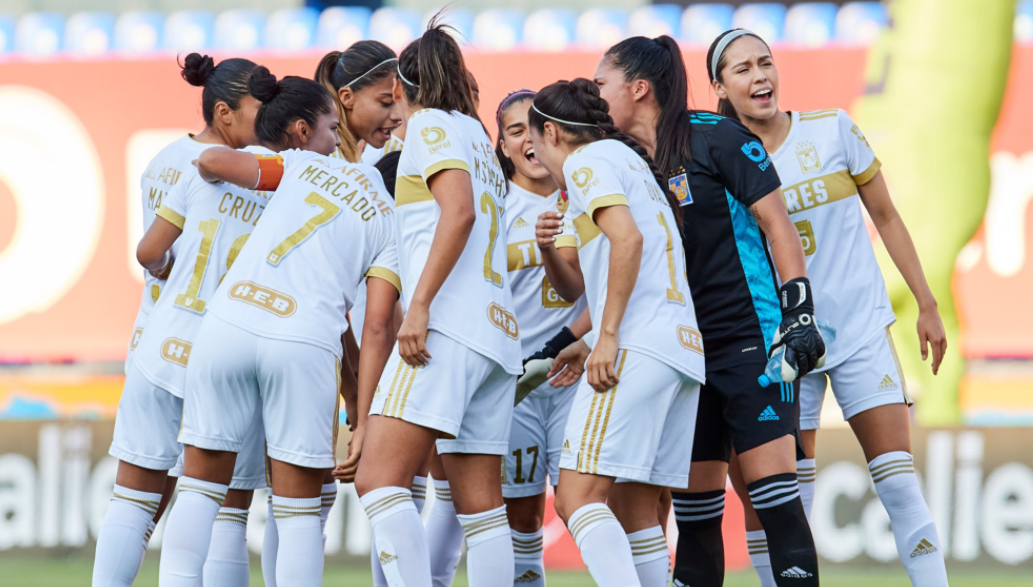 The 14th week of Clausura competition in Liga MX Femenil has come to a close. With only three more competitions left for each side, the top eight spots — which qualify for the playoffs — are being eyed. Some teams are a lock for the playoffs, like first-place Tigres, who extended their lead at the top.

Here’s a breakdown of what happened in Mexico this past weekend, and some international news as well.

Chivas is eyeing the top spot in Liga MX Femenil. It’s a tall mountain to climb against the incredibly consistent Tigres, but a 4-1 victory over Pumas certainly helped. Now, Chivas is within three points of the top spot and Tigres.

To the shock of Liga MX Femenil fans, Pumas held goal-scoring wonder Alicia Cervantes to only one goal. She struck first, with all goals coming in the second half, at the 52nd minute on a header inside the box. In the 65th minute, Chivas struck again, courtesy of Joseline Montoya, who picked up a loose ball at the top of the box and slotted it past Pumas goalkeeper Melany Villeda.

Pumas did cut the lead in half two minutes later, as Marlyn Campa went for goal and the ball deflected off Chivas goalkeeper Blanca Felix and bounced into goal. However, Chivas extended their lead in the 76th minute, courtesy of Diana Rodriguez.

Trouble occurred for Pumas and spoiled any hope of a comeback in the 84th minute. Goalkeeper Villeda leapt in the air to stop a long-range shot, but had the ball bounce off her back and into goal, after originally hitting the crossbar. It counted as an own goal against Villeda.

Pumas had a small drop on the table to fifth place, but still sit in a comfortable position in the hopes of making the playoffs. Another win or two won’t hurt for Pumas, though.

Puebla might be sitting in last place on the Liga MX Femenil table, but they gave Monterrey a run for their money on Easter Sunday night. Puebla put up two second-half goals to give Monterrey a scare. However, fourth-place Monterrey was able to hold off any equalizing chance.

Monterrey scored all three of their goals in the first half. Dania Perez began the scoring in the 17th minute, hitting a chip shot from about 30-yards out. Christina Burkenroad scored the last two goals within five minutes of each other, in the 34th and 39th minutes.

Burkenroad’s first goal came off a strike inside the box with her foot, while her second goal occurred a little closer to goal, as she edged out her defender one-on-one inside the box.

Puebla began to mount their comeback in the 69th minute, as Ibeth Lopez scored when she ran, unmarked, inside the penalty area. In the 93rd minute, deep into stoppage time, Maria Lopez found the back of the net on a header off a corner kick. However, the referee only gave three minutes of stoppage time, so Puebla couldn’t mount another chance.

It was a stirring effort from Puebla, but Monterrey latched onto three points and now sit in fourth place.

There is really no stopping Tigres. The club is currently on an outstanding 12-game unbeaten streak. The team’s only loss of the Clausura campaign came on January 16 against Atlas, way back in Week 2 of competition.

Tigres will now attempt to start a winning streak. Last week, the club drew with Monterrey. This week, Tigres put on a three-goal wallop of Cruz Azul at home. Captain Stephany Mayor got Tigres off to a red-hot start after scoring only 28 seconds into the match. Mayor picked up a deflection inside the box and put it past Cruz Azul goalkeeper Karla Morales.

Mayor’s tally was the lone goal of the first half. Early in the second half, in the 49th minute, Nancy Antonio scored at the top of the box, picking up a poor Cruz Azul clearance which she settled and then hit with her left foot.

In the 86th minute, Blanca Solis picked up an insurance goal and confirmed the three points for Tigres, who sit in the top spot. Solis found herself open near the far post and headed the ball past Morales.

Cruz Azul sits in eighth place, the final playoff position. However, Cruz Azul doesn’t have a big lead to hold on to that spot. Club America is breathing down the neck of Cruz Azul with only a two-point difference.

If there’s one word to describe what this Clausura has been like for Tijuana this year, it would be “rollercoaster.” Tijuana started off slow, picked up the pace in the middle and now are riding a four-game losing streak. Despite the losses, Tijuana still has a chance for a playoff spot — although the odds are quite slim. Tijuana would have to win all three of their final matches and wait on some results, too.

Pachuca, on the other hand, have slowly climbed up the Liga MX Femenil table. The team sits in sixth place, and has quietly been picking up victories and featuring in draws.

Monica Ocampo struck first in the 34th minute, after Esbeydi Salazar pick-pocketed Tijuana’s defense and stole the ball. Ocampo ran to an open spot and hit the ball past Itzel Gonzalez. However, the lead didn’t last long, as Renae Cuellar continued her goal-scoring rampage with a curved strike in the 42nd minute.

Salazar made the difference in the second half, though. In the 67th minute, Salazar scored the game-winning goal for Pachuca, picking up three points and putting the team in sixth place.

Mónica Vergara has made an impact for the Mexican women’s national team in her short time at the helm. Earlier this year, Mexico took on Costa Rica in two friendlies, and recorded one win and one draw. Now, the Mexican women are heading to Europe for a slew of international friendlies during the upcoming break.

Mexico will take on Slovakia on Saturday, April 10, in Vienna, Austria. Then, three short days later, the team will travel to Marbella, Spain, to take on La Roja.

The following are the players called up by Vergara for the trip.

*Matches will be held after the international break.