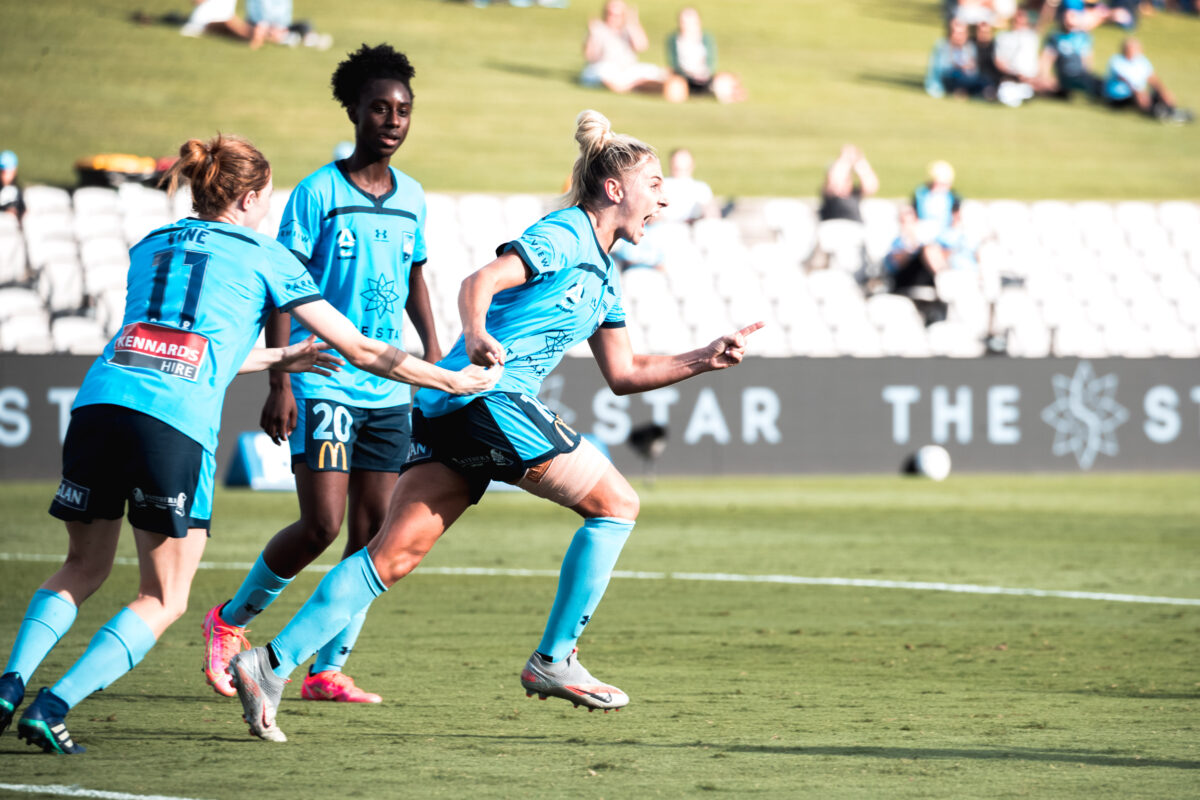 Sydney FC captured their third Premiership title and first since 2010-11 after defeating Melbourne Victory 2-1 at home on March 31 in front of 1,111 appreciative fans. Captain Teresa Polias scored her first goal of the season in the 29th minute on a well-placed free kick from the edge of the penalty area into the top corner of the net past Melbourne keeper Gaby Garton.

In the second half, Princess Ibini scored her fifth goal of the season from the penalty spot in the 73rd minute after her fellow attacker Remy Siemsen was fouled in the box. Kyra Cooney-Cross scored a lone reply for Melbourne late in injury time from a brilliant curling shot past Sydney goalkeeper Jada Whyman after dribbling into the penalty area.

The semifinal matchups were set after the game for Easter weekend as first place Sydney hosted Canberra United on April 5; the two teams tied in Canberra last week, with the shared points clinching the playoff berth for the Greens over Adelaide United on goal difference. Sydney won the other regular season match between the two sides 2-0 in February. Brisbane Roar, as the second place finisher, was home against Melbourne Victory on April 4; Brisbane smashed MV 6-0 at home on Jan. 22, after a scoreless tie earlier in the season.

The regular season is done and dusted and @SydneyFC are the Premiers!

Melbourne Victory surprised a Brisbane Roar home crowd of just under 2,000 fans in wet, rainy conditions by soundly defeating the Queensland side 6-2 on April 4. Lisa De Vanna, who played with four NWSL sides during the first four years of the league as well as with clubs in its predecessor league WPS, scored one goal in each half to lead Melbourne, including the first goal of the game in the 23rd minute.

De Vanna doubled her regular season scoring output with the brace. New Zealand international Olivia Chance, who played at the University of South Florida, in the WSL with Everton and Bristol City and was on the 2019 Women’s World Cup team, briefly tied the game with a wonderful long range blast in the 43rd minute, but American Cat Zimmerman restored the Melbourne lead just before halftime.

De Vanna added her second when she stripped Tameka Yallop of the ball near the top of the penalty box and fired a shot towards the near post. Melina Ayers then scored a second half hat-trick, even missing a penalty-kick by blasting the ball over the crossbar. Tameka Yallop scored the Roar’s second goal but Brisbane could not stop the Victory’s late onslaught. Early in the game, Yallop looked to have scored on a shot that bounced off the crossbar behind Garton but a goal was not given. Mariel Hecher had a late goal that was disallowed for offside and Roar head coach Jake Goodship was diplomatic after the game, but definitely felt that his side was severely disadvantaged by a number of questionable refereeing decisions.

The Roar led in possession compared with Melbourne (58% vs. 42%), which has been typical for Brisbane this season, but Melbourne had the attacking advantage in shots (24 vs. 16) and shots on goal (11 vs. 3). For Melbourne Victory, they came through a difficult patch of 3 games in 9 games — including the delayed final regular season game against Sydney FC — with two wins, scoring 6 goals in each. With their offensive firepower and Argentinian international Gaby Garton in goal, they will be a tough team to face in the Grand Final, particularly as they now have a week to rest.

The 2020-21 W-League Premiership title winners Sydney FC defeated Canberra United 3-0 on April 5 in front of 2,044 fans at Jubilee Stadium in Sydney to advance to their eighth Grand Final in 13 W-League seasons. Former Australian U-20 international Clare Wheeler, who played seven previous seasons at the Newcastle Jets before joining Sydney FC this season, was a difference maker in the game.

First, she sent a long cross-field pass to Mackenzie Hawksby, who was alone in front of goal on the back post; Hawksby headed the ball into the net for her third goal of the season and the ultimate game-winning goal. Wheeler then scored in the 64th minute before defender Ally Green scored a blistering long range shot after taking the ball off of a Canberra defender near midfield. In was Green’s first goal in 31 W-League games across three seasons for the club.

In next week’s Grand Final, Sydney FC will attempt to tie Melbourne FC with four Grand Final wins, while their Big Blue rival Melbourne Victory will attempt to win their second title (2013-14) in their third visit to the Championship game. The only game between the two clubs this season was the Round 13 make-up game (see above) won by Sydney 2-1.

Brisbane signed former Australian U-17 and U-20 international Sunny Franco (23), who had two goals this season with Newcastle Jets, as playoff support since centerback Clare Polkinghorne and league leading scorer Emily Gielnik recently left to join Vittsjo ahead of the new Swedish Damallsvenskan season. Franco previously played for the Roar in the 2013-14 and 2014 seasons and then on a second occasion in 2016-17; she has also spent a season with Sydney FC and the Wanderers. Note: Franco played 73 minutes in the Roar’s 6-2 semifinal defeat to Melbourne Victory.

Newcastle Jets forward Sunny Franco (in white) earlier in the 2020-21 season against the Brisbane Roar, who she joined for the playoffs. Photo Courtesy of the Westfield W-League.