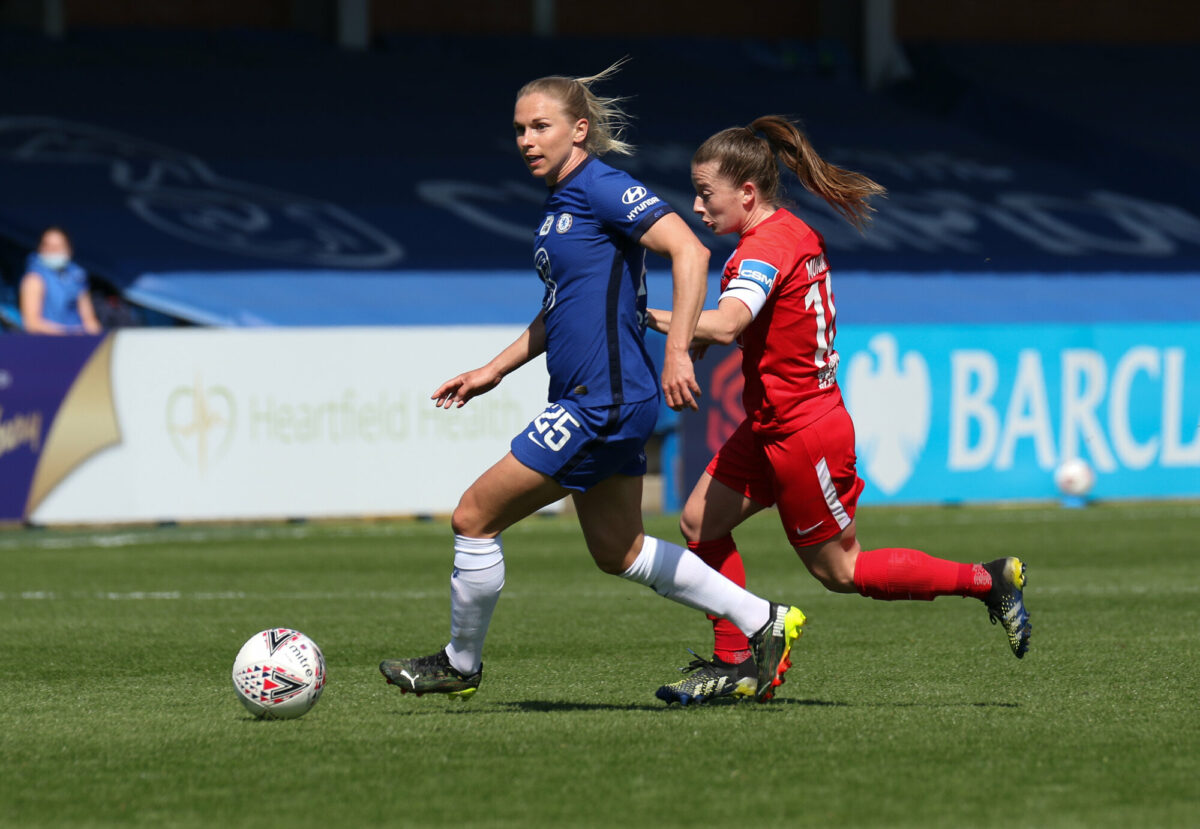 This weekend in the FA Women’s Super League, Manchester United faltered in their quest for the Champions League, while the other big three – Chelsea, Manchester City, and Arsenal – cruised to wins.

Meanwhile, Birmingham City’s players took action this weekend regarding poor working conditions at the club. Read on for all the news and highlights from the weekend:

The #BarclaysFAWSL standings going into the international break ✈️ pic.twitter.com/uNaB4qGGDb

United made a big misstep on Sunday, as they suffered a 1-0 loss to Brighton, effectively derailing their hunt for third place. Now, if they want to grab third – and the last Champions League spot – United need Arsenal to falter twice in their four remaining games.

After a lopsided defeat last week to Everton, Brighton’s showing was far better this weekend. In the first half, Brighton’s attacking pressure paid off, as a floated in free kick was handled in the box by United’s Maria Thorisdottir, and a penalty kick was awarded. Inessa Kaagman stepped up and slotted home the penalty for the Seagulls.

Christen Press was not available for the match, as she was carrying a small knock. As for Tobin Heath, who has been out since January with an ankle injury, United coach Casey Stoney could not provide an updated timeframe for her return.

Sam Kerr’s first half hat trick, a brace from Fran Kirby, and a goal from Guro Reiten set Chelsea up for a 6-0 win on Sunday over Birmingham.

Kerr’s second, slotted in from an impossibly tight angle, is worth the watch:

As for Birmingham, issues came to light this weekend when every player at the club signed and sent a letter to the club’s board discussing poor working conditions. Outlined in a story by The Telegraph’s Tom Garry, the players’ concerns include that they have poor access to adequate training, changing and medical facilities, unfair travel arrangements, and budget concerns, including that the club was unwilling to pay a small fee to change the location of their match against Aston Villa in February. This resulted in the postponement of the match due to a frozen pitch.

The issue is summed up well in the clip below by Good Morning Britain producer and football reporter Shebahn Aherne, who is also the twin sister of Irish international and Birmingham forward Ruesha Littlejohn:

The women’s game has come a long way… then you hear what’s happening within the @BCFCwomen camp. Hopefully the board can back their players so we can see them in @BarclaysFAWSL next season. #Womensfootball #FAWSL pic.twitter.com/MI6kSIqeij

A brace by Vivianne Miedema, and goals from Danielle van de Donk and Beth Mead secured the 4-0 win for Arsenal over Bristol on Sunday.

Arsenal fans will be happy to note that Leah Williamson returned from injury on Sunday, as she came on as a second half substitute. The first choice centre back missed Arsenal’s previous two matches.

It was also announced last week that Arsenal coach Joe Montemurro has decided to leave the club at the end of the season. Montemurro lead the Gunners for the last four years – most notably to a WSL title in 2019 – but his side failed to qualify for the current Champions League campaign last season. Arsenal’s news release noted, “Joe has decided to take a professional break to recharge and dedicate more time to spending with his family.” The search for a replacement is underway.

Goals from Janine Beckie and Caroline Weir, as well as an own goal by Tottenham keeper Rebecca Spencer, earned City the three points over Spurs on Sunday. Abby Dahlkemper started and played the full 90, while Sam Mewis started and was substituted out in the second half. Rose Lavelle was subbed on in the 63rd minute.

The win got City back on track after being knocked out of the Champions League quarterfinals last Wednesday. Although City defeated Barcelona 2-1, it wasn’t enough to come back from a 3-0 loss in leg 1 the week prior.

Once the international break is up, all eyes will be on a decisive clash on April 25th between City and Chelsea, which could very well decide which team will hoist the WSL trophy this year.

Everton followed up last week’s strong performance over Brighton with a win over Aston Villa on Sunday. Goals by Lucy Graham, Izzy Christiansen, and Simone Magill secured the three points for the Toffees.

Chloe Arthur managed to pull a goal back for Villa in stoppage time.

Five goals in the first half – including a hat trick from Marta Thomas – earned West Ham a much needed win on Saturday. The win pulled the Hammers out from last place, and they now sit two points above Aston Villa, who occupy the relegation spot.

What a way to cap off a first-half hat-trick, @mart__thomas! 🤩

Meanwhile, Saturday was Jess Fishlock’s last match with Reading, as her loan has come to an end. She will return to OL Reign once the current international break concludes.