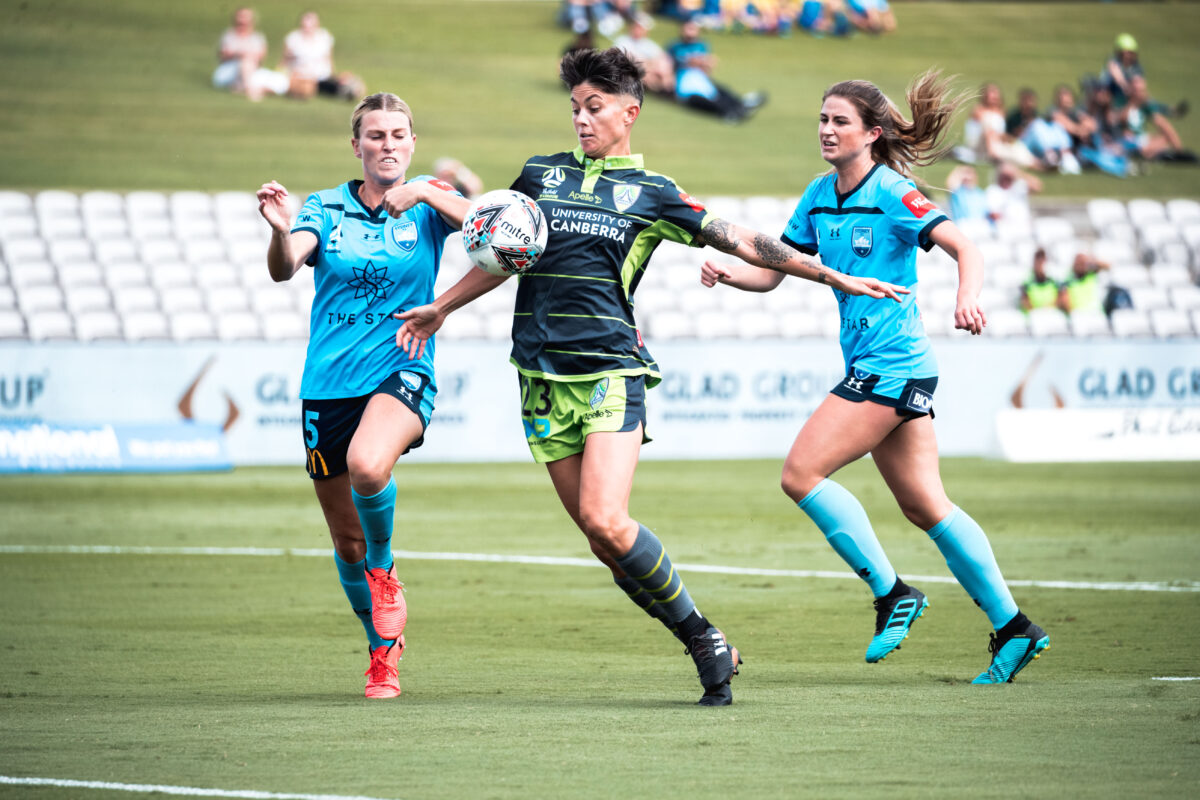 On March 25, Melbourne City won their third consecutive game and second straight over Perth with a narrow 2-1 home win over the Glory in front of 454 fans. Late goals by Rhali Dobson (63’) and Alex Chidiac (79’) were the difference. Dobson scored her second goal in two games, with both of her 2020-21 season goals coming against Perth.

Dobson’s tally came from a brilliant back heal from defender Tori Tumeth, who had the ball near the edge of the box after a corner; her ingenuity saw the ball ending up at Dobson’s feet a few yards in front of the net, where she easily buried it. Dobson, who has been capped once at the full national team level, is retiring at age 28 to care for her boyfriend, who has brain cancer. After the game, he proposed to her on the pitch in an emotional moment for her [she said yes] and her teammates, who only learned about her retirement plans a day before.

She finishes with 109 W-League games and 14 goals along with two W-League Grand Final wins while at City. She told FOX Sports after the match that, “I thought I was going to be a train wreck [knowing it was her last game]. I’m all smiles. We’ve finished the season on a high. It was a great team performance… For me it’s a nice way to finish my season and what better club to finish with than Melbourne City.”

Alex Chidiac scored her third goal to finish as the club’s leading scorer in her first season at City. Patricia (Patty) Charalambous (26), who has played in Cyprus for Apollon, replied for Perth in the fifth minute of second half injury time. Charalambous is in her fourth W-League season and her late consolation goal was her first in the league after transferring back to Perth following the 2019-20, when she played with Canberra United. Her father Nearchos played for APEOL Nicosia in Cyprus.

Canberra United and leaders Sydney FC played to a 0-0 tie on March 26 at Viking Park in Canberra in front of 1,411 happy fans, as with the point Canberra clinched a 2020-21 playoff berth in their last game of the season. Head coach Vicki Linton has led the side to the playoff promised-land for the first time since the 2016-17 season, when they won the Premiership (regular season title) but lost in the semifinals. The Greens ended the season with an identical 22 points to Adelaide United but had the slimmest of advantages in goal differential (+5 to +4).

Note: In Adelaide United’s record season of 2020/21, their 22 points would have given them a semifinal spot in each of the past six seasons; in some cases a team qualified with as few as 16 points from 12 games.

During the deadlocked match, only the third of the season and first since Round 2, the two sides were even for ball possession (51% vs. 49%) but Canberra led in shots (14 vs. 7) and shots on goal (7 vs. 1). Michelle Heyman (5) and Grace Maher (4) led the Greens in shots, with Heyman coming close to scoring on a few occasions, with one shot hitting the bottom of a goal post.

Melbourne Victory stormed into the playoffs with a 6-0 home win over Perth Glory on March 28, with a first half brace from Melina Ayers, a second half brace from Kyra Cooney-Cross and single goals by New Zealand international Claudia Bunge and American Cat Zimmerman, who missed a few games this season thru injury. Cooney-Cross now has six goals on the season with one postponed regular season game to make-up later this week, while Ayers and Zimmerman have five goals each and Bunge scored her second in her first W-League season. Cooney-Cross’s second goal saw her break into the Glory half of the field, take a long past and charge towards goal, firing the ball high into the far side of the goal after being unchallenged.

Nothing stopping Catherine Zimmerman from finishing off this deflection! 🤩

It was the second time that Melbourne Victory scored six goals in a match, after their first derby against Melbourne City early in the season, with half of their 24 goals this season coming in those two games.

We could all do with some uplifting content, so how about another look at @kaitlyn_torpey's first ever @WLeague goal? ☺️

Gielnik tied the W-League record for most goals in the regular season with 13, even with fellow Matilda forward Sam Kerr (now with Chelsea in England), who had 13 for Perth in both the 2017-18 and 2018-19 campaigns. In goal for Newcastle, Clare Coelho was outstanding, denying Gielnik twice in the first half with diving saves and finishing with nine saves. Gielnik’s Roar teammate Isobel Dalton finished first in the league in assists with seven, pending the results of the last makeup game next week, as Sydney FC’s Teresa Polias currently is second with six assists.

With the win, the Roar is now joint even with Sydney FC at the top of the table, with a better goal differential than the New South Wales side (+3). Brisbane finished the regular season with the fewest number of losses in the league (one) and tied with Canberra with the most ties (four).

There is one last game to complete in the W-League and it will be held on March 31 when Melbourne Victory travels to Sydney FC, to play a game that was postponed from March 20 due to a water-saturated field. A Sydney FC win or tie will give them the Premiership title and top seed in the semifinals on the weekend while guaranteeing Brisbane Roar second place and a home match next weekend. A Melbourne Victory win will see them as champions, with the Roar hosting Sydney FC in the playoffs. It will be interesting to see the starting lineups that both sides go with in this match, having played a few days before and with an important playoff game to prepare for on Easter Sunday or the day after (see below).

Melbourne Victory was rampant as they crushed Perth Glory 6-0 in Round 14. In addition to her two goals, she had one assist from four chances created, a game leading four shots and 11 crosses; she also won two-thirds of her 12 duels and intercepted 2 Glory passes. She was a dynamo in a win that saw Victory move from outside of the playoff picture into third and with a chance to still capture their second ever Premiership title (after 2018-19).

Honorable mention goes to Rylie Dobson of Melbourne City, who has retired from the game with a goal in her last game, a win, and an engagement ring after an emotional scene following the final whistle.

Last week we reported that Brisbane Roar center back Clare Polkinghorne was joining Swedish Damallsvenskan club Vittsjo in Sweden for the 2021 season and would miss the playoffs. In an expected announcement, Roar forward Emily Gielnik will also miss the playoffs as she returns to Vittsjo for her second season. Swedish clubs tend to sign new players to a year contract with a mutual option for a second season, which Gielnik has taken up. Gielnik has 12 goals this season in 12 games with the Roar to capture the 2020/21 season Golden Boot award, after scoring 8 goals in 16 games with Vittsjo in 2020.

We know the four. So tell us, who wins the Westfield #WLeague championship?#GetItAll #AsOne #WomensFootball pic.twitter.com/SQu0JTFzAR