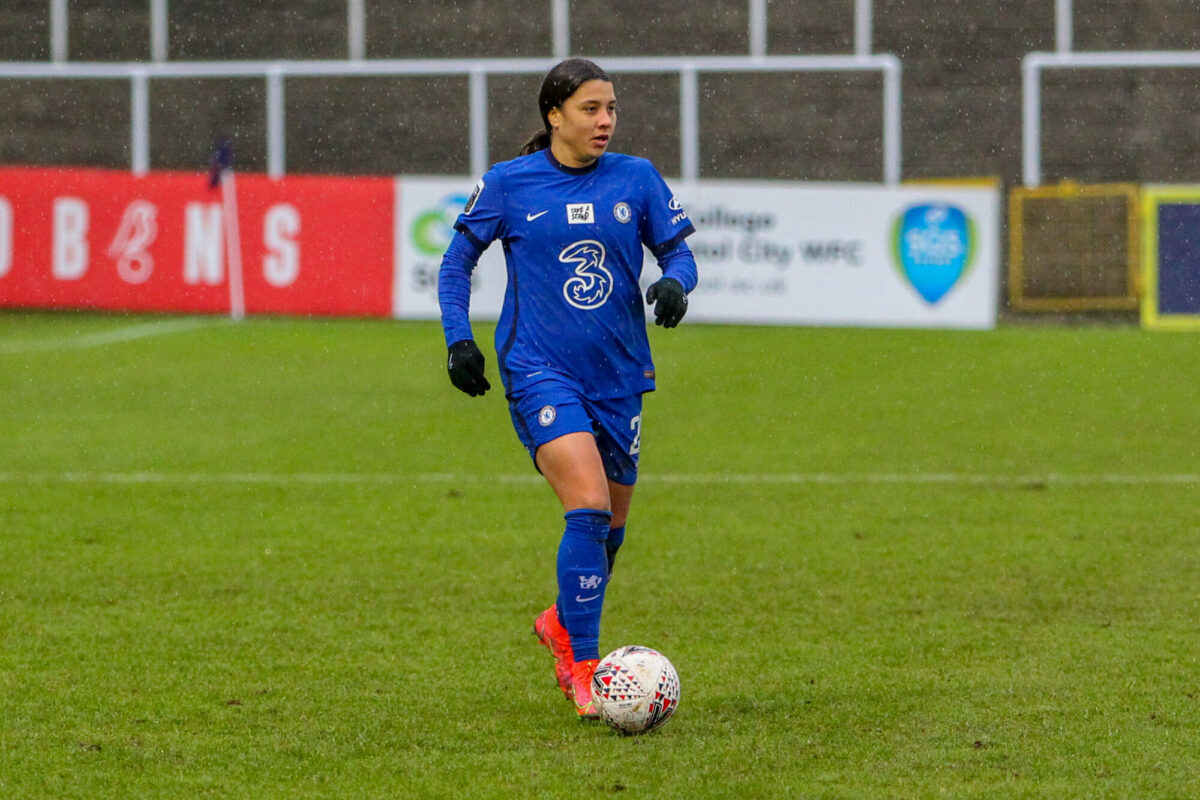 The FA Women’s Super League was low on surprises this past weekend, as the top five sides all were victorious – though City waited until the dying moments to secure their win.

Arsenal used their momentum from last week’s big win over Manchester United to secure a win over Spurs on Saturday, while United got back on track with a historic win at Old Trafford. Meanwhile, the dynamic Chelsea duo of Fran Kirby and Sam Kerr once again impressed at Kingsmeadow.

Read on for all the league news from last week!

📊 Here is how the league table looks after a busy weekend!#BarclaysFAWSL pic.twitter.com/FpYwqjBG17

On Saturday, Arsenal cruised to a 3-0 win over Spurs at Tottenham Hotspur Stadium. This edition of the North London Derby was decided by goals from Caitlin Foord, Vivianne Miedema, and Katie McCabe.

Foord opened the scoring in the 26th minute, when she played a one-two with Noelle Maritz, and then buried her shot in the bottom corner. Miedema added a second before the second half break, with a beautiful bit of skill. McCabe whipped a corner kick near the penalty spot, and the Dutch striker volleyed it first-time past Spurs keeper Becky Spencer:

Vivianne Miedema makes it 2-0 with this unreal volley! 😱🤯 #NorthLondonDerby pic.twitter.com/rlnPmGQOVm

McCabe added the third herself in the second half, when she took advantage of a Spurs giveaway, dribbled her way into the penalty area, and buried her shot.

Spurs did have a number of chances in the second half, when some defensive lapses by Arsenal let them into the match. Arsenal keeper Manuela Zinsberger made an incredible triple save late in the second half to preserve the clean sheet.

Manchester City bounced back from a poor showing midweek in the Champions League (a 3-0 loss to Barcelona) with a win on Saturday against Reading. But it wasn’t easy – an organized Reading side snuffed out chance after chance for City, and it looked like the match was headed for a draw.

But after keeping up the pressure throughout the second half, City were bailed out in the 87th minute with a moment of brilliance by Lauren Hemp. Hemp received the ball in the attacking third, and dribbled through no less than four Reading defenders before delivering a low cross into Chloe Kelly in the six-yard box for the tap in finish. You have to see this one:

Lauren Hemp ➡️ Chloe Kelly and the deadlock is broken!

City up 1-0 over Reading with just minutes to spare… pic.twitter.com/yjRCKyUZ7E

As for City’s American players, Rose Lavelle started and had a great chance in the 6th minute, when the ball landed to her on the penalty spot. Her powerful shot was saved by Reading keeper Grace Moloney. Lavelle was substituted in the 62nd minute for Sam Mewis. Abby Dahlkemper started and played the full 90 for City.

Second-half goals from Lauren James and Christen Press sealed Manchester United’s win over West Ham on Saturday. It was a historic win for the Red Devils, as the match was the first ever for the women’s team at famed Old Trafford.

While the first half was marked by a dearth of opportunities for both sides, Manchester United came out quickly in the second. In the 49th minute, the ball pinged around in West Ham’s box after a corner, and James managed to redirect the ball with her head past keeper Courtney Brosnan.

And just minutes later, Press doubled the lead. Jackie Groenen made a great run, weaving through West Ham’s defenders, and played a perfect ball through to Press, whose finish was clinical:

On Sunday, Fran Kirby and Sam Kerr showed off their special partnership again, as Kirby assisted Kerr on both of Chelsea’s goals in a 2-0 win over Aston Villa.

Kirby to Kerr again!! Chelsea up 2-0 over Villa now.

Kerr is now second on this season’s top scorers list, with 14 goals to Miedema’s 15. Kirby has set up six of those goals for Kerr, while Kerr herself has set up four for Kirby.

Last week, The Equalizer’s Blair Newman wrote about Chelsea’s unrivaled counterattack, of which Kirby and Kerr are integral parts.

A dominant performance by Everton and goals from Izzy Christiansen, Simone Magill and a hat-trick from Hayley Raso sealed the three points on Sunday for the Toffees over Brighton.

With just over a month left this season, Everton will play both Manchester United and Arsenal – both teams desperate to win their remaining games and snag the last Champions League spot. Can Everton play spoiler to either? With a performance like Sunday’s, it’s possible.

Birmingham and Bristol played to a 1-1 draw on Sunday to keep things tight near the bottom of the WSL table.

Bristol struck first in the 13th minute, when a shot by Carla Humphrey was blocked, and Charlie Wellings was in the perfect position to volley home the rebound. Ebony Salmon almost doubled Bristol’s lead after the halftime break when she attacked the Birmingham goal with speed, but her shot agonizingly crossed the goal area and was just wide.

Later, Birmingham got their equalizer. They won a corner kick after a nice bit of pressure in Bristol’s attacking third, and the ball landed to Christie Murray at the top of the box, who buried her shot through traffic.

Randy Waldrum is back on the international stage, with big plans for Nigeria
W-League Review: Final four set for W-League Semifinals