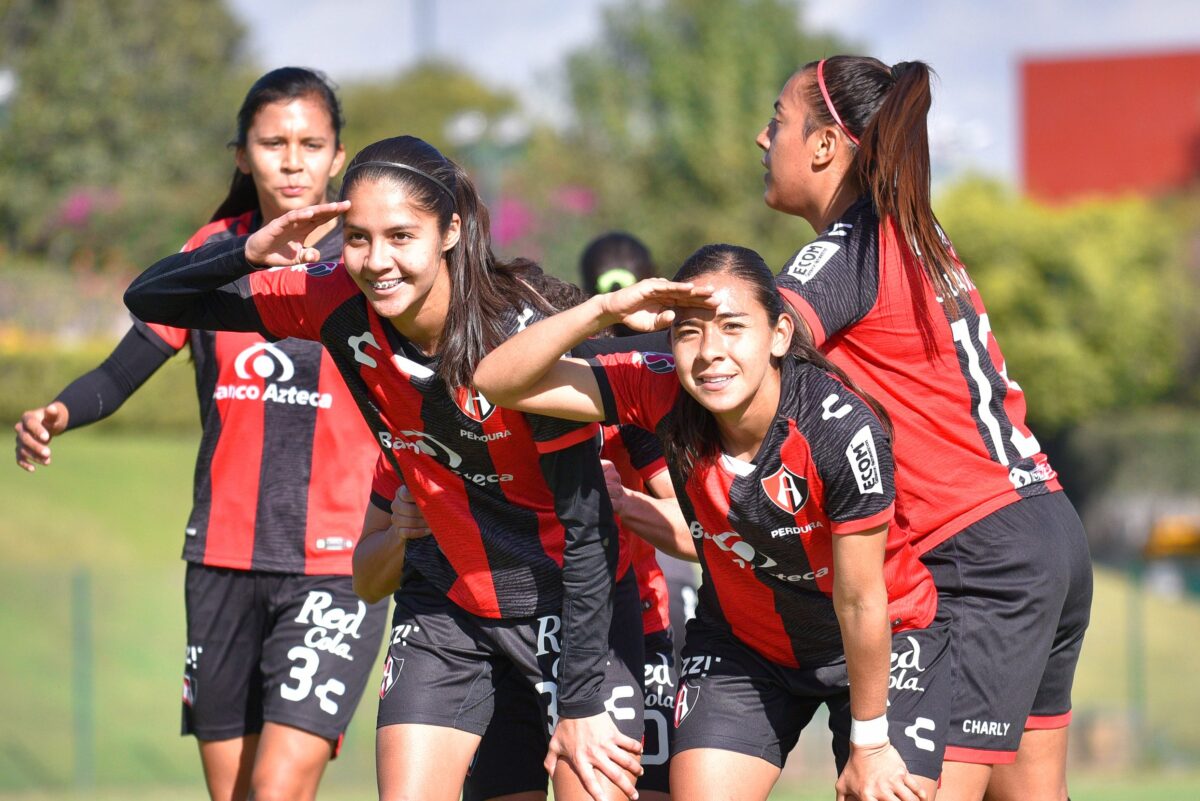 The weeks of the Liga MX Femenil Clausura campaign are winding down. Tigres is on top of the table, but Atlas, with a win this past week over Querétaro, is closing the gap and eyeing down the top spot.

Alison Gonzalez continues to make her name known in Mexico. She might not be leading the league in scoring anymore — Alicia Cervantes of Chivas has that honor for the time being with 13 goals, compared to Gonazalez’ 12 goals — but she isn’t slowing down in front of net. Gonzalez scored the lone goal, and the game-winner, against Querétaro on March 19.

Starting way in the back from goalkeeper Ana Paz, Atlas sent the ball up quick on a counter attack. A bouncing soccer ball came toward Gonzalez, who hit it on the volley and chipped it past Querétaro goalkeeper Diana Garcia.

Gonzalez and Atlas are two points behind first-place Tigres. While the powerhouse club is still compiling wins, Atlas is also gaining their fair-share of victories. Atlas and Tigres met early in the Clausura campaign, with Atlas taking the 2-1 victory.

"The 10 best wonderkids in women's football"

Tigres isn’t going to let Atlas just easily catch up on them, though. Tigres added another three points at home against last-place FC Juárez. Vania Villalobos recorded the clean sheet for Tigres, certainly giving them a push in the goal differential category.

While FC Juárez did find the net first, it wasn’t to the visitor’s benefit. Miah Zuazua, off a corner kick, gave Tigres the opening tally with an own goal past her teammate Gabriela Herrera. As custom for Tigres this season, the final two goals came late in the match. Maria Elizondo scored off a volley inside the penalty area in the 90th minute, while Belen Cruz tallied the third and final goal two minutes later off a strike from about 25 yards out.

Tigres has Atlas breathing down their neck for the top spot, but the Apertura champions are remaining calm and cool with adding more goals to their scoresheet.

Cruz Azul continues to sneak through the Liga MX Femenil table and has moved up to sixth place following a three-goal victory at home against Mazatlán.

Alejandra Curiel and Rebeca Villuendas scored in the first half, while Paola Gonzalez kicked off the second half with an early goal. Curiel scored off a penalty kick, despite goalkeeper Mariana Zarraga diving the correct way. Villuendas picked up a miscue from the defense and chipped the ball over the back four and Zarraga.

Gonzalez finished things off with a tap-in on a corner kick. Zarraga leapt up and saw the ball slip through her hands and land right at the foot of Gonzalez.

Cruz Azul might not have a realistic push for first place, but a finish in the top three isn’t out of the cards. Meanwhile, Mazatlán dropped down to 10th place following the road loss.

A hat-trick for Alicia Cervantes put her ahead of Atlas’ Alison Gonzalez for the league-leading goal scorer. Cervantes scored twice times in the first half — with her first two goals only being two minutes apart from each other — and once late in the 83rd minute. No other Chivas player is in the top six for goal-scoring this Liga MX Femenil season.

Her first goal forced Puebla goalkeeper Siena Ruelas to come off her line to chase the ball, but Cervantes slotted it past her. Two minutes later, Cervantes picked up the rebound from Joseline Montoya’s shot for a simple tap-in goal.

Finally, Cervantes sealed her hat-trick in the 83rd minute on another tap-in. Initially, Cervantes tried the header off a cross from Angelica Torres, who entered the match as a substitute, but the cross was too low for the header.

Chivas currently sits in fourth place and has a player who is showing no signs of giving up her top spot on the league’s goal scoring list. However, Chivas needs to bring in some reinforcements this weekend when facing a tough Club América group.

Monterrey remains in third place on the Liga MX Femenil table after picking up three big points against Tijuana on the road. Tijuana faltered and are now riding a two-game losing streak after dropping three points at home last week against Santos Laguna.

Daniela Solis recorded the brace for Monterrey, and currently sits at third on the league’s scoring leaderboard with nine goals. Right  behind her is teammate Aylin Avilez, who has eight goals this season.

Both of Solis’ goals came in the first half, one at the beginning and one toward the end. In the 4th minute, Solis,  toward the top of the penalty area, found herself wide open and sent her shot past goalkeeper Itzel Gonzalez. In the 41st minute, Solis, from almost the exact same spot, decided to chip Gonzalez for her brace.

Monterrey has been inconsistent during the Clausura campaign, but are now riding a three-game winning streak to help keep their spot in third — and potentially look to move up the table. Tijuana, on the other hand, has slipped to 11th place.

*Due to international competitions, TUDN will not be airing Liga MX Femenil matches during Week 13.

Scouting Maya Le Tissier, the English teen who aims to better than Lucy Bronze
Randy Waldrum is back on the international stage, with big plans for Nigeria