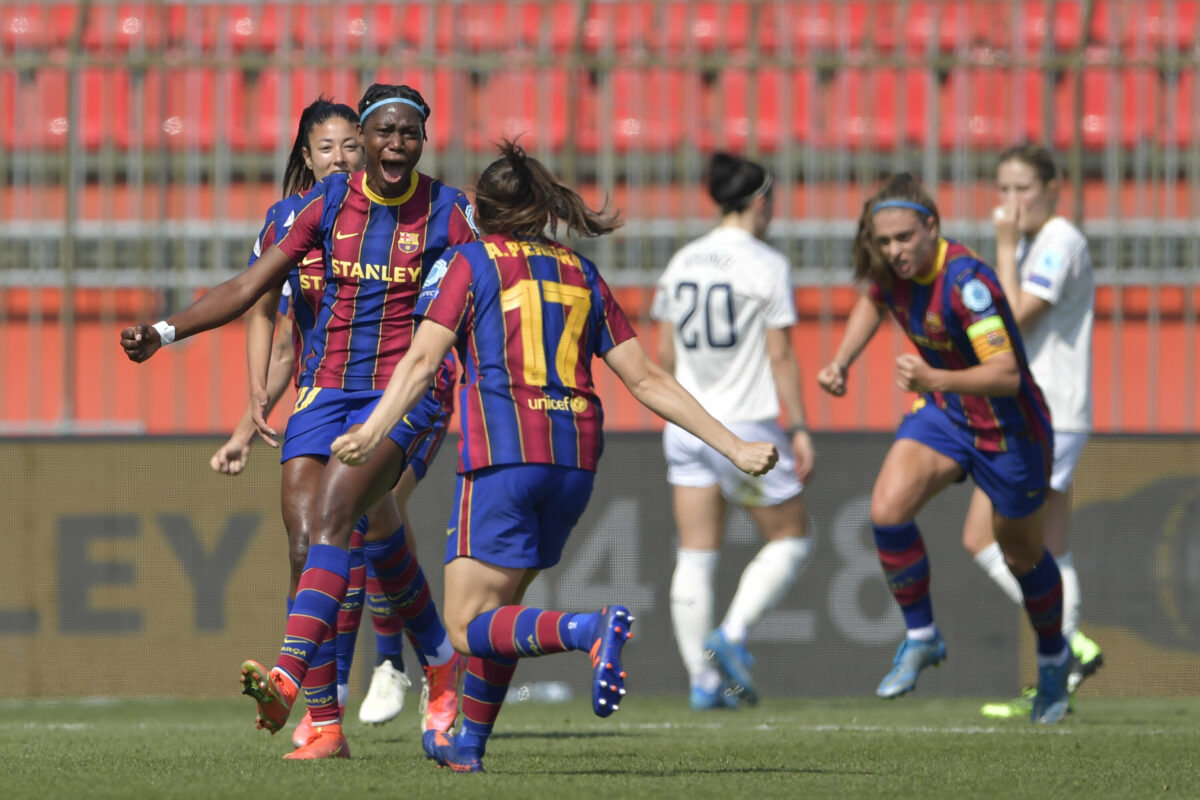 All four UEFA Women’s Champions League quarterfinals matchups will head into next week’s second leg with one team holding a decisive advantage. Barcelona, Chelsea, Lyon and Bayern Munich all prevailed in their opening-leg games on Wednesday.

Barcelona and Bayern each won 3-0, with Barca’s result proving the most emphatic given the opponent. Asisat Oshoala opened the scoring in the 35th minute with a pinpoint finish from 18 yards out, and Mariona Caldentey added another goal from the penalty spot eight minutes after halftime. Jenni Hermoso’s goal four minutes from time is the dagger which put Manchester City in a steep hole heading into the second leg.

Chloe Kelly’s inability to convert from the spot in the second half also proved costly. Barca goalkeeper Sandra Panos rather comfortably saved the effort, which was hit high and up the middle.

The defeat snapped City’s nine-match winning streak and was their worst loss since falling falling to Arsenal 4-0 in August 2014.

Wednesday’s match was played in Monza, Italy, due to COVID-19 travel restrictions. Barcelona was considered the ‘home’ team for the first leg. The second leg will be played in Manchester.

Get Extra and get more

Another neutral-site game due to travel restrictions was also among the most interesting. Chelsea prevailed over Wolfsburg, 2-1 in Budapest, where the second leg will also be played next week. Chelsea was considered the home team on Wednesday.

Sam Kerr opened the scoring 10 minutes after halftime on a feed from — who else? — Fran Kirby. Pernille Harder doubled that lead nine minutes later, scoring against her former team.

Wolfsburg pulled back a goal quickly, however, with Dominique Janssen converting from the penalty spot in the 70th minute to keep things tight heading into the second leg.

Wendie Renard’s 86th-minute penalty-kick conversion was the difference in the first leg, and crucially gave Lyon an away goal at the Parc des Princes. The penalty was awarded controversially for a handball called on Formiga. The call itself might have been harsh — and the determination that it occurred inside the box was perhaps even tougher luck on PSG.

@OLfeminin strikes first, courtesy of a Wendie Renard penalty. This was the hand ball from Formiga that produced the PK. Do you agree with the call? #UWCL pic.twitter.com/OzNDjpEpNd

There will be plenty to play for in leg two as Lyon tries to keep hopes alive for a sixth consecutive European title. These two teams were due to meet in league play the week prior but had the game postponed due to a COVID-19 outbreak inside the PSG camp. PSG leads the league and that game will likely decide the title in France — whenever it gets played.

It was straightforward from the outset for Bayern in their home leg in Munich. Linda Dallmann opened the scoring nine minutes in and Klara Buhl doubled the lead in the 28th minute. Lineth Beerensteyn added the third goal for cushion in the 65th minute.

Rosengard face a significant uphill battle in the return leg in Malmo next week.