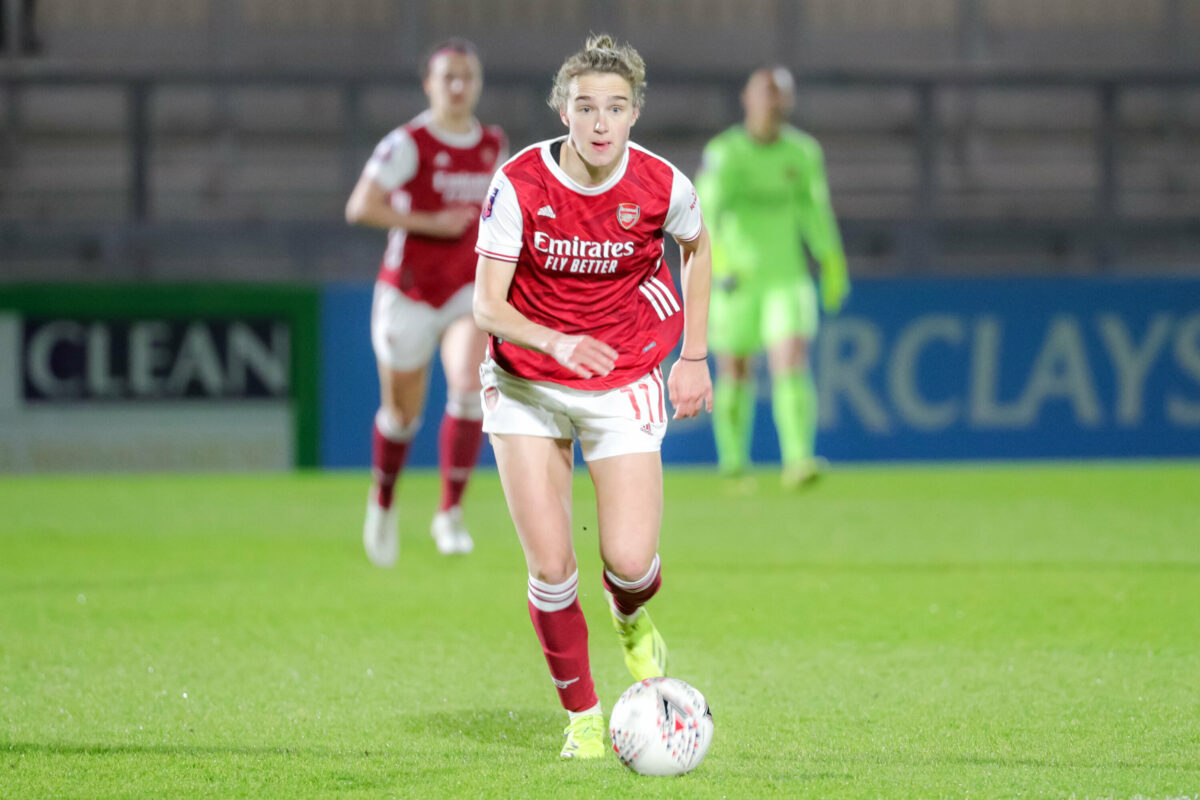 Arsenal picked up a big win over United in the Women’s Super League last week, while Chelsea and City continued their winning ways.

Off the pitch, a landmark broadcast deal was announced on Monday morning that will bring unprecedented media attention to the league. The three-year, multi-million pound agreement will have Sky Sports show up to 44 matches per season, with 22 more live matches being shown by the BBC.

Read on for the league’s news and highlights from the past week:

Arsenal earned their first win of the season against a top three opponent on Friday, when they blanked Manchester United, 2-0.

In the standout match of the week, both teams were missing key players — Arsenal with a number of defenders missing, including Leah Williamson and Jen Beattie, and United low on attacking depth, still missing Tobin Heath, Alessia Russo and Leah Galton.

Arsenal struck first, in just the third minute. Pressing deep in United’s half, Arsenal forced a turnover, and after a few crisp passes, Jill Roord’s shot deflected off of Millie Turner and into United’s goal.

After the goal, United’s Lauren James and Christen Press (who started and played the full 90) combined well on a few occasions to threaten for the equalizer. Sloppy passing out of the back by Arsenal made things worse for the Gunners at times, but they managed to withstand the pressure and make it to the half in the lead.

And after the break, Arsenal defender Lotta Wubben-Moy added a second. Rising above Katie Zelem, Wubben-Moy managed to get her head on a corner kick sent in by Katie McCabe to double the lead.

Despite being left with 10 players for much of the second half after Beth Mead was sent off for two yellow cards, Arsenal managed to hang onto the win.

Those three points are massive for Arsenal, and may help decide the third and final Champions League qualifier from the WSL for next season. Although Arsenal still trail United by three points in the table, they have a game in hand to make them up. Arsenal also have a much better goal differential than United (+36 to +17) which would be the tiebreaker.

Goals by Caroline Weir, Ellen White, and Sam Mewis secured a 3-0 win for Manchester City over Bristol City on Wednesday. It was City’s 10th WSL win in a row, and kept them firmly in second place in the table, two points behind Chelsea.

Mewis played the full 90, as did Abby Dahlkemper. Rose Lavelle, who is still having difficulty regularly breaking into City’s starting eleven, came on as a substitute in the 81st minute.

This week’s edition of The Equalizer Podcast discussed Lavelle’s future at Manchester City, and in the NWSL:

Due to COVID restrictions, City will travel to Monza, Italy, to play Barcelona on Wednesday in the first leg of the Champions League quarterfinals.

Chelsea’s Sam Kerr, Fran Kirby and Pernille Harder again showed off their strong connection on Wednesday in a 3-0 win over Everton.

Kerr assisted Kirby on Chelsea first goal, and Kerr and Kirby set-up Harder for the the team’s second. A defensive error by Everton put the ball on a platter for Melanie Leupolz late in the second half for Chelsea’s third goal.

Chelsea will travel to Budapest for the first leg of the Champions League quarterfinals against Wolfsburg on Wednesday. Their defensive depth will be tested in the last stretch of the season, as it was confirmed this week that defender Maren Mjelde will miss the remainder of the season with a knee injury sustained in the team’s Continental Cup Final win.

An opening goal by Aileen Whelan, and a converted penalty by Inessa Kaagman earned Brighton their fourth WSL win in a row on Wednesday. They now occupy sixth place in the table, with 21 points — a marked improvement for the Seagulls, who were in ninth place at the start of the new year.

Meanwhile, Aston Villa are in the thick of the relegation battle, as they sit in 10th place with 10 points.

A late goal by Ruby Mace earned Birmingham a much needed point against West Ham on Wednesday.

After a tumultuous season, including an exodus of players prior to the season’s start, a number of match postponements, and being forced to forfeit a match due to a lack of fit players, Birmingham find themselves in 9th place, amongst the bottom four and in the relegation battle.

Ruby Mace rescues a point for @BCFCwomen at the death! 😅#BarclaysFAWSL pic.twitter.com/gF7Gx5wfwW

The points were shared on Sunday at The Hive between Spurs and Bristol City. Tottenham struck first, as Siri Worm perfectly bent a free kick around Bristol’s wall in the third minute of play for the opener. Bristol responded in the second half, when Gemma Evans headed a corner kick sent in by Ella Mastrantonio.

The point moved Bristol out of the bottom spot in the table, which is now occupied by West Ham, though the Hammers have two games in hand.

The @SpursWomen defender bends her strike into the Bristol City net early on! 🚀#BarclaysFAWSL pic.twitter.com/Aev85CiO1d