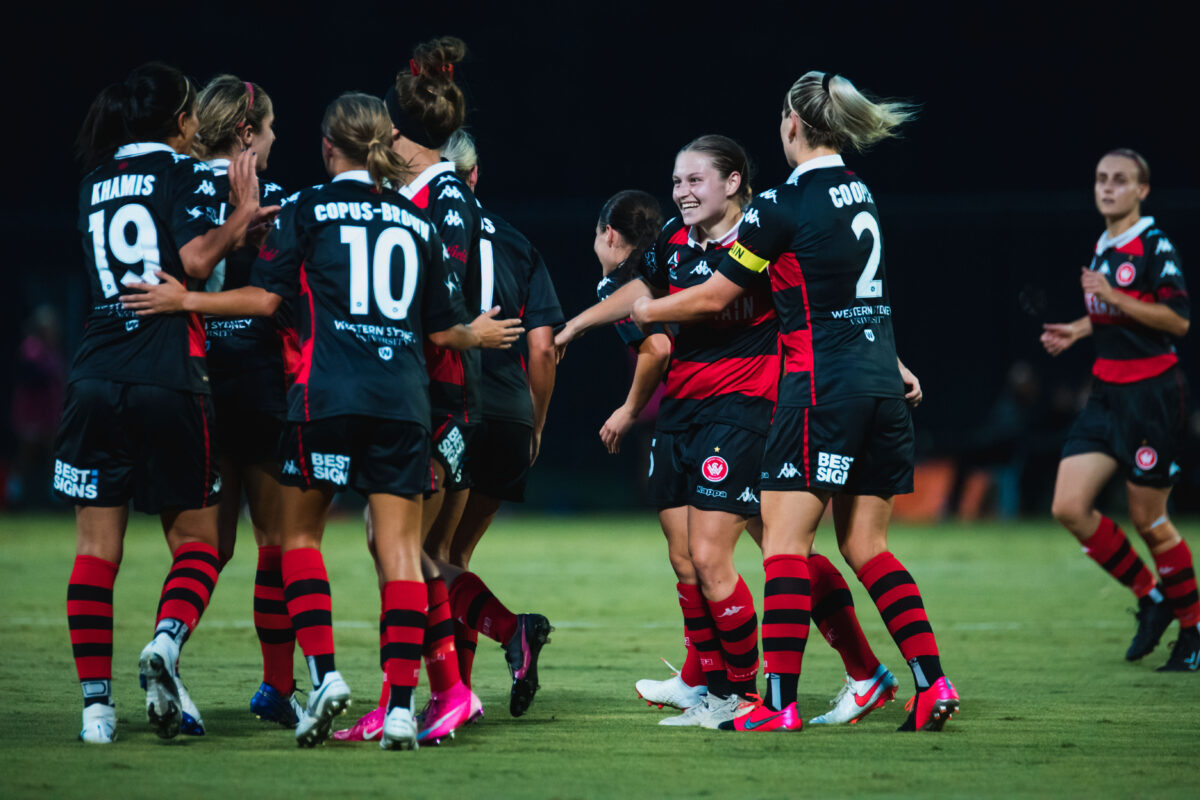 The playoff race comes down to the final round next week as Canberra United and Adelaide United secured wins. Meanwhile, the match between the Melbourne Victory and Sydney FC was rained out.

Melbourne City won their third match of the season on March 21 in a 1-0 win on the road against Perth Glory in front of 271 fans. Forward Rhali Dobson scored from close range in the 67th minute for her first goal of the season after an insightful pass from Alex Chidiac. Dobson now has 13 goals in 108 W-League matches over 11 seasons.

Long-time Matilda goalkeeper and City assistant coach Melissa Barbieri recorded her second consecutive shutout of the season — finishing with three saves against the Glory — following Melbourne’s defeat of Newcastle Jets 1-0 on March 14. Melbourne City were worthy winners with more than double the possession (68% vs. 32%) and healthy advantages in shots (13 vs. 6) and corners (8 vs. 2) compared with Perth, though the two sides had 3 shots on goal apiece.

Michelle Heyman scored her tenth goal of the season in the 22nd minute for the only goal of the game to give Canberra United a 1-0 win at the Newcastle Jets. Heyman also hit the crossbar with a blast in first half injury time. A crowd of 437 on March 20 turned out for a game that managed to avoid the hard rain that has plagued the New South Wales coast until the final minutes of the game.

Heyman hit the century mark in W-League matches over 12 seasons, nine with Canberra. Clare Coelho was outstanding in goal and made eight saves to keep the Jets, who was missing their leading scorer Tara Andrews with an ankle strain, in the match. The win moved the Greens into fourth place and a playoff position at the end of the round, up from fifth at the beginning of the weekend.

Adelaide United defeated Western Sydney Wanderers 3-1 on March 21 at Coopers Stadium in Adelaide in front of an all-time record stand-alone (without an A-League doubleheader) home crowd of 5,159 in their last regular season match of 2020-21. Olivia Price gave the Wanderers the early lead with a fourth minute goal.

Isabel Hodgson scored in the 18th minute to tie the match, Dutch import Maruschka Waldus gave the Reds the lead in the 50th minute and English forward Fiona Worts secured the win with a goal just after the hour mark. All three Adelaide scorers each recorded their second goal of the season. Adelaide finishes the 2020-21 season with an all-time record best of 7 wins and 22 points.

We have set a new attendance record for a standalone @WLeague regular season game with 5,159 here at @CoopersStadium today. 🏟️👏

They moved up to a tie for second with Brisbane, one point ahead of Canberra United on 21 and two ahead of Melbourne Victory, but Brisbane and Canberra each has one game remaining and Melbourne Victory has two, so Adelaide must hope that one or both sides drops points in their remaining games to that they can make history with their first ever playoff match in two weeks’ time.

If Brisbane loses next week at home to Newcastle (which on current form for both teams is unlikely), the Roar’s superior goal differential compared with Adelaide (+14 to +4) would edge them ahead of the Reds for a berth. If the Reds don’t make the playoffs in their record-breaking season, it would be ironic in that their 22 points would have given them a semifinal spot in each of the past six seasons; in some cases a team qualified with as few as 16 points from 12 games.

.@FionaWorts makes sense of it all and slots it in close!

Adelaide’s first year head coach Adrian Stenta told FOX Sports after the game that their record crowd, “Was a very proud moment. It shows we’re a football state and if you put on a good show, people will come out to support and I hope we are one of the cities to host in the Women’s World Cup and I know the whole state will get behind it.”

On March 20, Sydney FC’s home match against Melbourne Victory, part of an W-League/W-League doubleheader, was postponed due to a waterlogged field after a “rain-bomb” hit the New South Wales coast. Approximately 16 inches of rain fell in the area prior to the game, with another 2-4 inches expected on Sunday. The date of the key match for playoff positioning had not been announced by press time.

The former East Tennessee State University player (2015-2018) was crucial in helping Adelaide United settle after going behind early to Western Sydney in front of their record home crowd of 5,159, striking home a great goal in the 18th minute mark. She also contributed two tackles, won five of eight duels with opponents and gained possession for her side once after a foul was called on WSW.

Clare Polkinghorne will join Vittsjo in Sweden in 2021

Brisbane Roar center back Clare Polkinghorne has signed with Swedish Damallsvenskan side Vittsjo for the 2021 season. The overachieving village side (home to less than 1,700 people) has finished third and fifth respectively in the last two seasons and had current W-League leading scorer Emily Gielnik (also of Brisbane) on the team for the second half of the 2020 season, scoring eight goals in 16 matches.

Polkinghorne will play in the final Roar regular season game at home next week against the Newcastle Jets but will miss the playoffs. Polkinghorne has played three seasons in the NWSL in Portland (2015) and Houston (2018-19) as well as in Japan and with Alvadsnes in Norway in 2020.

Polkinghorne explained her move to the Roar website, “An opportunity came up in Sweden and the club [Brisbane] has been really supportive in me pursuing that opportunity. Obviously the timing of it all is disappointing for me, but it’s an opportunity I need to take to ensure that I’m playing regular football at a high standard throughout the year and preparing in the best possible environment for the Olympics. Right from the start the Club has been very accommodating and it helps that we have had open communication throughout the whole process. It’s a club I love playing for. We’ve had a very solid year and it’s a whole team effort. No matter who is on the field we’ve got the players to do the job and I’ve got 100 per cent confidence in the players to do that.”

Polkinghorne has played in 151 W-League matches to date (only two behind all-time appearance leader Teresa Polias of Sydney FC with 153), all with the Roar, and in 126 games with the Matildas.

How about that race to the finals! 🏃🤯