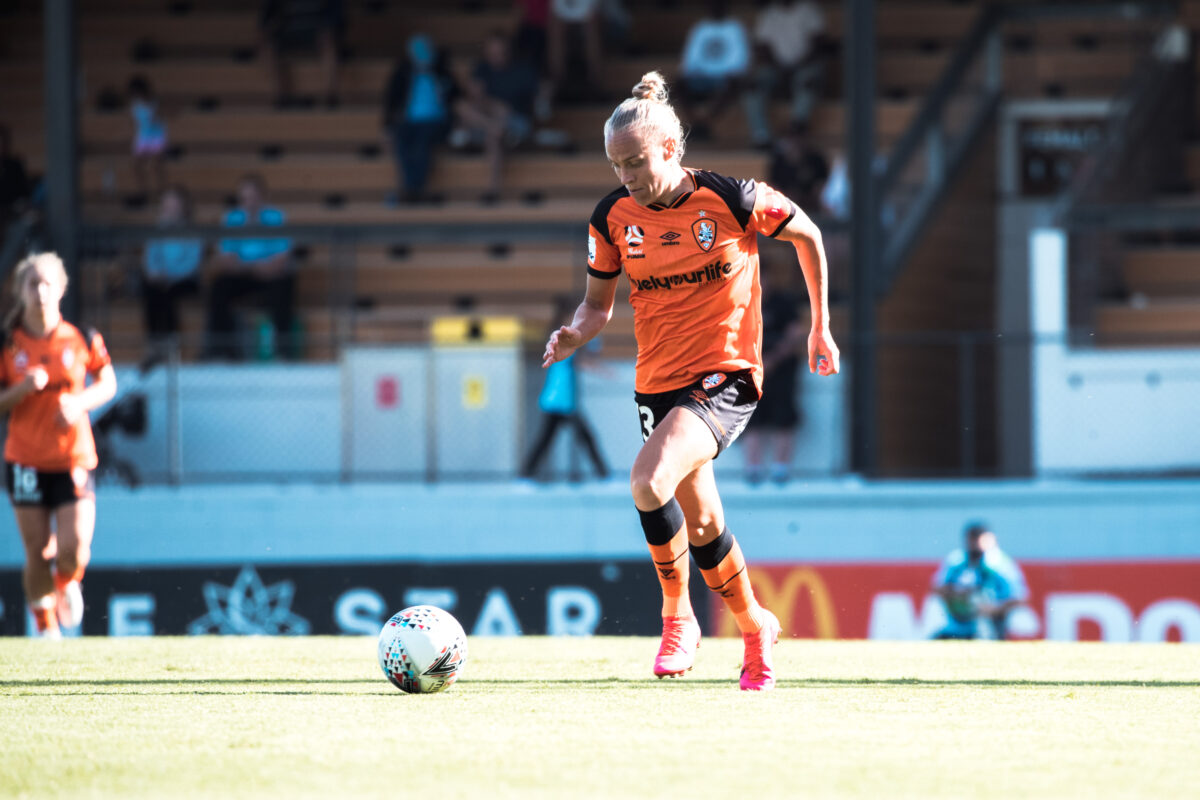 In the latest slew of W-League action, Canberra United won again in injury time, while the Melbourne Victory topped Perth Glory to jump into third place.

Melbourne City bounced back from their painful 4-0 loss three days before to the Wanderers to record a narrow 1-0 home win over the Newcastle Jets on March 14. Former Japanese international Chinatsu Kira (29) bundled home the only goal of the game in the 42nd minute from the edge of the goal post, her first in nine games for the club.

Tori Tumeth (20) assisted on the goal from a long cross from the right side, as Kira had just missed scoring on a cross from the young wingback in the previous minute. Tumeth has captained Australia’s U-17 national team and been a member of the U-20 side. She is in her first season of the W-League after playing with Sydney University at the state level and is seen as a player to watch in the future.

Melbourne had a slight edge in possession (53% vs. 47%), shots (12 vs. 9) and shots on target (6 vs. 4) compared with Newcastle. City assistant coach Melissa Barbieri earned the shutout in goal with four saves in her second match of the season (see above) in an emergency situation while the Jets Claire Coelho saved five shots, including some dangerous chances that could have further extended the City lead.

With the victory, City earned its second win of the season and the two sides are again joint even for seventh place, with Newcastle having a much better goal differential (-3 vs. -14).

Western Sydney Wanderers used a first half brace by Bryleen Henry and then a second half double by Rosie Galea—her second two-goal game of the season — to dispatch Melbourne City in a 4-0 away win on March 11. The final goal came in the 82nd minute after forward Leena Khamis sent a ball across the penalty box for Galea to bury into the net.

Henry (17) joined the Wanderers for her first W-League season from the Football NSW Institute NPLW side, where she scored 7 goals in 10 games in 2020. Henry is an Australian U-17 national team member and was invited to the pre-season Matilda identification camp for local players. Galea scored two goals earlier in the season against the Newcastle Jets in a 2-1 home win on Jan. 2. Tiegan Collister had two assists and tormented the City backline all game with her tremendous speed on the wing and passing ability; she also won three tackles, 6 of 13 duels with opponents and had three clearances as well.

WHOA! Rosie Galea in the DYING moments with a S-T-R-I-K-E! 💥

One interesting starter was assistant coach Melissa Barbieri (41) in goal for Melbourne City; she had not played a league match since appearing once in 2017-18 with City. She had four saves against the Wanderers and played her 74 league games across 9 seasons with Melbourne Victory, Newcastle Jets, Adelaide United and Melbourne City. She won 93 caps for the Matildas from 2002-15, including being a member of four Women’s World Cup Finals teams.

The Wanderers won their third game in their last four, including doing the double over City. The Wanderers have now won three games over the 2019-20 reigning champions in 8 games in the history of the Melbourne City series, with their first victory coming at home back in the 2016-17 season. This was their first ever defeat of City in Melbourne.

Canberra United earned a vital 3-2 win at home on March 11, though technically it was a Perth Glory home match that had to be staged in Queensland due to a scrambled schedule from COVID; again it came down to an injury-time winning goal—the club’s third of the season—with all-time W-League leading scorer Michelle Heyman scoring for the precious three points.

Heyman had two goals in the game and now has 9 on the season and 72 goals all-time in the W-League, surpassing previous leader Sam Kerr with 70; Kerr is now at Chelsea in England. Nicki Flannery scored the first goal for Canberra in the 36th minute with her fourth goal of the season before Perth’s Caitin Doeglas scored her second in 2020-21 in the 41st minute to take the teams level into the halftime break.

The game had no leader in the 94th minute 🥵@Mheyman23. Clutch.

Heyman then scored on a second attempt after Glory goalkeeper Lily Alfeld came out of her box to snuff her first shot, but the veteran striker followed up and turned to loft the ball into the net, giving Canberra the lead in the 54th minute. Perth’s Katarina Jukic (31) scored her first goal of the season on a thirty yard strike in the 71st minute after catching United goalkeeper Keeley Richards off of her line. For Jukic, it was her third goal in 34 league games stretching across five seasons, dating back to the league’s inaugural season of 2008-09.

Former Seattle Reign defender Kendall Fletcher then missed two late penalty kicks from successive corner kicks for Canberra within two minutes—the first hitting the post and bouncing away after Natasha Rigby took Fletcher down in the penalty area and the second sliding just outside of the post, while Sarah Carroll was dismissed in the 88th minute for her second yellow card after making a few pointed comments about the hand ball called on her that led to the second penalty; Heyman’s late heroics however saved the three points for Canberra United.

A positive for Perth is that they have started to score in their last three games after only scoring twice in their first five, with four coming against playoff caliber teams, two goals in a 6-2 loss to Sydney FC on February 25 and their two tallies this round against Canberra.

On March 12, Emily Gielnik scored a hat trick in just over 20 minutes in the second half to lead Brisbane Roar to a 4-2 home win over Adelaide United. The two sides were tied on points for second entering the match and the win gives the Roar the inside track to a top two finish and hosting rights for a semifinal playoff match.

For Adelaide United, after the euphoria of their 2-0 win over Sydney FC last week, they will still need points next week at home against an improving Western Sydney Wanderers in their final regular season game and Canberra and/or Melbourne Victory to drop points in their remaining fixtures to ensure their first ever playoff berth.

.@EGielnik messed around and secured a hat-trick 🎩

Brazilian native Mariel Hecker scored her fourth goal of the season to start Brisbane off in the right direction in the 22nd minute before Gielnik added goals in the 62nd, 72nd and 80th minutes; the Matilda striker now has 12 goals on the season, three ahead of Canberra’s Michelle Heyman. Gielnik is fifth among all-time among W-League goal scorers with 45 goals in 108 W-League games across 10 league campaigns, nine with the Roar and one with Melbourne Victory in 2018-19.

Former Australian U-17 international Chelsie Dawber (21) scored once in each half for the Reds and leads her side with five goals on the season.

Melbourne Victory pulled itself back into third place with a hard-fought 1-0 victory on March 16 over Perth Glory at Dorrien Gardens in West Perth. New Zealander international Annalie Longo scored her second consecutive game winner (both in 1-0 victories) in the 62nd minute for the vital win for MV’s playoff hopes.

Kyra Cooney-Cross dribbled into the penalty area near the touchline and cut the ball back on a short pass to Longo, who was making a late run, and she scored easily past her fellow Kiwi Lily Alfeld in the Perth goal for her third tally of the year. American-raised Argentinian international goalkeeper Gaby Garton had 6 saves to preserve the shutout, a league-leading sixth of the season in ten games with the club.

Forget about taking the lead in all-time W-League goal scoring with her first strike against Perth, it was her second in the 95th minute — her second injury-time winner of the season — that kept the Greens playoff hopes alive and emphasized how vital Michelle Heyman has been to the team since returning to the W-League after retiring at the end of the 2018/19 season when she played at Adelaide United.

From becoming a @CanberraUnited legend to enjoying some healthy competition with @samkerr1 😏@Mheyman23 is in the form of her life and her new all-time Westfield #WLeague goalscorer title is the cherry on top 🍰 #UnitedAlways pic.twitter.com/XPQj7Ujw5p

With her leadership and nine goals, she has been an immeasurable asset to Vicki Linton in her first season at head coach in the Australian Capital City. She also had a sharp lead pass to Nicki Flannery for the assist on the first goal of the game.

It's getting close at the top of the Westfield #WLeague ladder 👀

Jill Scott is back to her old, successful self at Everton
Liga MX Femenil, Weeks 10 & 11: Cruz Azul makes a big leap on the table