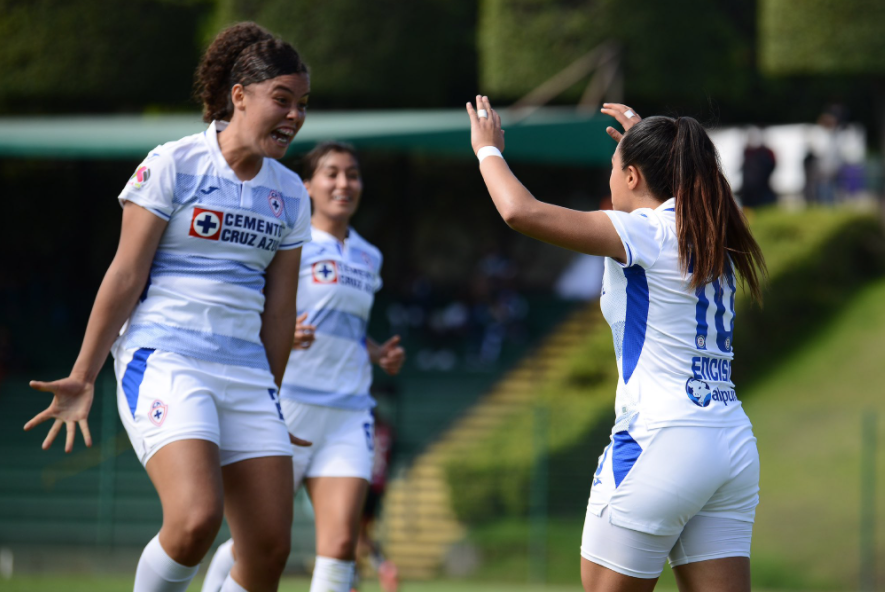 It was the weekend of upsets in Liga MX Femenil. San Luis, Tijuana and Cruz Azul provided the highlight-worthy upsets against teams toward the top of the table. We’ve got all the action recapped here from Mexico!

It turns out that Alison Gonzalez can indeed be stopped. Cruz Azul went on the road to face Atlas and stunned the prolific Gonzalez and Atlas for a 1-0 upset victory. Instead, it was Martha Enciso that scored late in the first half to give Cruz Azul a much-needed three points.

Enciso’s goal came off a free kick, originally taken at the halfway mark and headed toward her by a teammate. Enciso leaped in the air and chipped a header of her own past Atlas goalkeeper Ana Paz.

However, the highlight of the match came from goalkeeper Karla Morales, who earned Goalkeeper of the Week honors by the league. Morales faced off with striker Gonzalez on a penalty kick and made the save.

The loss was Atlas’ first of the Clausura campaign.

Another upset occurred on Monday night, courtesy of home side Tijuana against the visiting Chivas de Guadalajara. Tijuana is picking up the pace after a forgettable Apertura season. Renae Cuellar scored in the 44th minute off a corner kick that bobbled around the box before falling at her feet.

To kick off the second half, Tijuana had a defensive error when Karen Hernandez tapped in an own goal that slowly rolled into her net. However, Rosa Aguiar rectified the mistake with a goal in the 56th minute. Aguiar picked up the ball and volleyed it to herself, smashing it past Chivas goalkeeper Blanca Felix.

Chivas remains in third place, but have some pressure right behind them from Pumas and Monterrey.

In potentially the biggest surprise of the weekend, Atlético San Luis picked up a massive three points against a stunned Club America. Isabel Kasis scored the lone goal in the 41st minute, picking up the rebound from her own shot, which was originally saved — but poorly cleared — by Natalia Acuna.

With the loss, Club América slipped down to sixth place, while San Luis made a big leap to 13th place.

Querétaro slipped down the Liga MX Femenil table with a home loss to Pachuca on Thursday night. First-half goals from Esbeydi Salazar and Monica Ocampo got Pachuca off to a fiery start. The goals were only two minutes apart from each other. Salazar’s goal came off a steal inside the Querétaro half of the pitch.

In the 81st minute, three points were wrapped up for Pachuca when Querétaro midfielder Sofia Alvarez scored an own goal while trying to deflect the ball with her head.

In the battle to stay out of last place, Necaxa won the right to move up a spot, while Puebla now sits at the bottom. Necaxa got off to a hot start with Reyna Velazquez scoring off a corner kick only one minute into the match. In the 10th minute, Iraida Fernandez fought her defender and fired off a shot inside the penalty area.

Right before the half ended, Teresa Worbis scored for Puebla. Worbis also scored the final Puebla goal in the 90th minute. However, a goal from Maria Acosta in the 78th minute for Necaxa prevented the visiting team from taking any points.

The victory was the first for Necaxa in the Clausura. Puebla is still looking for their first win.

Tigres went on the road and blanked home side Pumas on Saturday afternoon. Tigres had four different goal scorers, with three of the four goals coming in the first half. Once again, Stephany Mayor and Maria Sanchez found their names on the Tigres scoresheet. Sanchez scored the lone second half goal.

Blanca Solis scored in the 4th minute off a volley to herself. Less than 10 minutes later, Belen Cruz scored off a corner kick, in which she sent her header past Melany Villeda. Mayor finished off the first-half scoring fest with a 20th minute angled shot past Villeda.

Sanchez, completely unmarked, found herself at the far post and slipped in the cross, putting the final nail in the coffin for Pumas. Tigres leaped over Atlas for the top spot with the victory, while Pumas remains in fourth place.

Toluca and FC Juárez split the points with a scoreless draw. Toluca is hanging on to seventh place, while FC Juárez is toward the bottom of the table, sitting in 15th place.

Santos Laguna is picking up some momentum with their last few matches providing points. While three points is still rare for the club, they did upset Monterrey on the road by forcing the fifth-place team to a 2-2 draw. Monterrey scored both of their goals in the first half, while both of Santos’ tallies came in the second half.

Monica Monsivais scored in the 18th minute to kick off the scoring action. Monterrey striker Daniela Solis picked up a poor pass-back from Santos and Monsivais calmly put it away. Right before the halftime whistle blew, Yamile Franco picked up yet another poor deflection from Santos and struck it past Wendy Toledo.

However, Santos picked up the pace in the second half, with Alexxandra Ramirez scoring both goals. Her first tally, in the 57th minute, saw her completely unmarked and running inside the box for an easy tap-in goal. In the 82nd minute, she spoiled the party for Monterrey by slipping through three defenders and sliding her shot past Alejandria Godinez.

Club León dropped three points at home to Mazatlán, but certainly did not go down without a fight. Magaly Cortes scored in the 27th minute and Melisa Ramos found the back of the net in the 35th minute for Mazatlán, giving the visitors all the momentum heading into halftime.

However, León attempted to mount a comeback with a Claudia Cid goal in the 85th minute off a free kick tap-in. Despite the momentum, León could not muster up enough for another goal and a potential comeback. Mazatlán took the three points and slotted themselves in 11th place.