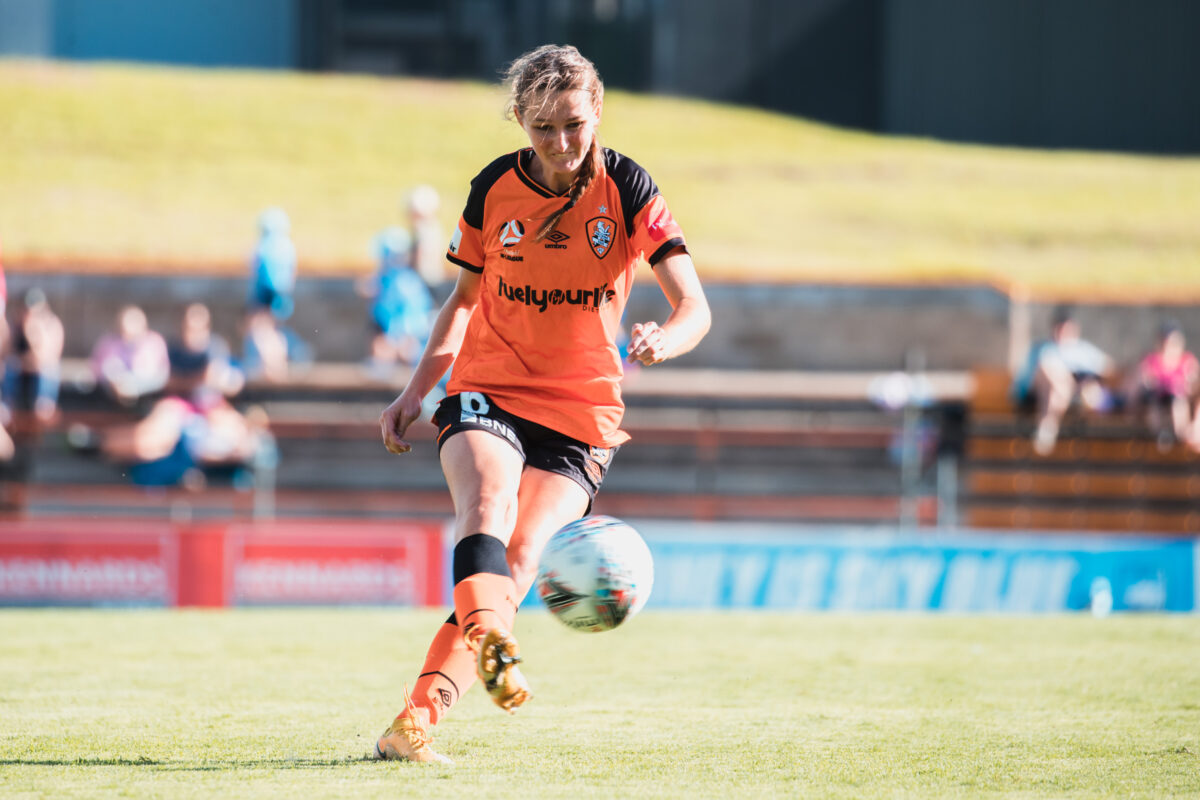 This weekend in Australia, Adelaide United blanked Sydney FC in a historic win and are in full sail for their first ever playoff berth. Meanwhile, Brisbane Roar lost their first game of the season at Canberra as the playoff race tightens.

In arguably the biggest win in franchise history, Adelaide United shocked Sydney FC with a 2-0 victory in front of a home crowd of 987 on March 6. The Reds scored both goals within 20 minutes of kickoff, with Netherlands native Maruschka Waldus (ex-University of Alabama) striking first in the fifth minute and Kansas City NWSL loanee Mallory Weber (ex-Penn State University) scoring her second goal of the season in the 19th minute.

Waldus scored on a header from the far post off of a corner kick for her first goal of the year and had another header hit the crossbar with just over 10 minutes remaining in the second half. Weber retrieved a ball far out on the left wing and shrugged off Australian international youth defender Angelique Hristodoulou and then dribbled uninhibited into the Sydney FC goal area, where she blasted a long curling shot into the far corner of the net.

.@Mal_Weber16 piercing the back of the net off her right 👟

The loss was only Sydney’s second on the season and the first time that the W-League’s highest scoring side (24 goals) was shut out in ten games — they didn’t even earn any corner kicks at all, though Remy Siemsen thought that she had her eighth goal of the season late in the first half after taking an excellent Cortnee Vine cross and scoring, but the forward was flagged for offside. For Adelaide, history was made as they set club records for wins in a season (6) and points (19), surpassing five wins and 18 points that they achieved two seasons ago. The win was only their third all-time against Sydney in 19 matches, with 16 losses.

On March 7, Canberra United raced out to a 3-0 lead within the first half hour against Brisbane Roar and finished with a crucial 4-1 victory in front of 1,161 fans at Viking Park. Nicki Flannery started the scoring in the tenth minute with her third goal of the season from a Grace Maher assist, then Maher scored her second of the season in the 23rd minute on a 30 yard blast that goalkeeper Morgan Aquino got her hands to but couldn’t keep out of her goal.

In the 29th minute, Michelle Heyman scored her seventh goal of the season which tied her for the lead for all-time W-League goal scorers with Matilda and Chelsea forward Sam Kerr on 70 goals. Emily Gielnik scored her ninth goal of the season just before the halftime break, to widen her lead in the Golden Boot race by two goals over Heyman and Remy Siemsen (Sydney FC).

Twenty-one-year old midfielder Bianca Galic scored her first goal in the W-League after seven games in the 64th minute on her own 30 yard plus blast down the middle of the park to finish the scoring for the Greens. Galic is in her first W-League season after playing with Sydney University in the NSLW.

Next week, the Roar will be home to Adelaide in a match between the two sides tied for second (though the Roar have a better goal differential: +12 vs. +4) while Canberra — two points out of a playoff berth — travels to Perth.

The Newcastle Jets travelled across the country on March 8 and defeated Perth Glory 4-0 to snap a four game losing streak and move ahead of Melbourne City for sole position of seventh place, only three points behind the Western Sydney Wanderers in sixth. Newcastle has played one more game than City and one fewer than the Wanderers and travel to Melbourne to meet City next weekend. Rhianna Pollicina (24) scored her second goal of the season in the 29th minute for the only goal that the Jets would need for the win.

Former Australian youth international Sunny Franco (23) scored a brace either side of halftime for her first scores of the season. Lauren Allen (24), who played collegiately at Butler University in Indiana and Anderson University in South Carolina, scored her third goal of the year with 7 minutes left in the match for the resounding Newcastle victory.

A sneaky, sneaky goal from Lauren Allan to put @NewcastleJetsFC up 4! 🤭

For the Glory, they are in danger of going through the season without a win (their lowest season total was two victories in 2011/12) and could also set a record for fewest points with only one so far (breaking 6 in the same season). Last season, they had a 3-2-7 (W-D-L) record for 11 points, but NWSL loanee Morgan Andrews scored seven goals, three more than the club has this season to date.

New head coach Alex Epakis had a stellar career in the NPLW in leading Sydney University to state league titles in 2018, 2019 and 2020, but he will have some serious roster re-crafting to do in the off-season to improve his squad’s results in 2021/22. Perth has been more affected by scheduling changes and state COVID-19 restrictions than other clubs.

Melbourne Victory defeated Western Sydney Wanderers 1-0 in an important home match on March 4. The win further solidifies MV’s path to a third consecutive final four appearance. New Zealand international Annalie Longo scored her second goal of the year just before halftime. Kyra Cooney Cross started the play with a free kick into the box that Melina Ayers nodded towards the goal, where Longo controlled it a foot away from the goal line and knocked it into the net.

Longo had moved up into the starting lineup in the attack since American and team leading scorer Cat Zimmerman was still unavailable with an injury she received in last week’s game. The Victory had the edge in possession over the Wanderers (54% vs. 46%), for shots (16 vs. 10), shots on goal (6 vs. 1) and corner kicks (9 vs. 4). Longo’s New Zealand international teammate Claudia Bunge was outstanding in defense with a 67% passing accuracy on 48 attempts, winning two of four tackles, six of nine duels and finishing with a game high ten clearances, six more than any other player in the game.

.@annalielongo with the QUICK strike to put the Victory up!

For Wanderers, their playoff hopes are mathematically alive but only fractionally so and they effectively need to think about next year in order to build a side to make the playoffs again after debuting in the final four last season, albeit with a stellar crew of NWSL loanees, primarily from the North Carolina Courage.

Well-traveled Dutch defender Maruschka Waldus — who played one game for Sky Blue FC in the NWSL in 2015 and has played with clubs in Germany, Iceland, the Netherlands, Norway and Sweden — not only scored the winning goal in Adelaide’s historic 2-0 win over Sydney FC but led a resolute defense with a 76% passing accuracy rate on 50 passes, won five of her seven duels and provided three clearances in the back. She intercepted the ball a team leading six times in a stellar overall performance. She helped Valerenga of Oslo win the Norwegian Toppserien title for the first time in 2020.

Adelaide United’s captain and midfielder Dylan Holmes (23), who played a few years in the U.S. at Colgate University, has just signed for Swedish Damallsvenskan champions BK Hacken. Holmes was sold by Adelaide to Hacken and she played her last match of the season for the Reds in their 2-0 home defeat of Sydney FC on March 6, her 41st game for the club across four seasons.

Hacken, which played for years in Sweden as Kopparbergs-Goteborg FC, had a traumatic offseason after clinching their first ever league crown in November (the club where U.S. international Emily Sonnett played in 2020 on loan) when their brewery owner decided he couldn’t compete against the likes of Olympique Lyon and Wolfsburg for a Women’s Champions League title and bizarrely yanked the club’s funding. At one point, it looked like the players would be dispersed to other sides around the league but local men’s club BK Hacken took over the franchise so the second largest city in Sweden remains in the top women’s league.

A heartfelt goodbye for @DylanHolmes08 ♥

Holmes, a native of Adelaide, said about her move, “This has been an incredibly difficult decision to make, probably one of the hardest decisions I’ve made in my career, but the opportunity to play in Sweden and really test myself in a very strong European league is something I couldn’t turn down…. I’ll always be grateful to have represented my hometown team for a number of seasons now, and the massive privilege of leading an amazing group of girls as captain this season.”

The fight for a finals spot continues! 🤺

This is the Westfield #WLeague ladder presented by Bunnings Warehouse. pic.twitter.com/5OJQ8tuSs3