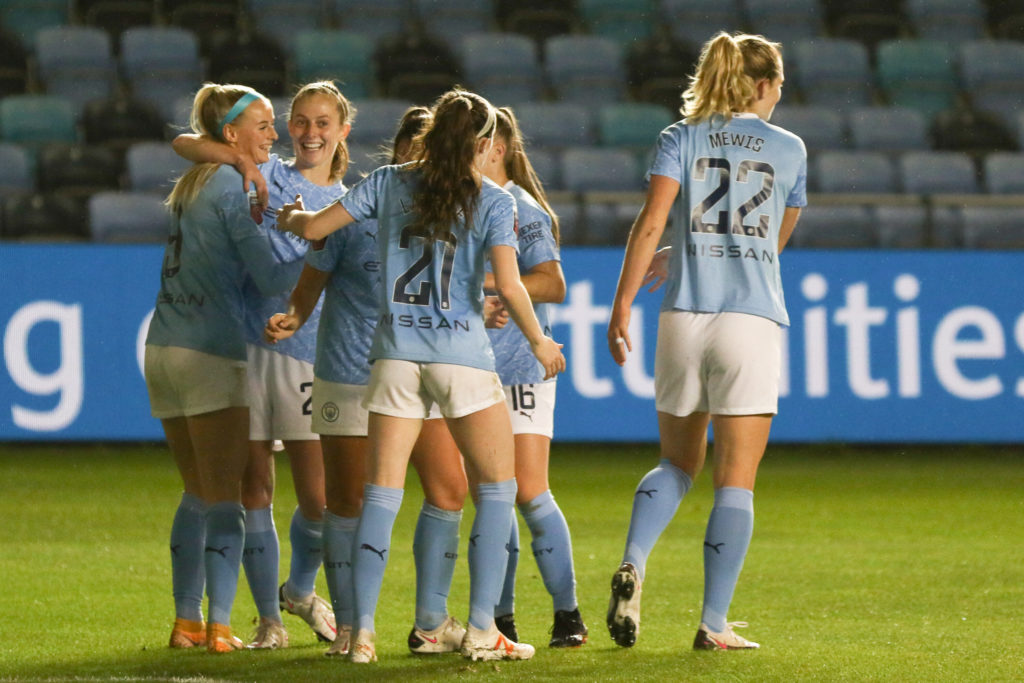 Smooth wins from Chelsea, Manchester United and Arsenal marked Week 18 in the Women’s Super League, while a superb strike from Manchester City’s Kiera Walsh earned her side a late win over Everton. Elsewhere, Brighton defeated an unlucky Spurs squad, and Bristol prevailed dramatically over Reading to move out of the bottom spot in the table.

We recap the week in WSL news below, and how City and Chelsea’s wins in the Champions League Round of 16 went down.

Moving on up ⏫@bristolcitywfc move out of the relegation zone with a victory this evening! 👏#BarclaysFAWSL pic.twitter.com/rVfhU9tmTG

Solid defending from both City and Everton was on display on Sunday, and both sides struggled to generate dangerous chances on goal. Sam Mewis managed the best chance in the first half for City, but her first-time shot was hit wide.

The struggle continued into the second half, but a draw wasn’t in the cards for the match. In the 81st minute, Manchester City counter-attacked with pace, and a cross from Lauren Hemp found Kiera Walsh on the top of Everton’s 18-yard-box. Walsh hit the first time shot well, and it curled past Everton keeper Sandy MacIver for the late winner.

And there it is! ‼️ Keira Walsh’s one-timer breaks the deadlock, and Man City lead Everton 1-0. pic.twitter.com/W6vS7YTWcm

The match was captain Steph Houghton’s 200th appearance for City, making her the first player to reach the milestone for the Citizens.

Aston Villa struggled to keep possession of the ball in a dominant performance by Manchester United on Sunday. Goals from Kirsty Hanson, Jess Sigsworth and Katie Zelem earned the Red Devils three points, and put them back on track after two straight losses in the league.

United’s second by Sigsworth was the cream of the crop – a bullet of a header that Villa keeper Lisa Weiss had no chance to stop.

What a header by Jess Sigsworth! 💥 United are up 2-0 at the half over Aston Villa. pic.twitter.com/naBeND4Pou

Christen Press was unavailable for the match, as United said she picked up a “slight knock” in training last week.

On Sunday, Birmingham did well to hold off Arsenal’s attack for the opening 30 minutes, but then the floodgates opened. Caitlin Foord finished two crosses, two minutes apart to earn a brace and put her side up 2-0 at the half. That’s nine goals total so far this season for the Australian forward.

Second half goals for Arsenal were added by Vivianne Miedema and Lisa Evans to round out the 4-0 win. Now with two wins straight, Arsenal have quite possibly a season defining match up ahead against third place Manchester United on March 19.

Kerr and England showed off their lethal partnership on the day, as each assisted the other’s goal. In the 7th minute, England floated in a cross that Kerr finished with a powerful header. Then at the start of the second half, Kerr managed to find England in West Ham’s six-yard-box, and England finished with a header of her own.

Flip it and reverse it! 🔄

With the win, the Blues still hold top spot in the table, two points ahead of Manchester City.

A second half brace from Brighton’s Inessa Kaagman sealed the win on Sunday for the Seagulls.

Believe it or not, the woodwork played a significant role in the match. Just minutes before Kaagman’s first goal, Spurs’ Shelina Zadorsky hit the crossbar with a header. Then, just a minute after Kaagman’s second goal, Spurs came close again, when Siri Worm hit the post off of a corner.

The last ten minutes of the match featured two hits off the crossbar for Brighton, and and another for Spurs, but no more goals were in store.

You could call this one unlucky, but Spurs have now lost their last four matches, and they sit in 8th.

This time @InessaKaagman scores with a right-footed finish that's every bit as good as her first goal. 👏#BarclaysFAWSL pic.twitter.com/5xASzfT7zK

Monday’s dramatic 3-2 win for Bristol City over Reading moved Bristol out of the WSL relegation zone – although West Ham, who currently hold the bottom spot, have a game in hand.

It was a back and forth affair, as Reading’s Emma Harries struck first in the 13th minute, but Charlie Wellings leveled things just ten minutes later for Bristol.

In the second half, Jemma Purfield put Bristol ahead with a magnificent, bending strike that tricked Reading keeper Grace Moloney. Shortly after, the game was level again, as Reading’s Rachel Rowe equalized with a beautiful strike of her own.

But it was recent England call-up Ebony Salmon that sealed the deal for Bristol with a late winner in the 79th minute. She made a great run on the wing to lose her defender, and received a perfect diagonal ball from Abi Harrison. Salmon’s finish in the bottom right corner was clinical, and she celebrated with a shush and a smile.

Despite being down 10 players for a majority of the match – and conceding two penalty kicks – Chelsea showed their quality midweek, as they managed to defeat Atlético Madrid by two goals to nil in the first leg of the Champions League Round of 16. Two penalty saves by Ann-Katrin Berger, and goals by Maren Mjelde and Fran Kirby sealed the win.

Goals by Lauren Hemp and Ellen White in the 2nd and 4th minutes respectively, and a third in the 89th minute by Sam Mewis sealed the 3-0 win for Manchester City over Fiorentina.

The case for Katie McCabe as an elite fullback
W-League Review: Adelaide upsets Sydney, while Brisbane loses for the first time