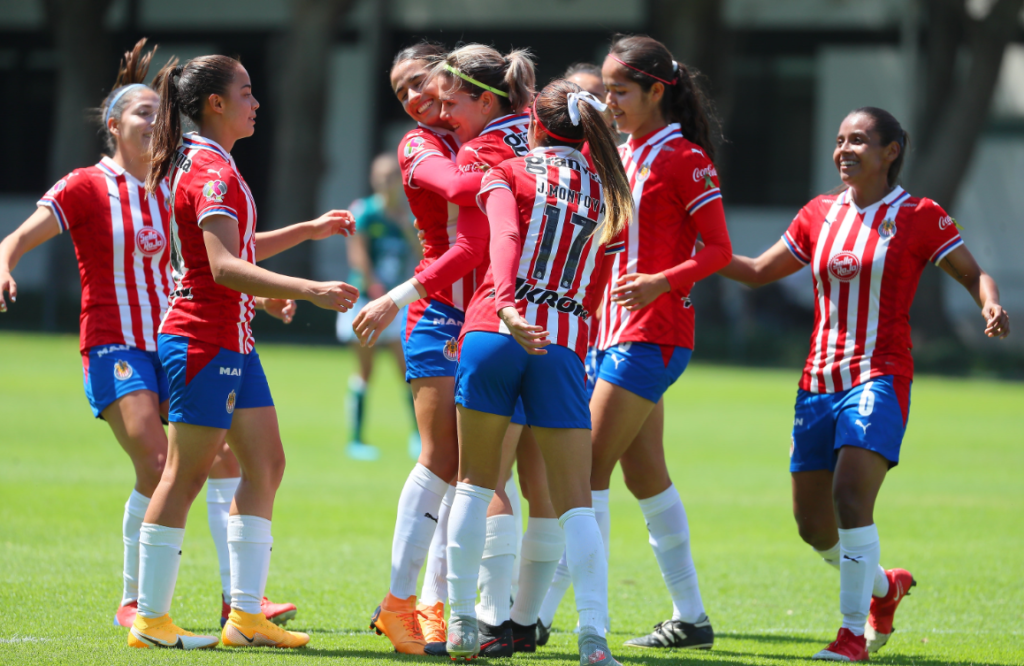 Liga MX Femenil took a break due to two international friendlies with the Mexican women’s national team taking on Costa Rica. However, competition returned this past weekend and a new team has landed in the No. 1 spot. There’s plenty of competition left in the Clausura, though.

Of note, Santos Laguna and Puebla made up their Week 1 match on Feb. 22, ending in a scoreless draw. The match was postponed due to positive COVID-19 cases around the Santos Laguna club.

In Week 8, Chivas got a big win, Atlas jumped to the top and plenty of draws took place.

Club América picked up a massive three points over Pumas. It was an upset victory, but Pumas was the first on the scoresheet. Liliana Rodriguez, from outside the penalty area, smashed the ball into the upper left of the net, giving Pumas the lead on the road.

However, early in the second half, Pumas derailed. Edna Santamaria sent the ball into her net and past teammate Melany Villeda for an own goal. Two minutes later, Daniela Espinosa, who was with the Mexican women’s team, scored inside the box, picking up a rebound from her teammate.

Three minutes after the Espinosa goal, Dorian Hernández edged out her defender, Deneva Cagigas, and slipped her shot between goalkeeper Villeda and the post.

With the win, Club América jumped up to sixth place, while Pumas dropped from first to fourth place.

Chances were slim in the meeting between Cruz Azul and Tijuana on Friday. Cruz Azul registered the lone shot on goal, while Tijuana mustered for chances. Needless to say, goalkeepers Karla Morales and Itzel Gonzalez weren’t too busy in net.

Who can stop Alison Gonzalez? Nobody, and definitely not Mazatlán. While Saturday’s match finished in a draw, Gonzalez scored two goals to bring her season total to 11 goals, leading the entire league. The next player behind her is Katty Martinez of Tigres with seven goals. Gonzalez has a good cushion, and she shows no sign of slowing down.

Gonzalez scored in the 11th and 61st minutes. Her first goal was on a penalty kick, while the second was courtesy of Gonzalez out-running her defender and using her left to get the shot off.

However, the first goal of the match went to Mazatlán midfielder Casandra Montero, as she intercepted a pass from Atlas goalkeeper Ana Paz and shot into the empty net. After Gonzalez’ first goal, Mazatlán took the lead back courtesy of Melisa Ramos taking a shot inside the box.

Toward the bottom of the table, Atlético de San Luis is doing what they can to stay away from last place. The cushion isn’t much, but a draw with FC Juárez gave San Luis five points on the chart. Juárez has the same amount, but is a little bit higher on the table due to goal differential.

Silvia Elicerio put the home side on the board in the 20th minute, with the striker scoring a penalty kick for Juárez. The home side thought they had all three points wrapped up, but a 90th minute goal from San Luis forward Daniela Carrandi scoring on a penalty kick as well.

It was a rough day on the road for Club Leon, but a great day for Chivas de Guadalajara.

Alicia Cervantes netted a hat-trick with goals in the 10th, 40th and 71st minutes. Her second goal was a penalty kick past Leon goalkeeper María Martínez and her third tally was a header slammed right into net. Isabella Gutiérrez scored in the 42nd minute for Chivas off a poor clearance while Anette Vázquez tacked on the fifth goal with a tap inside the box.

Daniela Calderón did prevent a Chivas clean sheet in the 80th minute, scoring off a corner kick. The five goals will help Chivas down the road, but right now the team sits in third place behind Atlas and Tigres.

It’s been a rough ride for Puebla during this Liga MX Femenil season. After facing off with Santos Laguna in a make-up match, Puebla stayed home to host Querétaro. The visitors picked up the win, courtesy of a Lizette Rodríguez goal in the 46th minute. Rodriguez scored on a high hit toward the upper right corner of the net.

Tigres took three points at home against Toluca on Monday, courtesy of some well-known Mexican women’s national team stars and their goals. Maria Sanchez and Stephany Mayor found the back of the net for Tigres, fresh off their performances under Monica Vergara for Mexico.

Sanchez scored the opening goal in the 19th minute minute after finding herself wide open toward the edge of the goal area. She called for the ball and Katty Martinez swung it over for the one-touch goal. Meanwhile, Mayor’s goal came in the second half off a rebound from Nancy Antonio’s attempt.

Tigres remains high on the table in second place, while Toluca has fallen to seventh after a strong start.

Monterrey took a huge hammer to getting to first place with a loss on the road to Pachuca. Viridiana Salazar scored on a cut and run attempt, making the defender slip and miss her mark. Salazar aimed for the right post, while Monterrey goalkeeper Mariana Caballero dove the other way.

Pachuca has jumped up to eighth place, while Monterrey took a tumble to fifth place.

After drawing at home in a make-up match with Puebla, Santos Laguna remained at home and hosted last-place Necaxa. Isela Ojeda scored the opening goal in the 22nd minute, but Necaxa quickly equalized in the 35th minute, courtesy of Fanny Grano. Right before the halftime whistle blew, Esmeralda Zamarron gave Santos the lead on a footrace with her defender.

However, Necaxa ended up splitting the points with Santos. Stephanie Baz scored in the 70th minute, shooting from outside the penalty area and cutting between two defenders. Her shot was hit by goalkeeper Wendy Toledo, but bounced back into net.

Necaxa is still in last place, but the points will provide some confidence.

UWCL round of 16 preview: Tales of the tape
The case for Katie McCabe as an elite fullback