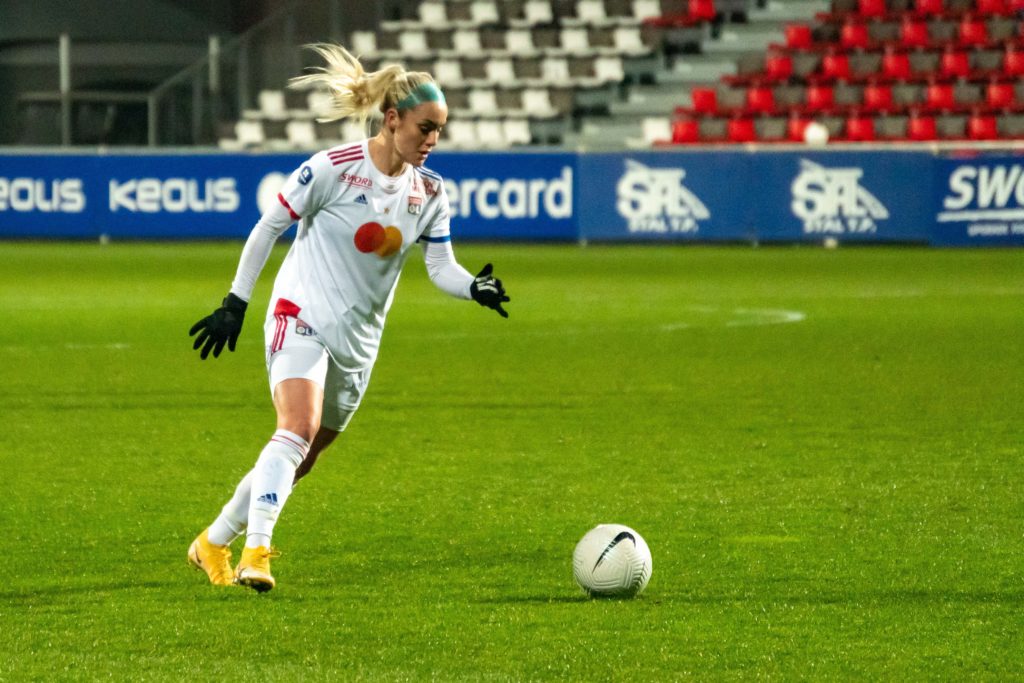 The long-awaited showdown between Lyon and Paris Saint-Germain is now less than two weeks away and neither team will play another league match until then. Over in Spain, Levante are continuing to hold off the Madrid powers for second place. Domestically, the NCAA spring season is heating up. Scroll down for all the latest regarding how the college draft picks have performed over the last two weeks.

The Latest: The countdown is on ahead of the March 13 showdown in Lyon between the 14-time champions and rivals Paris Saint-Germain. PSG won in Paris in November and can take firm command of the race with a draw on the road. Neither team will play in the league until then. Lyon will face Brøndby in Champions League play this week and next. PSG are drawn against Sparta Prague but that tie begins March 10 and will conclude March 17 after the Lyon match.

The Latest: Sam Mewis, who missed the SheBelieves Cup due to a minor injury, returned with a pair of goals for Manchester City, who drubbed Birmingham City 4-0 away. There were only two other matches Sunday. Arsenal won 4-0 at Aston Villa and Everton beat Tottenham 3-2 away after surrendering an early 2-0 lead.

The Latest: Barcelona kept rolling with a 3-0 away win over Eibar and it seems only a catastrophe will keep them from the title. The battle for the other two Champions League spots is much tighter with Levante trying to stave off the Madrid sides for second. On Sunday in Huelva, Levante fell behind 1-0 in the 2nd minute and trailed for the next 86 against a side fighting to stay over the relegation zone. In the 88th Maria Mendez delivered an equalizer and Esther Gonzalez won it for Levante in the 90th.

Alanna Cook played the full 90 for Paris Saint-Germain, 4-0 winners over Issy…Ellie Carpenter (Thorns, rights) went all the way for Lyon who got by Soyaux, 2-0. Neither Catarina Macario nor Jodie Taylor (Pride, rights) were in the 18 for Lyon. Macario was still quarantining after returning from the SheBelieves Cup.

Jada Talley (Louisville, rights) had a goal and an assist to help Arizona defeat Northern Arizona 3-0. Five days later she played nearly 80 minutes in a 2-1 loss to UCLA. Jill Aguilera (Red Stars, rights) assisted on the goal against UCLA after not seeing the field against Northern Arizona… Haley VanFossen (Red Stars, rights) had a pair of assists in Arnkansas’ 7-0 route of Missouri State and played the entire match against St Louis, a 3-1 loss. Taylor Malham (Louisville, rights) had an assist against Missouri State and was not available for the St Louis match. Parker Goins (Louisville, rights) had a goal and an assist against Missouri State and netted the only goal against St Louis… Alyssa Malonson (Courage) had a busy week going 77 minutes in Auburn’s 5-0 win over Kenesaw State and 99 minutes in an overtime draw (0-0) with LSU… Mikayla Colohan (Pride) played a total of 181 minutes in two matches for BYU and notched a goal and assist in a 3-2 win over San Francisco… Channing Foster (Red Stars) scored the only goal with a left-footed smash to carry Ole Miss over Samford, 1-0… Samantha Coffey (Thorns) had a goal and two assists against Northwestern and a goal against Illinois. She also played 90 minutes in a loss to Rutgers… Joelle Anderson (Dash) saw action in two matches for Pepperdine… Amirah Ali (Thorns) hit the equalizer and the winner in Rutgers’ win over Penn State. She also featured in a loss to Indiana a win over Purdue… Kelsey Turnbow (Red Stars) scored an olimpico to help Santa Clara beat University of Portland, 2-0. Alex Loera (Kansas City) played all 90 for Santa Clara… Kiki Pickett (Kansas City) played three full 90s for Stanford but the Cardinal were upset twice, once each by Oregon and Oregon State. Before that they defeated Pepperdine. Madison Haley (Red Stars) saw time in all three matches for Stanford… Delanie Sheehan (Sky Blue) scored for UCLA against Arizona and was on for most of a victory over San Diego. Lucy Parker (Kansas City) played the full 90 in both matches. Karina Rodriguez (Spirit, rights) did not play for UCLA as she was busy making her senior international debut for Mexico. Viviana Villacorta (Pride) has a torn ACL… Emily Smith (Louisville) played 90 minutes for Cal in a 3-1 win over Oregon State but was not available two days later against Oregon… Kaylie Collins (Pride) allowed three goals but got the win when USC got by BYU, 4-3 in overtime. Tara McKeown (Spirit) scored two of those regulation goals including one from the spot… Taryn Torres (Sky Blue) played 78 minutes in Virginia’s 2-0 win over George Mason… Makamae Gomera-Stevens (Dash) saw extensive action in three recent matches for Washington State, all shutouts. Brianna Alger (Red Stars) is injured and has not played… Jimena Lopez (Reign, rights) played 82 minutes for Eibar in Spain against unbeaten league leaders Barcelona.

W-League Review: Adelaide takes sole possession of third with win in Newcastle
UWCL round of 16 preview: Tales of the tape