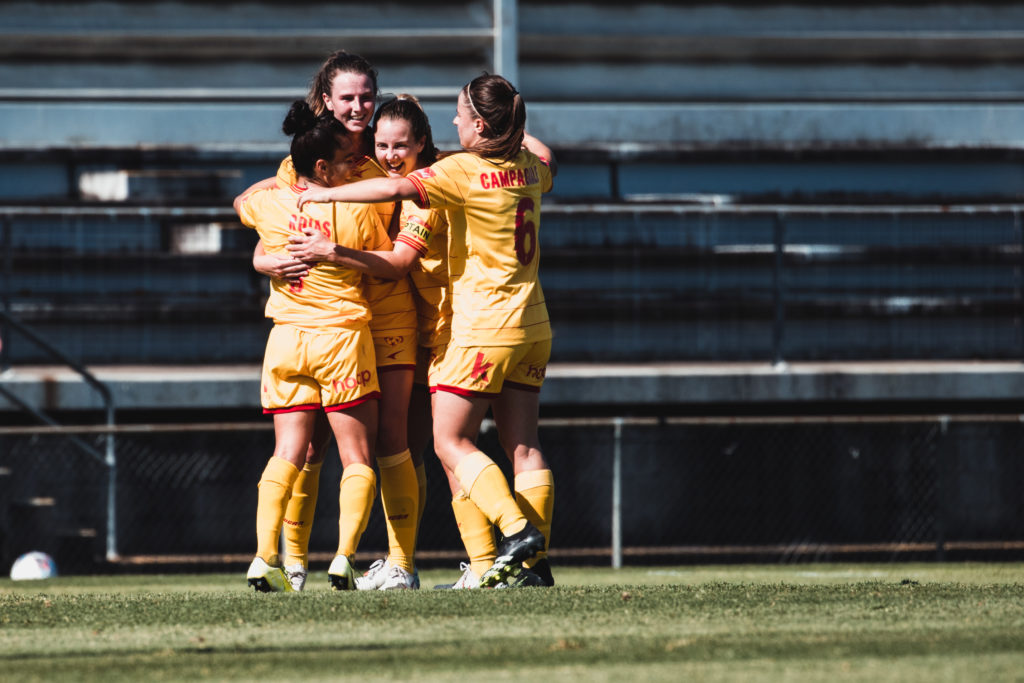 With a victory in Newcastle, Adelaide United has taken sole possession of third place in the Westfield W-League. Also, Melbourne Victory and Canberra drew in crucial match with playoff implications. We have you covered with an update from Australia.

Adelaide United left New South Wales with a vital three points after defeating Newcastle Jets 2-1 on Feb. 26 to continue their quest for their first ever W-League playoff berth in 13 seasons. With the win, Adelaide recorded a record tying fifth win in a season, even with their previous best from 2018-19. All the scoring came in a three minute flurry early in the game, with Adelaide’s Emily Condon scoring her fourth goal of the season and the winner in the 15th minute.

Adelaide’s Chelsie Dawber opened the scoring with her third goal in 2020-21 in the 12th minute from a long shot at the top of the box, which a diving Clare Coelho could only get a fingertip to.

The Adelaide opening strike was quickly countered by Jets defender Gema Simon’s second of the season a minute later on an equally stellar effort from far out on the left side of the box, curling her shot from distance around Adelaide goalkeeper Sian McLaren.

The sides were quite even for possession, with the Jets having a slight advantage over the Reds (52% vs. 48%), as well as for shots (14 vs. 13), though Adelaide was more clinical with six shots on target compared with two for Newcastle. Newcastle attracted 652 fans, the highest total of the round in a season where attendances around the league have been suppressed from recent campaigns because of COVID.

.@gema_simon7 with a captain's goal 👏

Western Sydney Wanderers won their second game in a row — with both from a single goal — as Leena Khamis scored her first goal of the season in the 72nd minute to give the home side the three points in a 1-0 win over Melbourne City on Feb. 25. The Wanderers remain in the picture for a second consecutive playoff berth, though they will have to do it the hard way as they have no more home games left to play.

Khamis came on as a substitute only six minutes before her goal to replace Irish international Julie-Ann Russell. The creator of Khamis’ chance came was Teigan Collister, who made a absolutely brilliant run down the right side of the field from her own half to the edge of the penalty box, taking on Matilda central defender Emma Checker in the process before feeding a pass to the veteran striker, who scored from near the penalty spot. Khamis now has 45 W-League goals in 125 matches for fifth among all-time scorers; she is a W-League original from the first season (2008-09) when she played for Sydney FC.

.@Leena_Khamis off the bench and onto the scoresheet! 💥

Former NWSL player and American import Sam Johnson played more as an attacking midfielder for Melbourne City in this game than in her usually wing back role and was denied a few minutes of a goal before halftime by a clearance on the line from Nikola Orgill, after Wanderers goalkeeper Sarah Willacy completely missed an attempted clearance on Johnson at the edge of the penalty area and fell over, leaving Johnson with an clear path and shot at the goal.

For Melbourne City, their nightmare season continues. They have surrendered a league leading 18 goals—their previous high was 15 goals allowed in both the 2017-18 and 2018-19 seasons, while last season they only allowed four. They have only scored seven times this season — their lowest previous total was 19 in 2016-17 compared with a club record 28 in 2015-16.

Braces galore came on Feb. 25 in Perth as Sydney FC won handedly 6-2 over the Perth Glory. Remy Siemsen, Princess Ibini and Clare Wheeler each scored two goals for Sydney while Hana Lowry did the same for Perth.

Siemsen’s double moved her to second in the league goal scoring table with seven behind Emily Gielnik (Brisbane Roar), who has eight. Ibini now has four goals in 2020-21, with two doubles. Clare Wheeler, a former Australian U-20 international, scored her first goals in the W-League after 74 games. She previously played seven seasons with the Newcastle Jets.

.@princessibini_ with the turn and finish! 🔄

For Perth, in a two minute spell just after the hour mark, 17-year-old Hana Lowry doubled Perth’s scoring output for the season with her two goals. The Australian U-17 international had one goal last season in seven games with the Glory.

Sydney led the Glory in possession (56% vs. 44%), shots (30 vs. 6), shots on goal (11 vs. 3) and corners (12 vs. 0); Sydney FC has been dangerous from corners all season with captain Teresa Polias usually taking them. The one downside of the game was that Ellie Brush had to leave with only a few minutes left with a knee injury. The former Houston Dash player in 2015 and 2016 had been having a strong season for the Sky Blues and was receiving support as a possible recall candidate for the national team after a long absence dating back to 2012.

With Adelaide United’s win two days before propelling them into sole possession of third place, Melbourne Victory’s home match against Canberra United — fourth place versus fifth — became the key match of the Round with huge playoff implications. The teams shared the points after a 1-1 draw on Feb. 28.

Wing back Angie Beard scored her first goal of the season in the ninth minute on a long shot from the left wing that touched the cross bar and surprisingly eluded Canberra keeper Keeley Richards, with American defender Kayla Morrison providing the assist. Beard scored one goal this summer in ten games for KR of Iceland in her first stint abroad; KR was relegated after finishing last in the 10 team Urvalsdield league and will play in the second tier 1. Deild Women in 2021, with Beard likely to return to play somewhere in Europe this season.

Canberra forward Nicki Flannery scored the equalizer in the 47th minute. Flannery broke clear of her defenders, calling for and receiving a pass from Bianca Galic and continued on towards goal, where she slotted a grass-cutter into a narrow slot to the left of Melbourne Victory keeper Gaby Garton.

Richards made an outstanding save in the 90th minute on a close range shot in the box from New Zealand international Annalie Longo, who came on as a substitute for Kyra Cooney-Cross in the 60th minute, to keep Canberra even with the Victory on the scoreboard. Unfortunately Victory’s leading scorer American Cat Zimmerman was substituted just before halftime as a precaution after a knock after she expressed concerns about her Achilles. The Victory coaching staff and players surely hope she can return quickly.

Nikki Flannery comes up with the goods for @CanberraUnited to equalise it!

The draw could end up being more damaging to Canberra’s prospects regarding the playoff picture. Both sides have a game in hand over third place Adelaide but Victory are only two points adrift of third and remain in the top four, while Canberra is two points behind Melbourne with an inferior goal definition. Flannery’s winner was crucial in the game but the Greens need another couple of wins in the remaining weeks in the push for their first playoff berth in four seasons.

Emily Condon scored the winner in Adelaide’s crucial win over Newcastle Jets but she did so much more in the game, finishing with a 100% passing efficiency on 29 passes, providing three crosses, scoring on her only shot and winning six of eight duels. Condon appeared once for the Matildas in 2018 at the Algarve Cup in Portugal. She is in her seventh W-League season, all with Adelaide, and has 69 appearances in her career.

This is the Westfield #WLeague ladder presented by Bunnings pic.twitter.com/GHP1AZpLcc