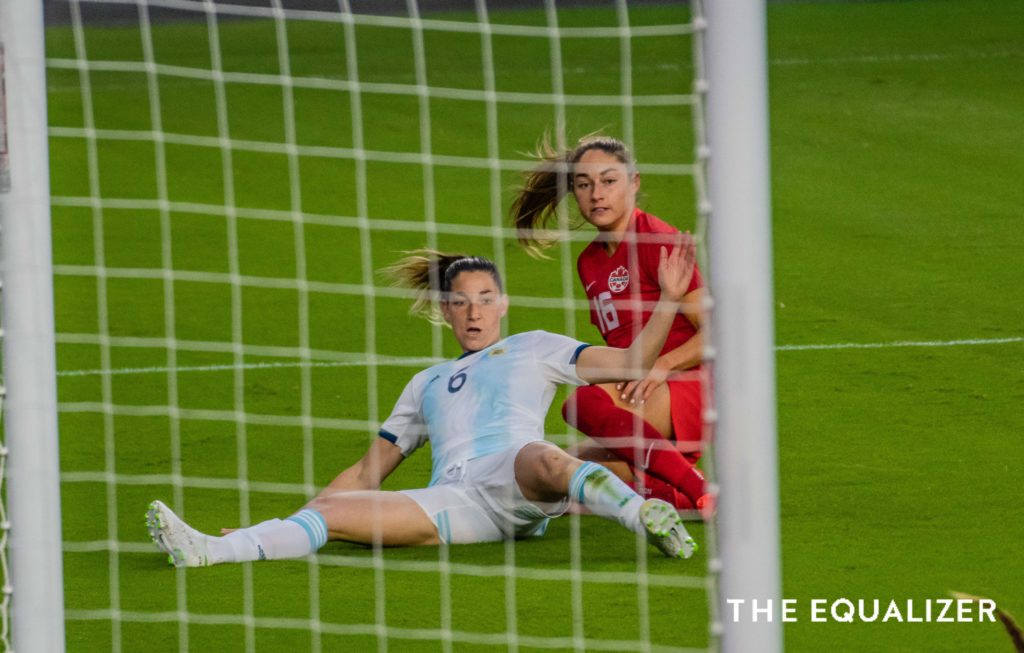 The broken record surrounding Canada’s women’s national team for the past two years is the team’s inability to score timely goals. Excuse the proverbial kicking of a dead horse, because Canada’s finishing in the final third was once again poor during February’s SheBelieves Cup.

The greatest hockey player to ever lace up a pair of skates, Wayne Gretzky once said, “You miss 100 percent of the shots you don’t take.” In this case, Canada is missing glorious shooting opportunities in front goal, and it’s not a new problem. Canada is a team which prides itself on being able to compete with the best in the world, and yet a wastefulness in front of the net consistently prevents that from happening.

You have to go back to April 5, 2019, to find the last match in which Canada defeated a top-10 team in the world: a 1-0 win over England. Since then, Canada has an underwhelming record of 0-8-2 against tier-one opposition. In that span, Canada has been kept off the scoresheet in eight of those 10 matches. The list of fixtures includes Brazil, the U.S., France, Japan, Sweden, and the Netherlands.

All but France are all teams which Canada could end up facing at this summer’s Olympics. In the last two years, Christine Sinclair, Janine Beckie, and Diana Matheson are the only Canadians who have scored for Canada against a top-10 team.

Diving further into Canada’s plummeting offensive woes, Canada has scored three goals in the last seven total games. Not only do missed scoring chances hurt the confidence of the team’s attacking forwards, but they also put immense pressure on the rest of the team.

Since Bev Priestman has been in charge, the players have spoken about how the team wants to change the color of the medal at the Tokyo Olympics. If Canada is going to improve from two bronze-medal finishes at the 2012 and 2016 Olympics, they are going to need to figure out how to finish in the final third. Where are the goals going to come from?

“As a forward, it’s frustrating to look at this tournament and see that we only put one chance away,” Janine Beckie explained to reporters following Canada’s 2-0 loss to Brazil to end the competition. “As a forward, obviously I take that on my back, along with the other players who play in the front line. I think the positive is that we’re creating those chances. If I’m honest, we’ve been saying that for a while, and we’ve not shifted to putting those chances in the goal. Yeah, I don’t know what the answer is right now.

“I think time together is helpful, which is difficult right now. We weren’t together for a year, to put those performances together after being away for so long, is a nice positive. Yeah, there’s absolutely no doubt that we need to be putting the ball in the back of the net and that was very evident in this tournament.”

The Manchester City striker also went ahead and took ownership for her missed chances following Canada’s tournament-opening, 1-0 loss to the United States.

Proud of this team & the fight we had last night. I own the chances missed, there’s no excuse. Get up & we go again 💪🏼 pic.twitter.com/qmvTT5hPYu

If Canada is going to try and solve the empty void of converting goals, they will have to do so from within. There isn’t a transfer that can be made; there’s no market to acquire a top goal-scorer from across the pond. Having Sinclair healthy and back in the mix will certainly help. It’s finding a supporting cast who can assist Sinclair that will be key for Canada’s medal aspirations.

Paris Saint-Germain’s Jordyn Huitema is expected to be back when Canada is next in action on April 13 against the Lionesses. Huitema could be another option up front for Canada. The familiar faces of Beckie, Nichelle Prince, Adriana Leon, Deanne Rose, and Jessie Fleming have combined for 93 senior international goals. That’s half of the goals Sinclair (186) has scored in her 296 appearances with Canada. Veterans Sophie Schmidt and Matheson have 408 combined caps and have each scored 19 goals for Canada.

The 26-year-old Beckie has scored 31 goals for Canada and she has the skillset to be the team’s next go-to scorer. Whether it’s confidence, or an adjustment to Canada’s 4-3-3 formation, or moving Beckie inside the box from her position of taking Canada’s corners and free kicks, something needs a tweak. Not having consistent playing time with her club team isn’t helping, either.

“I’m frustrated with my performances over three games,” Beckie added. “There was definitely goals that were left on the table and I have taken ownership of that. I know that my finishing has to be better. I think that comes down to getting myself in the right positions. That’s the difference between good and great players, it’s players that are able to finish that opportunities. I’m proud of the physical shift that I was able to put in. It was the first time that I’ve played three ninety back to backs in a while, but yeah, a lot of things to work on to get into those positions to make things happen. This team needs me to score goals, and I unfortunately didn’t do that in this tournament, so I’ll take that on my back.”

Canada scored four goals in four matches at the 2019 FIFA World Cup and that contributed to an early exit in the round of 16. If the offense cannot improve over the next five months, it could be another surprise ouster for Canada on the world stage.

Pia Sundhage’s joy could be her legacy in Brazil