FAWSL Week 17 Roundup: Sam Mewis is back with a brace for City 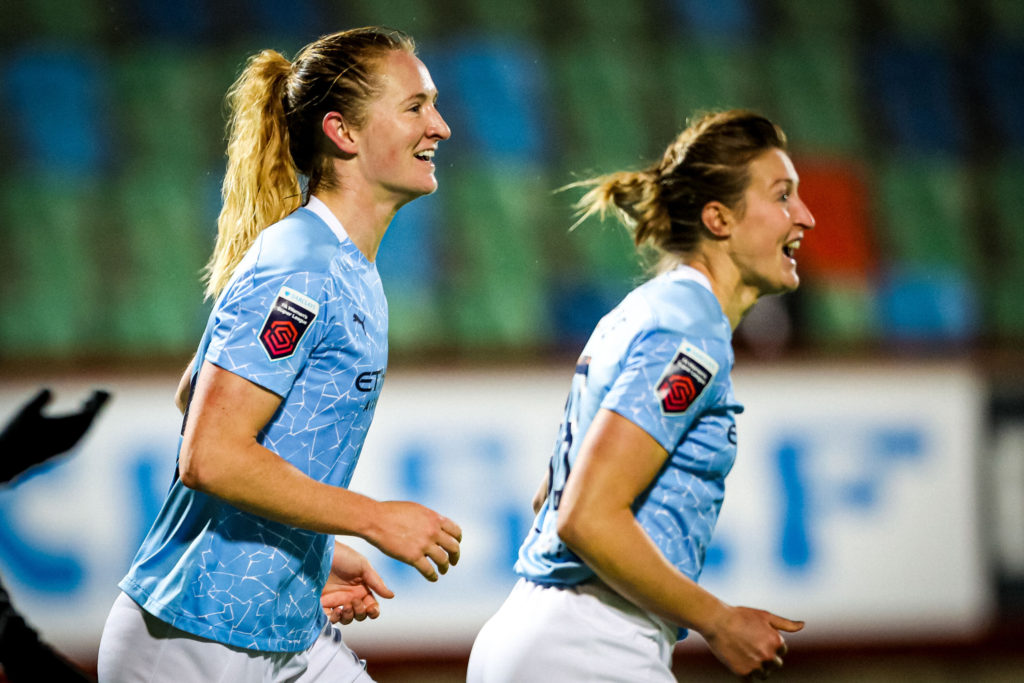 Though it was a quiet weekend in the Women’s Super League, the goals were flowing in the three matches played on Sunday. Manchester City earned a swift win over Birmingham City, while Arsenal got back on track with their first WSL win of 2021. And holding off a lively Spurs squad, Everton were able to come away with a win of their own. Read on for this weekend’s WSL news!

📊 How the #BarclaysFAWSL table looks after today's games 👇 pic.twitter.com/j6AcMOOO9z

Sam Mewis returned to the Manchester City starting eleven on Sunday after being out for a month with an ankle injury. She marked her return with two goals and an assist, sparking her team to three points over Birmingham City. Lauren Hemp and Caroline Weir rounded out the scoring for the 4-0 win.

Things we love to see 🤩@sammymewy 🔙 at it again with a brace for @ManCityUS! pic.twitter.com/AO1qN4G9RQ

Hot off the heels of another SheBelieves Cup win with the U.S., Rose Lavelle and Abby Dahlkemper were late second half substitutes for City. Lavelle hit the crossbar in her short time on the pitch.

The much awaited matchup between Arsenal and Aston Villa – really, it was postponed three times over the course of the season – finally was played on Sunday, and a 4-0 win meant Arsenal broke their three game winless streak.

But patience was required, as Aston Villa’s solid defending kept the score even for nearly an hour. The Gunners finally found their breakthrough in the 58th minute, when Vivianne Miedema timed her run perfectly and got her foot on the end of a Beth Mead cross.

The floodgates opened after the opener, as Jordan Nobbs, Katie McCabe, and Lisa Evans added three more for Arsenal to secure the win. McCabe’s strike, Arsenal’s third of the day, was quite the sight to behold:

An absolute rocket by Katie McCabe to put Arsenal up 3-0 over Aston Villa! 🚀 pic.twitter.com/tinLxo5sC4

With the win, Arsenal (26 points) inch closer to Manchester United, who sit in third place (32 points).

Though Spurs came from behind to tie things the second half, Everton were able to score a third and earn all three points on Sunday.

Everton pulled out in front early, as Valerie Gauvin buried two penalty kick goals in the first 20 minutes of the match. Then Spurs, through goals by Angela Addison and Gemma Davison, levelled things at two all. But it was Jill Scott that provided the winner for the Toffees – her first goal since re-joining Everton from City in January. The Lionesses midfielder was able to get her head on a corner kick in the 61st minute, and flick the ball past a sea of Spurs defenders for the fairy-tale finish.

What a week for @JillScottJS8! 🙌

The @Lionesses midfielder scores her first goal for @EvertonWomen since rejoining the club in January! #BarclaysFAWSL pic.twitter.com/H9QV5ljKew

Everton (currently in 5th) are four points behind Arsenal in the table.

WSL clubs in the Champions League Round of 16 this week:

Who is England’s best striker? The answer might not be so simple