‘The story of our lives right now’: Defensively sound Canada trying to figure out their attack 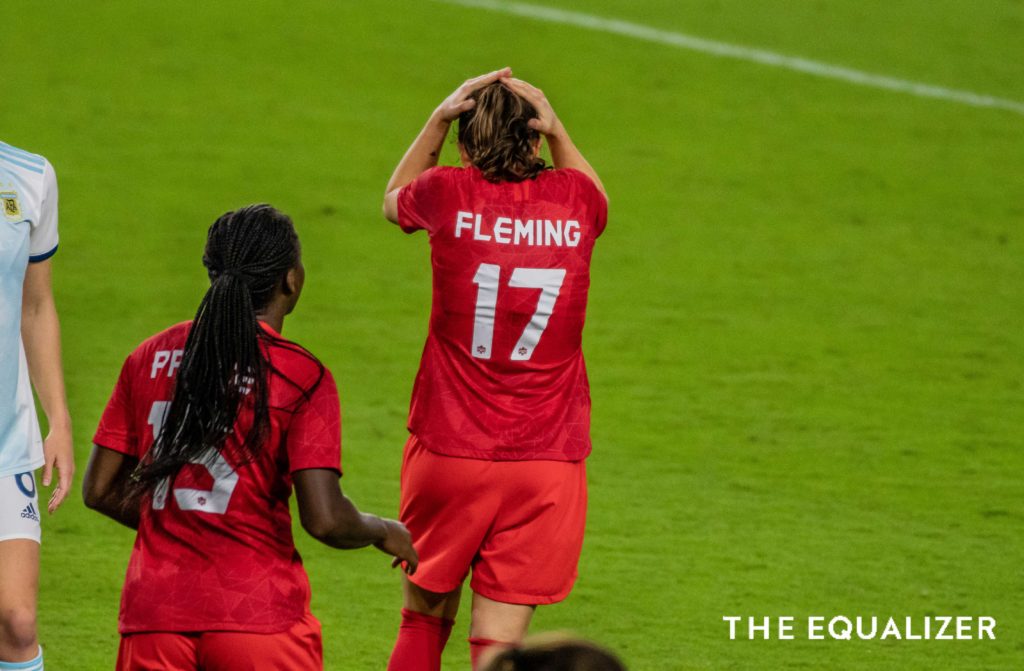 Canada earned their first victory at the SheBelieves Cup on Sunday thanks to a stoppage-time winner from Sarah Stratigakis. The 1-0 win over Argentina came after Stratigakis poked the ball home after a wild scramble inside the Argentina box.

It was the 21-year-old’s first goal for Canada in just her third cap, after coming on as a substitute. The victory was also Bev Priestman’s first as Canada’s head coach, and it was far from a Piccaso-level work of art. The team that looked cohesive and locked in against the United States on Thursday played disjoined and sloppy against a less-heralded Argentina on Sunday. Canada’s timing was off, the passes were not connecting, and possession was often wasted.

Part of that could be due to the six changes to the starting lineup. Maybe it was the three-day turnaround between matches. But for a team looking to compete for another medal at this summer’s Olympics, there will need to be more offensive production than a 92nd-minute goal. Canada’s finishing in the final third remains something to be desired, an issue which predates Priestman’s tenure of the long layoff due to the pandemic.

Sarah Stratigakis finds the back of the net to give @CanadaSoccerEN the lead in the 92nd minute 🇨🇦 pic.twitter.com/jD2YSkEqn6

Jessie Fleming had the best chance of the first half when a deflected ball from Adriana Leon found her in front of goal. The Chelsea midfielder completely missed the net. Leon, Janine Beckie, and Nichelle Prince created chances, but also failed to convert. Despite the familiar issue, Canada still had a belief that they would eventually score.

“One hundred percent thought the goal was coming,” midfielder Sophie Schmidt told reporters after the match. “We were attacking, we should have put some away in the first half, but we didn’t. That’s the story of our lives right now. We need to find a way. You could feel it on the field. We did a good job of staying calm even though they had 11, 12 players back in their box, and they were going down with the slightest touch. We kept our cool and knew that we had to get the job done and we did. Kudos to us.”

Argentina, which is ranked No. 31 in the world, was content to sit back and absorb Canada’s possession and crosses to nowhere. The defensive block is a common tactic deployed by teams taking on more talented opponents, and it is one which Canada is not well-suited to face.

Canada’s scoring opportunities against the U.S. were created in the transition game, but against Argentina, those didn’t exist. Instead, Argentina looked to counter and invited Canada to attack, asking questions of Canada’s open-play buildup.

“I’ve experienced it at the youth level, they are always tough games,” Priestman said. “They feel in control, they’re waiting for you to give the ball away and counterattack. I think we put a lot of emphasis on that because I knew they would be sitting in ready to break on us. What I was really pleased with was we kept that clean sheet with some of the realties on the pitch.

“Yeah, I think we have to break down that block and move the ball quicker. Overall, that’s something we’ve been trying to work on regardless of whether it’s beating the block or not. We need to move that ball quicker, take less touches to find the forward pass. In elements and moments of the game we did it. I would have like to have seen us do it more in that game, it wasn’t everything the players dreamed of. It wasn’t everything I dreamed of, but we found a way to win and that’s the most important thing.”

An international tournament during a pandemic? How a ‘small but mighty’ events team is making it happen safely

Canada’s first two matches at the SheBelieves Cup have shown that there is still significant room for improvement offensively. The strong play of the defense has been a huge positive, especially without Kadeisha Buchanan available.

Wednesday’s SheBelieves Cup finale presents a different challenge entirely. Brazil is a creative team known for breaking down opponents, but under head coach Pia Sundhage, they have greatly improved defensively as well.

“They’re dangerous on the counterattack,” Priestman said of Brazil. “We have to put an emphasis on competing and being hard to beat. I think they have some threats for sure. They’re a tough team to play against, you only have to look the previous 18 months of Canada playing Brazil. It’s a tough match.”

Canada and Brazil played to a 2-2 draw in France in March 2020, with the Canadians erasing a 2-0 deficit late following a red card for Brazil. In November 2019, Brazil defeated Canada 4-0 in China during one of Sundhage’s early games in charge. That match came shortly after a 4-0 loss to Japan as part of Canada’s post-World Cup skid.

It appears that Brazil has improved since then, as evidenced by a strong but ultimately losing effort against the United States on Sunday.

“It’s a good opponent for us because we know we need to step up a little bit when it comes to the defense,” Sundhage said of Canada. “I think Canada had a good game against the U.S. I think you can tell in the defending, they are very tough and aggressive. We need to improve our speed of play, but also in the air. I think we are pretty good in the air, so that’ll be interesting to see how we do against the Canadians.”

Pia Sundhage’s joy could be her legacy in Brazil

SUBSCRIBE! START YOUR FREE, 7-DAY TRIAL TODAY AND GET 30% OFF YOUR FIRST YEAR BY CLICKING HERE. (NEW SUBSCRIBERS, LIMITED TIME ONLY)

Who is England’s best striker? The answer might not be so simple
W-League Review: Table-toppers Sydney FC bounce back and defeat Adelaide