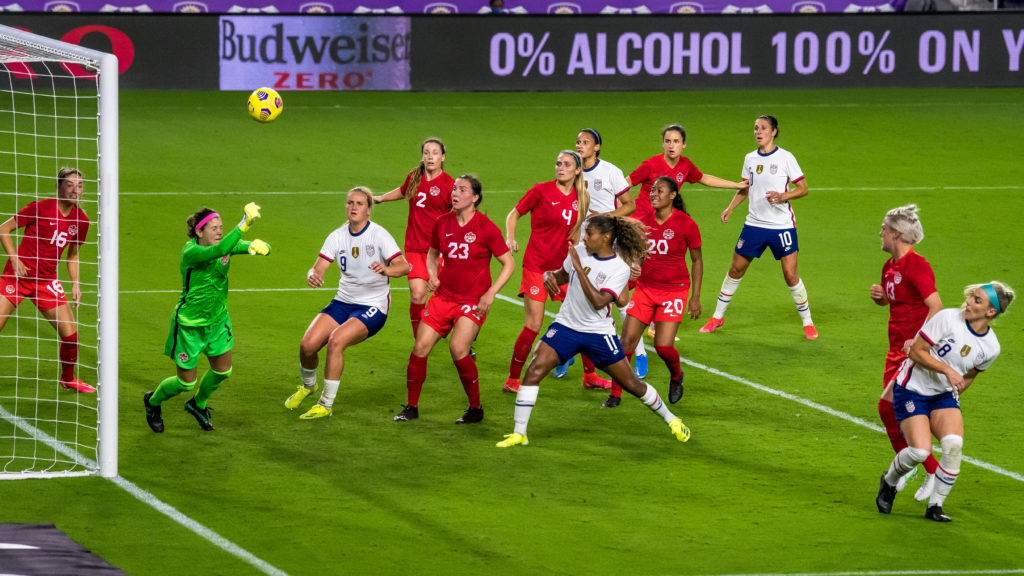 Canada returned to the pitch for the first time in a year on Thursday, taking the world No. 1 United States women’s national team toe to toe for 79 minutes. Bev Priestman called for bravery, confidence, and a sheer determination to defend in her first match as head coach. In the end, she got that — a gritty, organized, defensive effort which frustrated the Americans — and while the game was much closer than most would have expected given Canada’s many absences, the result was the same: a 1-0 victory for the United States.

The Americans now hold a commanding 51-3-7 record over Canada and are unbeaten against their rivals over the past 20 years. Despite the loss, Canada came away with significant positive developments.

Priestman rolled out a new look for Canada — both in personnel and setup. She ditched the more defensive 5-3-2 formation which Canada used against the U.S. in Olympic qualifying in January 2020 in favor of a 4-3-3 which clogged the middle of the park and nullified a talented U.S. midfield.

Canada’s backline played as a cohesive unit, with veteran Shelina Zadorsky pairing seamlessly with Vanessa Gilles, who had only featured for Canada twice prior to Thursday. Combined with their fullbacks, they kept a lethal U.S. attack from getting too many clear looks on goal. In the absence of Kadeisha Buchanan — who was withheld from release by her club, Lyon, as they chase a 15th straight French league title — Gilles was terrific, leading all players with 20 clearances. The positioning and quick reaction from the 24-year-old stymied the U.S. attack.

“I thought they were outstanding,” Priestman said of her center backs.

Access the best women’s soccer coverage all year long
Start your FREE, 7-day trial of The Equalizer Extra for industry-leading reporting and insight on the USWNT, NWSL and beyond.
Subscribe
Existing Users Sign In Here
Related Topics2021 SheBelieves CupBev PriestmanExtraFeatured