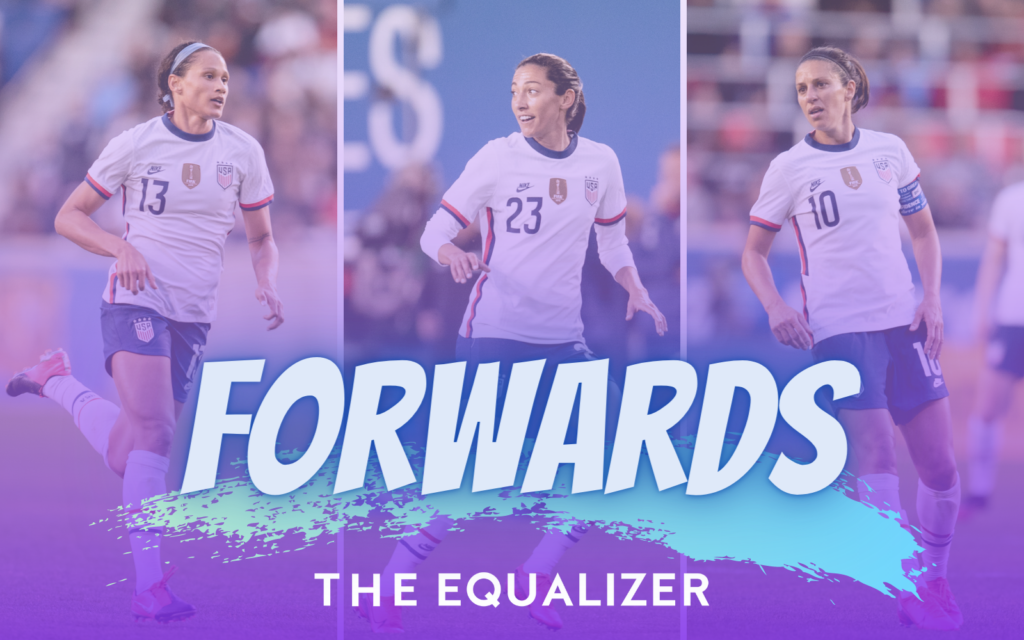 What does it mean to be a forward? I started thinking about this question last year before the world turned upside down and sports came to a halt.

The question was simple enough but rooted in the idea that the position we care about the most in soccer — goals make the game exciting, in the end — is much more complex than a single word. ‘Forward’ encompasses all sorts of vastly different players in significantly different roles. There are strikers, wingers, false nines, dual nines and even attacking midfielders who get grouped into the “forward” designation on team sheets but play behind the line.

Within those sub-positions, there are various types of players who find success by utilizing different skills. There are No. 9s who are physically dominant (think Abby Wambach) and those who can stretch a defensive line with speed and deception (think Alex Morgan). There are wingers like Tobin Heath, who never saw a 1-v-1 opportunity she did not like, and those who use exceptional speed in wide areas to create danger for defenses off the ball.

So, last year, I sat down with a few top American forwards to ask them: What does it mean to be a forward? It was a loaded, almost ludicrous question, but it sparked compelling discussions. Even within those conversations, it was clear how distinct but sometimes similar the approach is for several of the best forwards on the United States women’s national team and in the National Women’s Soccer League.

I want to be transparent about the timing of this series: I had conversations with a handful of players at the United States national team’s hotel in the suburbs of Orlando, Florida, last year. The goal was to publish this series as a preview to the Olympics. One week after these conversations took place, the sports world shut down and the Olympics were soon delayed a year due to the COVID-19 pandemic. I was unsure what to do with these interviews, given that the U.S. did not play for over eight months, and the Olympics felt like an impossible, distant idea for much of 2020. Each time we thought about running the series, it did not feel right. Something happened in the soccer world or with the pandemic or in my personal life.

Even today, there is skepticism that the Olympics will happen as (re-)planned this summer. What I know is this: I had some amazing, insightful conversations with players about how they approach the forward position, from their individual attributes, to how they train in the offseason, how they study film and who they look to for inspiration. Time has passed since our chats, but the fundamentals of the conversations have not changed (only a few games have even been played since). These conversations are about what makes each player successful.

Rather than wait any longer to bring you, The Equalizer Extra subscribers, these stories, we are running them ahead of the SheBelieves Cup, which we are pretty confident is actually going to take place at this point. I do not want to wait any longer for an Olympics that may or may not still happen, and I am confident that you, the reader, will benefit from the insight of these world-class players whether that competition takes place or not.

Over the next few days, we will bring you inside the minds of Lynn Williams, Carli Lloyd and Christen Press to give you an idea of how they approach the position, and what they’ve learned throughout their careers. No, these conversations did not take place yesterday or even last week. They did take place in a training camp and with an Olympics on the horizon, much like the situation the team and these players find themselves in today.

I am excited to bring you these exclusive stories, and I cannot wait for you to read them. If you are a subscriber to The Equalizer Extra, thank you. We are able to tell these stories, even in a virtual world, because of your support. You are getting complete access to this content through your subscription.

If you have not yet subscribed, now is the perfect time. We have a jam-packed content calendar for the SheBelieves Cup, including exclusive features on the United States team on and off the field, plus a big feature on Brazil. We are firing up our National Women’s Soccer League coverage with the league in preseason (much more to come, like this in-depth look at the new Kansas City team), and we are the most comprehensive outlet covering the league.

I highly encourage you to start your FREE, 7-day trial now and see what kind of great content you will get. Use the code “forward” to take 30% OFF your first year of annual subscription. I’ll make it easy for you with a direct link to subscribe with the discount already applied. Thank you for reading. Enjoy!

The Equalizer Podcast: SheBelieves, NWSL
Lynn Williams is the goal-scorer who also defends