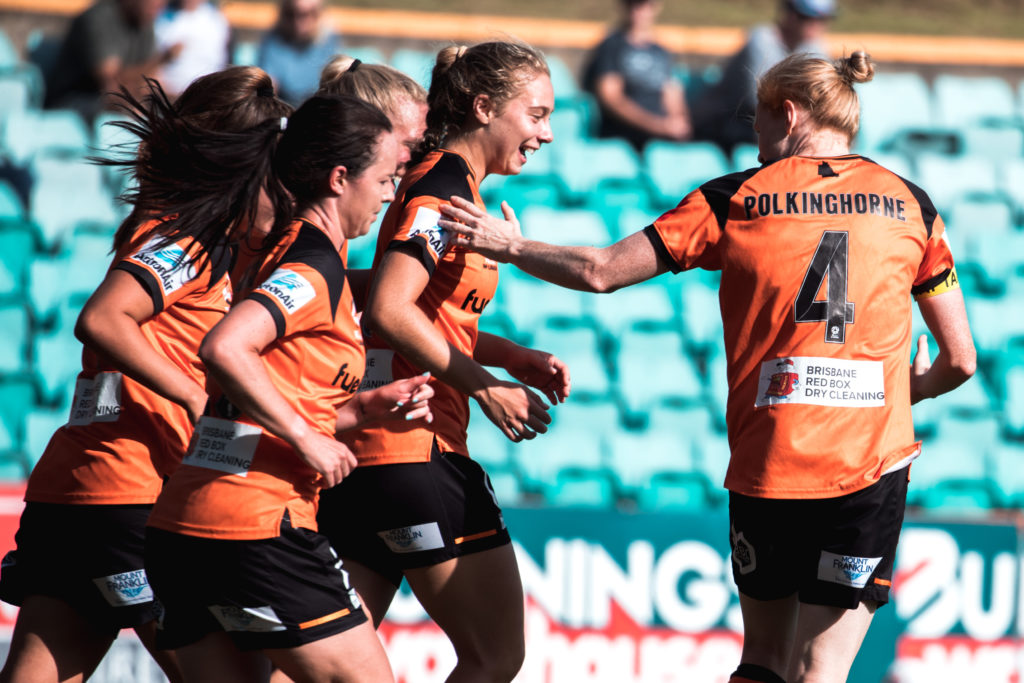 On Feb. 11, Brisbane Roar used two Emily Gielnik goals within the first 32 minutes of the game to see off host Western Sydney Wanderers 2-1 and remain undefeated in the 2020-21 campaign with their third consecutive victory. Leena Khamis opened the scoring for the Wanderers on a brilliant defense splitting ball from Libby Copus-Brown for her first goal of the season; she now has 44 in her W-League career and is only six behind Kyah Simon (50) for fourth place in the all-time goal scorers’ list.

Emily Gielnik’s second brace of the season pulled her into a tie for the goal scoring lead with Canberra’s Michelle Heyman, with both on six tallies. Gielnik has 39 W-League career goals, tied with the Newcastle Jet’s Tara Andrews (who has five goals this season) for ninth best in the W-League. Gielnik’s second goal came from the penalty spot when the referee determined that Mariel Hecker’s shot hit Georgia Yeoman-Dale’s hand as the defender was just inside the penalty box.

Morgan Aquino (19) made her debut in goal for the Roar after starter Georgina Worth was ruled out with a knee injury. She finished the game with two saves but none was more important to ensure the three points for her club than a spectacular one-handed save from Khamis, who was just a few feet in front of goal, in the 96th minute. Aquino played three games last season for Perth Glory.

Ah, COVID-driven scheduling—nothing can ever be straight forward or easy this season. Brisbane Roar had only two rest days between their win over Western Sydney Wanderers on Thursday, Feb. 11 and their second road game of the round against Sydney FC on Sunday, Feb. 14, as both teams entered the match unbeaten.

Brisbane stunned Sydney in a 4-1 win in front of a crowd of 1,126, with the Roar remaining the only undefeated team in the league. Sydney, which previously had allowed only one goal in six games, still controls the Premiership race as they are two points ahead of the Roar in the table with a game in hand. Brisbane’s four consecutive ties to start the season could end up costing them the regular season title.

Rockin' the baby with that goal @clarepolks89! 👶

For Brisbane, Tameka Yallop and Clare Polkinghorne each scored their second goal of the season, while 17-year old Jamilla Rankin scored a brace in only her ninth W-League game over two seasons, both as a result of goalkeeping errors from Sydney backstop and Matilda pool player Jada Whyman.

Midfielder Clare Wheeler scored Sydney’s loan tally. For Wheeler (23), it was her first ever goal in eight seasons (72 games), while all her previous campaigns were with the Newcastle Jets. The Roar dominated Sydney for time of possession (57% vs. 43%), shots (14 vs. 7) and shots on goal (6 vs. 3).

Adelaide United had a huge home victory on February 14 against Canberra United in front of 969 fans, with goals from Emily Condon (her third of the season) and Chelsea Dawber (her second in 2020-21). Condon scored the winner ten minutes into the second half with a brilliant bending ball from about six yards in front of goal which swerved away from Sydney FC central defender Clare Hunt and keeper Keeley Richards.

Adelaide leapfrogged Canberra to take sole position of third place in the standings. Canberra, which lost its second consecutive match after a five match undefeated run, countered with a goal by 22-year-old New Zealand international forward Paige Satchell, her first in the league. Canberra United backup keeper Richards was outstanding in her third match for the club, finishing with six goals and preventing Adelaide from adding to its margin of victory with some fine saves. For Adelaide, Australian U-17 and U-20 international Annalee Grove (19) won her debut W-League appearance in goal and finished with four saves.

Note: The Newcastle Jets were due to travel to take on Melbourne City on Friday, February 12 but the match was postponed after the State of Victoria Government instituted a 5-day Level 4 lockdown the day before because of COVID-19, so teams outside of the State were not allowed to enter. There is good news in the west however as the Western Australian Government has relaxed border restrictions with New South Wales, so next week Perth Glory will travel to Sydney to take on the Wanderers before moving on to Queensland to face the Brisbane Roar. Perth has a number of games to make up, as they have only played three times thus far this season.

Over the course of three days, Brisbane Roar won two games in Sydney while scoring six goals with strong performances from Emily Gielnek, Tameka Yallop and Clare Polkinghorne, but it was stand-in goalkeeper Morgan Aquino who was a vital difference maker to ensure that the Roar left the Harbor City with six points. The 19-year old Australian youth international made the save of the week in the dying moments of the 2-1 win over the Western Sydney Wanderers and then repelled a number of early attacks in the 4-1 win over previously undefeated Sydney FC. She recorded two saves in each match.

She was partially at fault for Sydney FC’s first goal when Clare Wheeler blocked her clearance and scored early—though she was given a bit of a suicide ball by one of her backs—but even then the teenager was not perplexed and her calm demeanor in only her fifth W-League game over two seasons could see her continue to start ahead of Georgina Worth (23), who has been with the Roar since 2017 but who herself has played in only 14 games—six this year, before being injured.

Forward Nicki Flannery has been a key part of Canberra’s transformation this season into a vibrant playoff challenger after struggling for the past three seasons under former head coach Heather Garriock, who is now in charge of the Australian Taekwondo Federation. Vicki Linton, who spent time as an assistant coach for the U.S. Women’s U-20 national team, has brought in a new coaching perspective and new players.

Flannery had played last season at Newcastle Jets but returned to her original club, where she spent four seasons beginning in 2015-16.

She explained, “A new coach always brings a new style of football. A lot of us have played together growing up and have played with and against each other so we create combinations and have a good level of understanding. The coaching staff uses our strengths and helps us to our best abilities.”

In Round 2, Flannery scored a golazo at home from beyond 25 yards against Melbourne City in the very last seconds of injury time to give her side their second consecutive injury time victory of the season, while starting City’s spiraling descent away from a playoff berth.

Flannery talked to Equalizer Soccer about that goal earlier this week, “I was a bit tired as I had to race to the bench to give the captain’s armband back to Grace Maher, so I stayed up front. I was trying to create space on the shot. We had to win the game and it was crucial to get the points, particularly at the beginning of the season. You have to back yourself in that situation. As they say, ‘You don’t score what you don’t attempt.’” 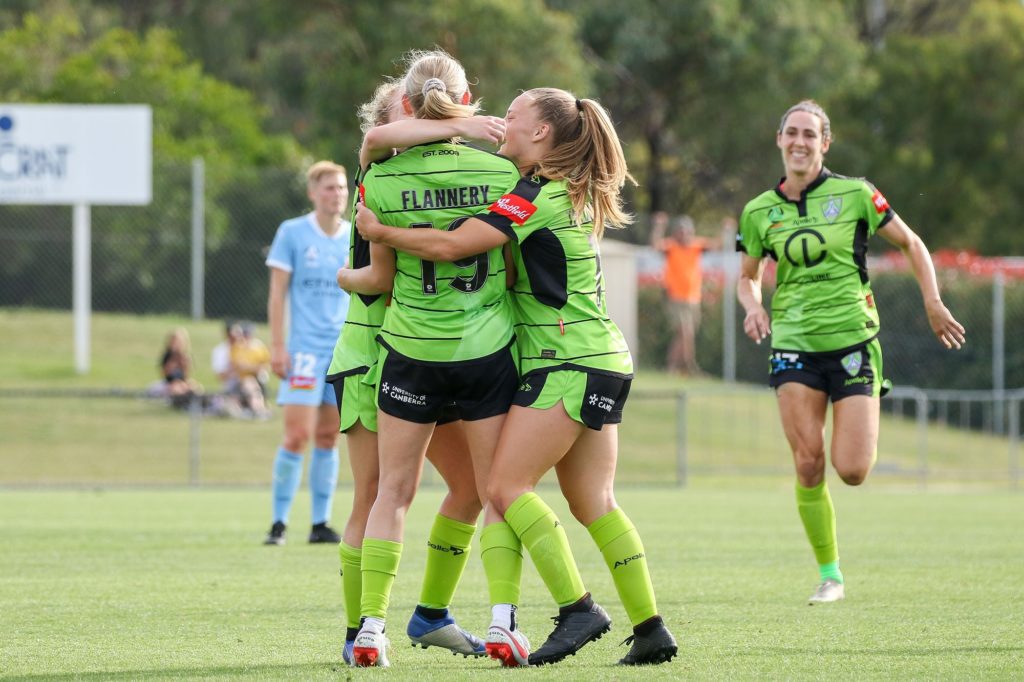 Flannery talked about her future soccer career plans. She is finishing her last year at Sydney University where she studies Architecture, saying wryly, “It’s not easy to combine W-League play and Architecture studies.” Once she graduates, then she wants to, “Look at playing overseas. There are good leagues in Europe and Scandinavia is a possibility. It is a very different world now because of COVID with possibilities limited. The U.S. has a strong league with physical and clever play and that could suite my style of football. It is different to playing in Japan, China and South Korea.” 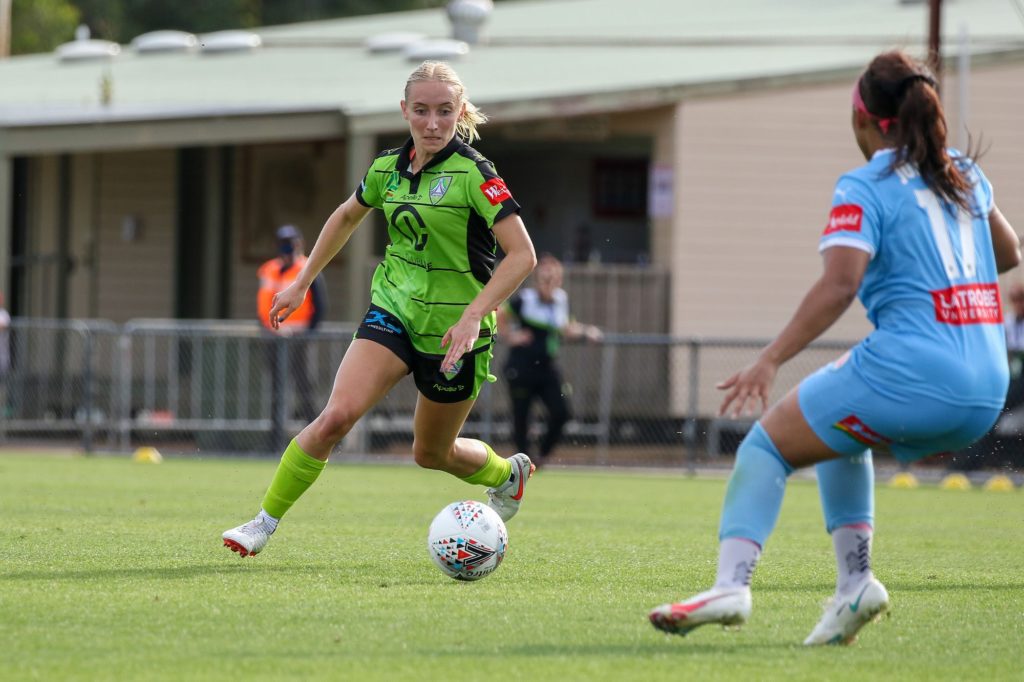 Flannery is an extremely well-spoken individual and, after playing for almost a quarter of her life in the W-League, she had some great insights on the possibility of future expansion, after teams have taken this season to develop the roster depth, with so many Matildas going abroad and the sharp reduction of NWSL loanees.

“Expansion of the league is a good thing. This was a great year to not expand in order to develop young players. It would be great to have a full home and away schedule [16 games versus the current 12]. Wellington Phoenix should be the first team [added to the league] and it will help with bonding of the two countries ahead of the Women’s World Cup in 2003,” she said.

Flannery wisely did not want to see rampant expansion and not more than one or two new sides added over the next few years, saying that, “If you expand by three clubs, it would not be as positive. The league has been pretty up in the air in most games [results-wise] which you want and has been good.”

Nicki Flannery is definitely a player that readers will be hearing more about over the next few years, in the W-League, possibly abroad or even with the Matildas’ set-up.

.@brisbaneroar creeps closer to the top while @AdelaideUnited makes the climb to third! 🧗‍♀️