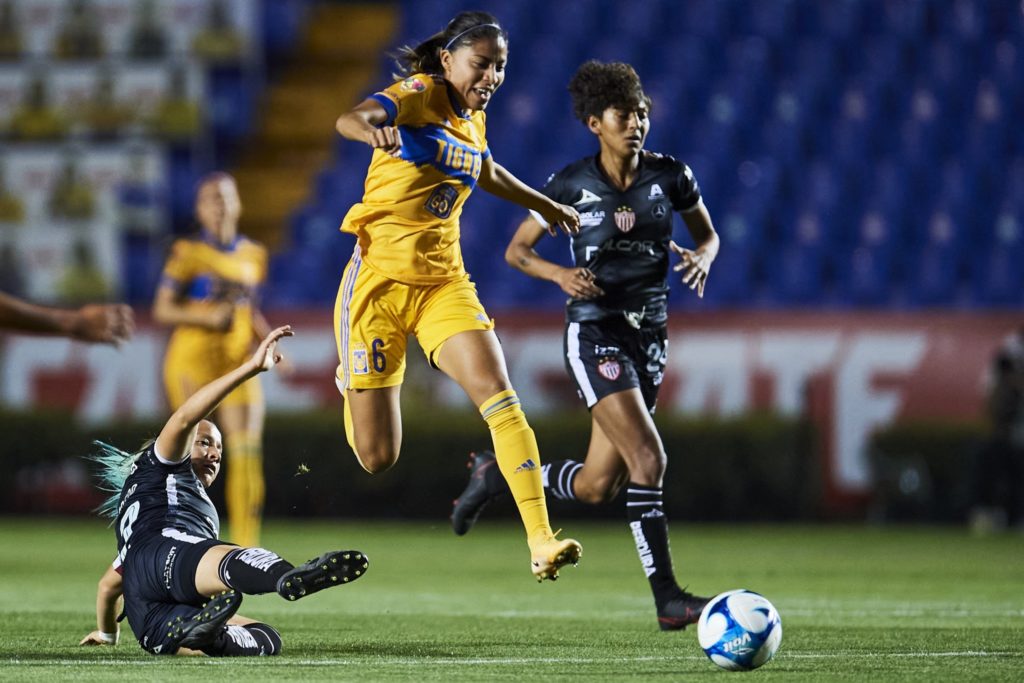 Liga MX Femenil had a tight schedule for Weeks 5 and 6, with no even one day of rest between the next slew of matches. Teams had to gear up and get ready for a new slate of competition. Due to the number of games, we will list the scores below and the highlight five matches from Week 5 and Week 6.

Tigres was stunned on the road by last-place Atlético San Luis, splitting the points in a scoreless draw. While it doesn’t sound exciting, the result is newsworthy. The draw knocked Tigres down the table a bit, and the San Luis defense remained disciplined when earning their first point of the season.

Tigres was limited for scoring opportunities, too, with only two corner kicks and two shots on goal. San Luis goalkeeper Stefani Jimenez stood strong in net and earned some confidence heading into the coming matches. However, San Luis did drop their Week 6 contest to Guadalajara.

Tigres did bounce back and claim a 2-0 victory over Necaxa to boost them up to fourth place.

Monterrey began the Clausura in dominant fashion, winning games by scoring five goals in each match. In the last couple weeks, Monterrey dipped in performance. However, on Feb. 4, Monterrey picked back up and scored five goals over Cruz Azul at home.

Mónica Monsivais and Daniela Solis each had two goals to their name. Aylin Avilez tacked on the dagger in the 90th minute.

Monsivais’ first goal came in the 7th minute on a penalty kick attempt. She hit her shot toward the right, and tucked it in past goalkeeper Karla Morales, who dove the correct way. Her second goal came in the 23rd minute off a header inside the box. Solis chipped goalkeeper Morales right before halftime to give the home side a 3-0 advantage.

Out of the gate, Cruz Azul picked up some momentum, courtesy of Daniela Monroy, who scored the lone goal for the visitors. Monroy scored off a free kick, which hit the bar and bounced over the line, according to referee Lucila Venegas Montes.

However, Monterrey continued to pile on goals. Solis scored her second only six minutes after Cruz Azul’s goal. After an initial hit from one of her teammates, Solis picked up the rebound and put it past Morales. Meanwhile, as the minutes waned down in the second half, Avilez went one-on-one with her defender, spun her around, and let her shot off at the top of the box.

Monterrey currently sits in third place after Weeks 5 & 6, while Cruz Azul is in the middle in 10th place.

While Atlas still has an unbeaten streak intact, the winning streak is over. Atlas drew at home with Pachuca, with both sides scoring a combined total of six goals. Atlas forward Alison Gonzalez was one of those scorers, continuing her dominant play this season.

Pachuca seemed to have the match under control for the first 40 minutes. Monica Ocampo scored off a rebound from a teammate’s attempt inside the box. Two minutes later, Viridiana Salazar scored inside the box, right in front of goal, as she picked up a poor clearance from Atlas goalkeeper Ana Paz. In the 38th minute, Salazar scored her second goal, this time on a penalty kick aimed at the left corner of the net.

However, Pachuca gave Atlas too much space and leniency toward the end of the first half.

In the 40th minute, Karen Garcia scored a goal to start a major Atlas comeback, as the home side was down 3-0. Garcia scored on a free kick taken at a slanted angle, sending it past Pachuca goalkeeper Esthefanny Barreras. Gonzalez scored her goal in the 44th minute, giving Atlas more confidence heading into the locker rooms. Gonzalez scored on a header inside the box, with the cross coming in from Valeria Razo.

Razo then tacked on the final goal in the 90th minute, giving Atlas one point and leaving Pachuca with a complete defensive breakdown. Barreras came off her line to punch away a free kick attempt. As the ball exchanged many touches inside the box, Barreras remained off her line, looking to scoop it up. However, Razo chipped the ball over and into net, making the final score 3-3.

Atlas isn’t on top any more, but they’re hot on the heels of first-place Pumas and sit in second place. Meanwhile, Pachuca sits in eighth place and on the heels of Club América.

One draw and five losses has plagued FC Juárez this Clausura season. On Feb. 6, Juárez added to that losing streak with a third loss in a row, this time at the hands of Club Tijuana.

Tijuana has been a rollercoaster this season, though. After starting off the year slow, Tijuana has picked up a slew of points. In Week 5, Tijuana picked up one point in a draw with Mazatlán and the week before that, the team picked up its first three Clausura points against San Luis.

Opposite of Juárez, Tijuana is riding a three-game unbeaten streak. Renae Cuellar — who scored a hat-trick in that win against San Luis — scored once again, this time in the 88th minute to give all three points to the visitors. Cuellar’s goal was scored on a penalty kick, hit toward the left post.

It was her teammate, Rosa Aguiar, who scored first, though. In the 10th minute, Aguiar chipped the goalkeeper from about 10 yards away from the center of the pitch. She picked up a misplaced Juárez pass and hit it over goalkeeper Alondra Ubaldo.

Juárez didn’t go quietly, though. In the 64th minute, Atzimba Casas scored an equalizer when she out-ran her defender and slide her shot past Xolos goalkeeper Itzel Gonzalez. However, it was Cuellar’s shot that made the difference and sent Tijuana home with all three points.

The win propelled Tijuana up the table, putting them in 12th place, while Juárez is in 16th place.

Club America and Club Leon met up on Feb. 7 to battle for a position higher up the table. However, both remain in the middle after a 1-1 draw.

Leon struck first, courtesy of Lucero Cuevas in the 11th minute. Cuevas snatched an interception from Club America inside the penalty area and used her right foot to knock the shot past goalkeeper Natalia Acuna. However, it was Dorian Hernandez who equalized for Club America in the 75th minute off a slanted shot inside the box.

America sits in seventh place ,while Leon holds down to ninth place. There’s a lot left in the Clausura competition, but these two sides have been stuck in the middle of the table, desperately trying to achieve three points in matches.