WoSo Around the World: Germany back in action 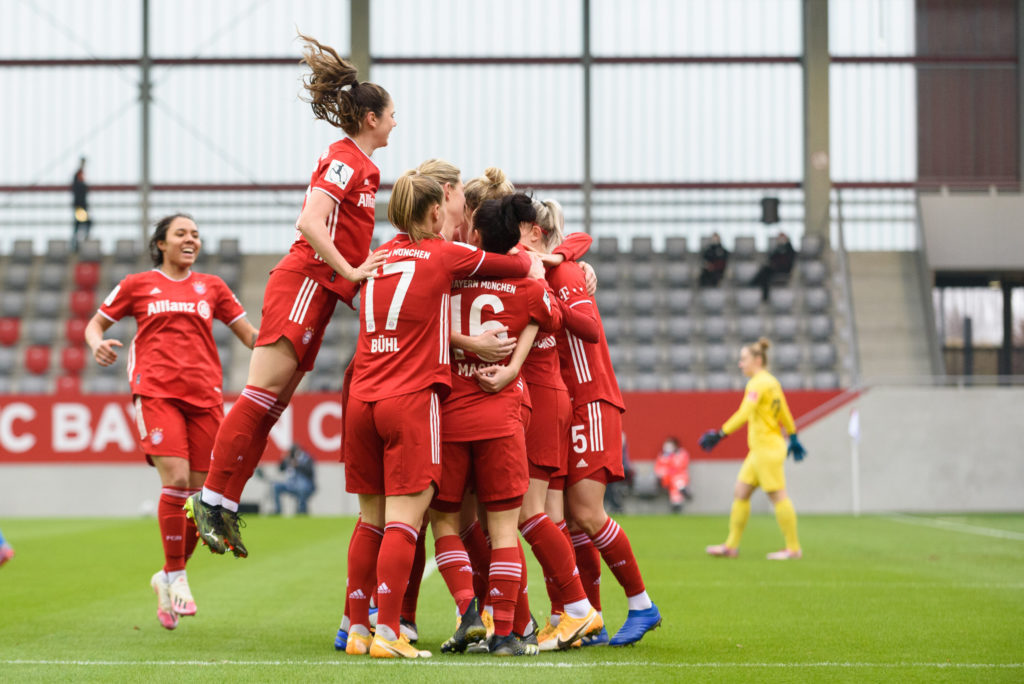 Germany got back to soccer last weekend after a long break but the real action was in England where upsets ruled the day and in Spain where the three-minute hat trick was in vogue.

The Latest: The return of the Fraun Bundesliga saw only three games answer the bell and the three top teams were the winners. The wins by Wolfsburg over Potsdam (3-2) and Hoffenheim over Leverkusen (6-0) put some distance between third-place Hoffenheim and fourth-place Potsdam. Nicole Billa scored a hat trick for Hoffenheim to reach 17 goals, a half dozen more than her closest pursuer, Laura Freigang of Frankfurt.

The Latest: The plot thickened when Chelsea and Manchester United tasted unlikely defeats allowing Manchester City to sneak into the heart of the title race. For more on United and Chelsea’s home losses, check out Emily Dulhanty’s weekly FAWSL recap here.

The Latest: Lyon just eked by Montpellier 2-1, the decider coming on an own goal near the end of the first half. Meanwhile Paris Saint-Germain pounded Fleury 91 5-0 away to stay a point ahead. The sides meet March 13 in Lyon in a match likely to decide the championship. In other action Soyaux got a 22nd minute goal from Laura Bourgouin to win 1-0 at Issy and get themselves out of the relegation zone.

The Latest: Levante lost their makeup match against leaders Barcelona 3-0 and then went on the road and drew Rayo Vallecano to lose their grip on second place. They still lead Real Madrid by a point but Real have played one less match. In their weekend tie against Valencia, Kosovare Asslani scored a 155-second hat trick that had the soccer world buzzing. Valencia scored a minute later meaning all four goals Real’s 3-1 win were scored between the 67th and 71th minutes.

Abby Dahlkemper (Courage, rights) played 90 minutes for Manchester City in their all-important, 2-1 win over Arsenal. Rose Lavelle (Reign, rights) was a late sub, coming on in the 87th minute and Sam Mewis (Courage, rights) was unavailable through injury though she is expected for SheBelieves Cup. The Arsenal goal came courtesy of an in-form Caitlin Foord (Louisville) who played the entire match… Sam Kerr (Red Stars, rights) put Chelsea on top of Brighton & Hove Albion after 5 minutes but the easy win was not to be as the Blues fell 2-1 to snap a 33-match unbeaten run. Kerr did not play in Continental Cup action against West Ham (w. 6-0)… Jess Fishlock (Reign) was prominent though not on the scoresheet in Reading’s biggest win of the season, 2-0 over Manchester United. Christen Press (Louisville, rights) played the full match for United while Tobin Heath (Louisville, rights) continues to be out with an ankle injury… Alanna Kennedy (Louisville, rights) and Shelina Zadorsky (Pride, rights) both played 90 for Tottenham who fell 1-0 to Aston Villa. Kennedy was booked late in the match… Emily van Egmond (Pride, rights) played the full match and scored an own goal for West Ham in a 1-1 draw against Bristol City. She also played the full Continental Cup match, 6-0 loss to Chelsea.

*We will do our best to track 2021 draft picks playing the Spring NCAA season.
*Catch up on the action down in Liga MX Femenil (Mexico) with Rachael Kriger’s latest roundup.