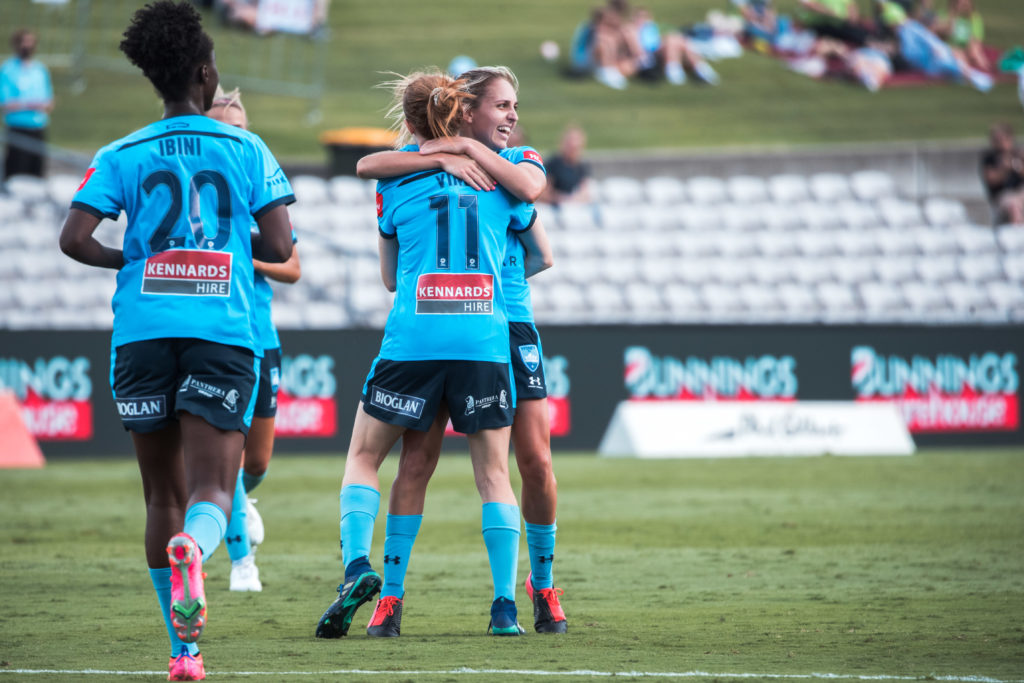 Sydney has extended its lead in the W-League after blanking Melbourne City and Canberra United in Round 7 in the span of four days.

On Feb. 4, Sydney FC defeated Melbourne City 2-0 in a replay of last season’s Grand Final on a pair of second half goals from Remy Siemsen (her second in two games) and Natalie Tobin. The match was moved to AAMI Park from the Frank Holohan Reserve because of poor field conditions and then held without fans due to the late change and not being able to get the state approvals for COVID-19 safe protocols for attendees in time.

Thus, the atmosphere was similar to last season’s championship game, in which City triumphed 1-0 at the same site in the first W-League match that did not allow the general public (just a small crowd of team family members) because of COVID-19. The result however was quite different this year.

It was a Round 7 to remember for @jada_whyman 💪

Tobin, who has only played with the Sky Blues in her eight W-League seasons, scored just her third goal in 56 league matches with 15 minutes to go in the match. Tobin started in place of former Houston Dash defender Ellie Brush, who is hopefully out for only a few games with an ankle injury. Midfielder Cortnee Vine had an outstanding match for Sydney FC, feeding Siemsen for the first goal, and was fouled by City’s Serbian international Tyla Jay Vlajnic in the 55th minutes, only four minutes after Siemsen’s opening goal.

Vine had a breakaway towards the City defense but, before she entered the City penalty area, Vlajnic took her down and was shown a red card. Ten women City was further handicapped when central defender Jenna McCormick went out with a leg injury in the 76th minute, replaced by Rhali Dobson—the former Australian youth international who had one cap from 2014 with the Matildas and is an 11 year veteran of the W-League. McCormick was stellar with an 89% passing efficiency on 64 passes, the most of any City player in the game, despite missing the last minutes.

Sydney FC won only for the second time in six seasons against City, with eight defeats and one draw in their previous meetings. Sydney FC remains unbeaten and untied and at the top of the table. For Melbourne City, which only has five games remaining, it is looking like it is too late for them to salvage a playoff berth. City has faced a league high 126 shots in their seven matches and allowed a league leading 17 goals, despite the fact that former UCLA goalkeeper and Australian 2019 Women’s World Cup squad member Teagan Micah has been quite good in goal, leading all the league’s goalkeepers in saves with 31.

Against home side Western Sydney Wanderers on Feb. 7, Adelaide United looked set to win its fourth game out of six played in 2020/21, which would have been their second highest number of wins in their thirteen W-League seasons and one behind their record five triumphs in the 2018-19 season, when they finished in sixth place with 18 points. However, with 12 minutes to go, 17-year-old Sarah Hunter scored her second goal of the game for Western Sydney Wanderers, who ended up sharing the points 2-2.

Dylan Holmes scored her club leading third goal of the season in the 71st minute to put Adelaide ahead 2-1 after Chelsea Dawber opened the scoring for the Reds in the 33rd minute, on an assist from American NWSL loanee Mallory Weber, who was back in the lineup after missing two matches with a hamstring injury. Ten minutes after the first goal, teenager Hunter scored for WSW to knot the score heading into halftime.

.@DylanHolmes08 with composure to chest it down then put it away 👌

In the second half, seven minutes after Holmes goal, Hunter had scored her second goal. She played in the NPLW last season for Football New South Wales in the WPLW and is yet another example of the wealth of young talent that has had more opportunities to play regularly this season, with many senior internationals playing abroad and virtually no NWSL loanees who have been so plentiful in recent seasons (see more below).

Adelaide United are now tied with Brisbane Roar and Melbourne Victory for third place on 10 points, but the Roar have a much better goal differential (+7 vs. +1), while the Victory has a slight advantage (+2 vs. +1) over the Reds.

On Feb. 7, in a late additional game that first was to feature Perth Glory visiting Melbourne Victory, Melbourne Victory ended up hosting and defeating Newcastle Jets 4-2 in front of a crowd of only 413. Melina Ayers, New Zealand international defender Claudia Bunge and Kyra Cooney-Cross all posted first half goals for Melbourne. Newcastle Jets fought back in the second half with Tara Andrews scoring her fifth goal of the season in the 48th minute and Rhianna Pollicina scoring her first W-League goal in the 76th minute from an inch perfect 35 yard pass upfield from wingback Tess Tamplin.

Ayers then scored her second goal five minutes later to secure the points. Pollicina (24) played five games for the Wanderers in 2014 and was capped by the Australian U-17 national team that season. She has been playing senior futsal for years for Inner West Magic and recently started her own football academy for girls.

of chasers tied for third, after their second victory in four days. Mackenzie Hawksby scored the opener in the 16th minute and in the second half, Cortnee Vine scored her third of the season in the 64th minute before Remy Siemsen scored a brace within four minutes to finish the scoring. Siemsen now is tied for third in the league in scoring with Emily Gielnik of Brisbane on four goals. Hawkesby (20), in her second season at Sydney FC, also had an assist in the game and has 2 goals this season. She has also been playing in the New South Wales NPLW for Sydney Olympic.

An ice cool header by @remyysiemsen 🔥

Melina Ayers scored a brace—the opening and final tallies—in Victory’s important 4-2 home win over Adelaide United on Feb. 7; the Australian youth international now has three goals on the season and helped her side move up into a tie for third place in the table on 10 points. She now has 11 goals in 57 league games across six seasons. Ayers (21) is in college in Australia and has never played club ball abroad. She led both teams in passing effectiveness on 90% from 33 passes. She won 4 of 5 duels in the game and scored on two of her four shots.

Halfway through the season, Brisbane Roar added forward Larissa Crummer (25) to their side. The Matilda has won four Westfield W-League championship medals (three with Melbourne City and one with Sydney FC) and was the W-League’s leading scorer and Young Player of the Year in 2015-16. Crummer has a brief time abroad with the Seattle Reign in 2017 and is in her second stint with the Roar.

Melbourne City made a mid-season acquisition by signing Norwegian U-21 international midfielder Noor Eckhoff (21), who appeared in 15 games last season for Kolbotn of the Toppserien after starting at Lyn, where she won a league title in 2017. Kolbotn finished ninth in the league in 2020 but survived the relegation/promotion playoffs versus Medkila, the second place side in the second division, winning 6-2 on aggregate last November.

After 12 months away, Erica Halloway has re-joined @wswanderersfc for the remainder of the season and will share the captaincy with Caitlin Cooper 🔴⚫️#WLeague #WSW pic.twitter.com/Qv6tGSkoW7

The one Canadian in the league this season is W-League debutant Natalie Martineau (33), who signed from South Melbourne in the NPLW, where she won four Championships and was the Player of the Grand Final in 2014. She was raised near Toronto, was capped at the U-20 level by the Maple Leafs and played at Louisiana State University.

New Zealand has replaced the U.S. as the leading provider of imports in 2020-21, with seven Kiwis in the league compared to only two last season — Melbourne Victory’s Annalie Longo, who returned in 2020-21, and former Seattle Reign and Sky Blue FC defender Rebekah Stott at Melbourne City, who is now at Brighton in the FA WSL.

This increase in players from across the Tasman Sea is a sign of increased dialogue between the two Federations on a number of fronts as a result of winning joint hosting rights last summer to the 2023 FIFA Women’s World Cup. The number of New Zealand players in the league should rise in the years to come, particularly if Wellington Phoenix is successful in joining the league next season—their bid to play this season in New South Wales because of COVID-19 was denied just before the league started the season.

The U.S. follows with six imports: Mallory Weber of Adelaide United is the only NWSL loanee from Kansas City NWSL, along with Kendall Fletcher (Canberra United), Samantha Johnson (Melbourne City) and the Melbourne Victory trio of Argentinian/American Gaby Barton, Catherine Zimmerman and Kayla Morrison. Last season there were 24 Americans in the league but the change in W-League and NWSL schedules has prevented many loan agreements to W-League sides.

There are currently three W-League imports from England and one each from Brazil, Chile, Canada, Ireland, Japan and Norway.

.@SydneyFC are looking difficult to stop 😲