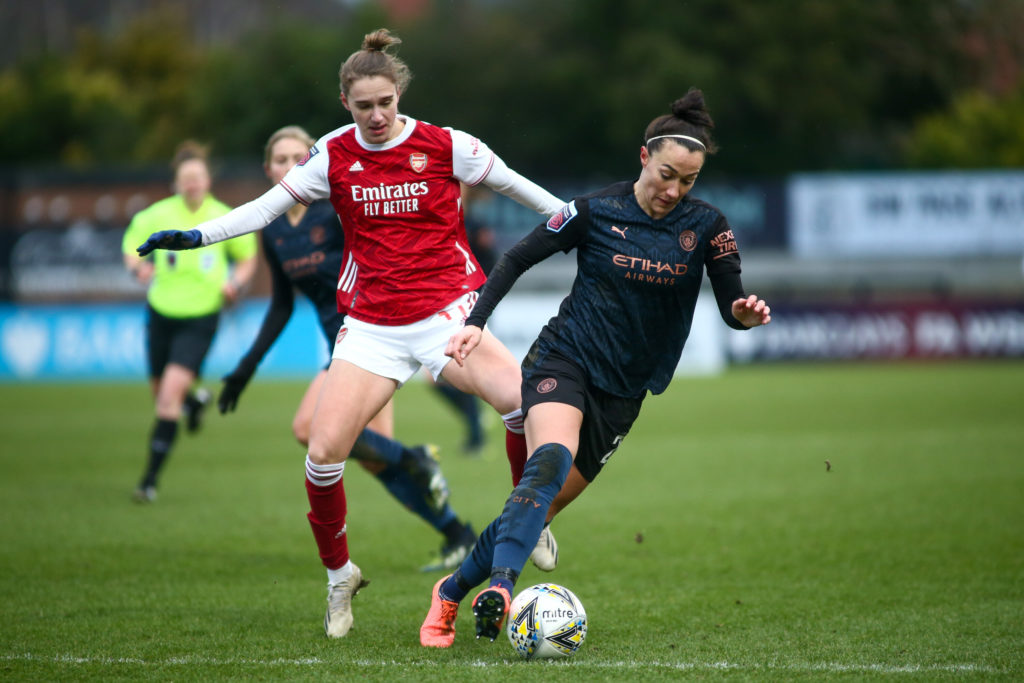 It was a wild weekend in England, as three of the top four in the FA Women’s Super League lost at home on Sunday. Though it was misery for some at the top, a few teams near the other end of the table picked up some much needed points. Read on for all of the week’s action!

What a great #BarclaysFAWSL mid-week we have to look forward to now!

Top four teams playing each other 😁

Who's looking forward to that? pic.twitter.com/rBIKHJ2MKd

Arsenal’s slump against top teams continued on Sunday, as they lost 2-1 at home against Manchester City.

Ellen White opened the scoring for City in the 24th minute, when, off the bounce, she finished a cross sent in by Chloe Kelly. Leah Williamson, who was captaining the Arsenal side, left way too much space for White, the WSL’s all-time leading goal scorer.

Arsenal scored an equalizer just ten minutes into the second half, when Jill Roord’s cross found Caitlin Ford unmarked in front of goal.

But as time ticked on, it seemed like Arsenal ran out of gas, and they had trouble keeping possession of the ball once it was won back. The bus parking only worked for so long, as Kelly found Lauren Hemp in front of goal in the 79th minute, who unleashed a powerful header into the back of the net for the winner.

What a header and City are ahead 2-1!
pic.twitter.com/iF5e0QbgEL

Abby Dahlkemper started the match for City and played 90 minutes, and Rose Lavelle came on as an 87th minute sub. Sam Mewis was not available for the match through injury.

With the top three (and Champions League spots) slipping away, the Gunners have another tough challenge in store when they travel to play Chelsea on Wednesday.

Brighton ended Chelsea’s record 33-game WSL unbeaten streak on Sunday with a 2-1 win. And that wasn’t the only streak in question: Brighton’s six game streak without a win was also broken. Those two stats give you an idea of the size of this upset.

With Chelsea facing an upcoming mid-week match against Arsenal, coach Emma Hayes’ seemed to opt for a bit of squad rotation, as she chose to rest Pernille Harder, Fran Kirby, and Ji So-yun.

Things started according to plan for the Blues, as Sam Kerr headed home a corner kick in the 5th minute. But just three minutes later, Brighton equalized on a corner of their own. Aileen Whelan was able to lose her mark and finish Megan Connolly’s service with her head.

After Hayes brought on a slate of second half substitutions, Brighton shocked Chelsea with the winner in the 78th minute. This time, Connolly’s corner kick was misjudged by Chelsea keeper Carly Telford, and it found the back of the net without hitting another Brighton player along the way!

Meanwhile, Brighton have taken a 2-1 lead over Chelsea 👀

Just minutes to play in this one… pic.twitter.com/1KCNntwYF4

Chelsea still hold the top spot in the table. They are tied on points with Manchester United, but have a game in hand.

Defensive lapses, both off of set pieces, as well as a well-executed performance by Reading caused Manchester United’s demise on Sunday.

Reading started knocking on the door from the second half whistle. In the 63rd minute, the Red Devils couldn’t clear a corner kick, and Natasha Harding got her head on the ensuing scramble in front of goal, giving her side the lead. And just two minutes later, Danielle Carter, unmarked, doubled Reading’s lead when she headed home a free kick.

FINALLY WE HAVE A GOAL ⚽

Along with this impressive win, Reading has also recorded draws with Arsenal, Everton, and City this WSL season. They currently sit in sixth place in the table.

Danielle Turner’s superbly placed free kick was cancelled out by a goal from Jamielee Napier on Sunday, as Everton and Birmingham City played to a 1-1 draw.

On Sunday, an own goal from Emily van Egmond handed Bristol City an early 1-0 lead, but an equalizer by West Ham’s Kateřina Svitková in the second half sealed the draw and a point each for the WSL’s bottom two teams.

Last week, The Equalizer’s Blair Newman wrote about Bristol City’s Ebony Salmon, who narrowly missed scoring for her side on Sunday by hitting the post.

After an impressive first start in the league last weekend, Mana Iwabuchi scored a first-half stunner on Saturday to give Aston Villa the win over Tottenham Hotspur.

After watching this strike a few times, I can’t help but wonder if Iwabuchi has the title of “best January signing” locked down:

Could this be the goal of the weekend? @buchi_mana sets the bar high with this incredible strike 🔥 pic.twitter.com/f1jRseHmpJ