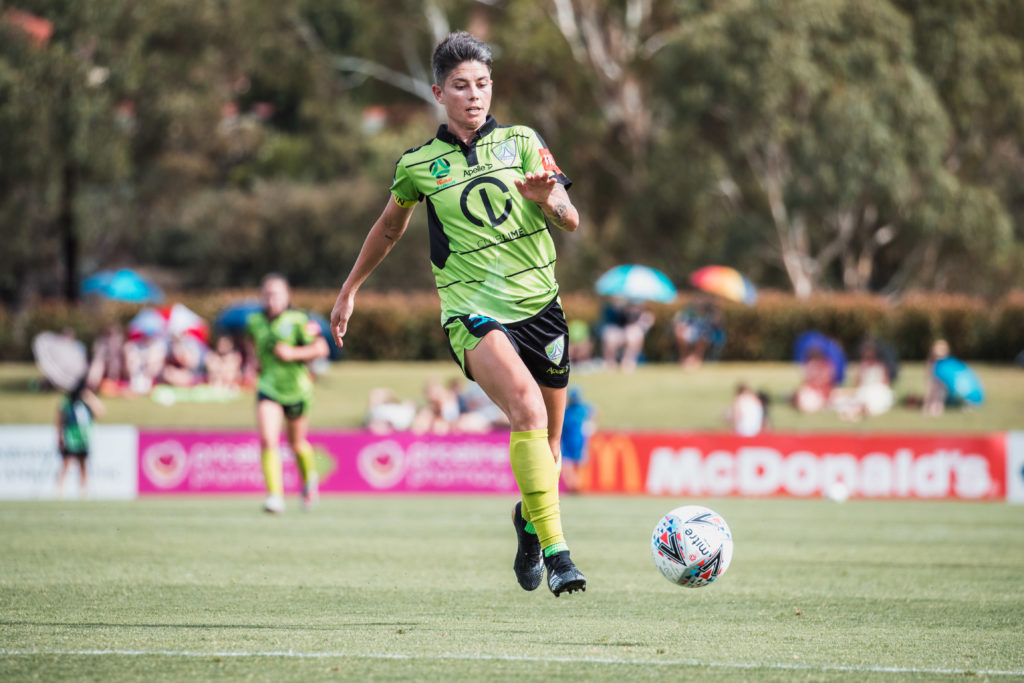 On January 29, Melbourne Victory bounced back from a two game losing skid to defeat Adelaide United on the road 1-0, with the winning goal coming from Victory’s American forward Catherine Zimmerman in the 78th minute.

Zimmerman, the former Sky Blue FC forward who has won two consecutive NSL (State League) Golden Boots for Melbourne’s Calder United, now has three W-League goals this season and is fourth behind Michelle Heyman of Canberra (six goals), Tara Andrews of Newcastle and Emily Gielnik of Brisbane, who both have four tallies. Zimmerman is definitely improving her stature and visibility in the global club game with her performances for the Victory. The two sides were quite similar in key statistics with Melbourne Victory having a slight edge in possession (52% vs. 48%) and shots (12 vs. 9), while Adelaide had one more shot on goal (3 vs. 2) than did Melbourne.

Right place, right time from Catherine Zimmerman to head @victorywleague into the lead!

Adelaide United defender Maruschka Waldus (28) is a native of the Netherlands and has been a key addition this season. She has played two previous seasons in the W-League at Western Sydney. She spent the last two European seasons with Valerenga of Norway’s Toppserien, who won the 2020 title on goal difference over Rosenborg. She played one season at the University of Alabama before a short spell with Sky Blue FC in the NWSL in 2015.

She has also played in Sweden, Germany and Iceland. In the loss against Melbourne Victory, she led Adelaide with a phenomenal 91% passing efficiency mark on 31 passes, while Melbourne’s Australian youth international Kyra Cooney-Cross was quite good as well at 88% from 33 passes and also won all three tackles she attempted. The Red’s American forward Mallory Weber missed her second consecutive game with a hamstring injury.

On January 29, in a game that was originally scheduled to take place in Round 9, Michelle Heyman recorded two goals in the first 34 minutes, and a Georgia Yeoman-Dale own goal just before the half time break powered Canberra United to a 3-0 home win over the Western Sydney Wanderers, keeping Canberra undefeated after five games and one point behind the leaders Sydney FC, who have 12 points. Heyman’s first goal within the first four minutes was superb, as she received a ball at the top of the box, turned quickly on her defender and fired a long blast past Wanderers goalkeeper Sarah Willacy.

It appeared at first that Heyman had scored the third Canberra goal for her second hat-trick of the season, but it was officially awarded as an own-goal, caroming off the leg of Yeoman-Dale from a corner kick with Heyman close behind her. For Heyman, who now has 69 W-League goals, she is one goal short of tying Sam Kerr (now with Chelsea in the WSL) for the all-time league goal-scoring lead.

Keeley Richards (26) made her W-League debut in goal for Canberra, saving four shots and finishing with a shutout, the Green’s first of the season. Richards, the third goalkeeper to start a game for Canberra this season, had been playing for Logan Lighting in the Queensland NPLW, where she is the team captain and helped her club make the Queensland Grand Final this past season, losing 4-0 to Queensland Lions FC. Last week, American Chantel Jones, now an assistant coach with the team, stepped in for injured starter Sally James in their 1-1 home tie with Perth Glory on Jan. 24.

Former Seattle Reign veteran and captain Kendall Fletcher, who missed a game with a minor injury, was back in the Canberra side and was hugely influential in starting attacks from her defensive midfield position. Fletcher had the most passes of any player in the game (64), with a 72% passing efficiency and won both of her two tackle attempts. She has been living in Australia since 2017 and is playing her ninth W-League season, five of which have been for the Greens.

In an exciting match, Brisbane Roar remained undefeated after defeating Melbourne City 3-2 on Feb. 1 in front of 1,975 fans at AAMI Park in central Melbourne. Matilda and former UCLA goalkeeper Teagan Micah was outstanding in goal in the defeat, with nine saves on 12 shots. Matildas Clare Polkinghorn and Emily Gielnek scored first half goals for the Roar; their leading scorer Gielnek has four goals this season.

The second goal came when fellow Matilda Tameka Yallop shot from the edge of the box and American import Sam Johnson was called for a handball, which Gielnek slotted into the goal past Micah from the penalty spot. Melbourne City came back to tie things up in the second half as Matilda Alex Chidiac scored her second goal of the season just after the break and Johnson scored her first W-League goal in 42 W-League games across four seasons, dating back to the 2014 campaign with Sydney FC.

Johnson’ 73rd minute score came from a penalty kick after Olivia Chance fouled the ever-dangerous Japanese international Chinatsu Kira in the box and the defender redeemed herself for the first half call that went against her which resulted in the Roar’s second goal.

Brazilian native Mariel Hecker scored two minutes later to give the Roar the win on a telling pass from Yallop.

Hecher did a Bachelor’s degree in Brazil and has been studying Osteopathy at Southern Cross University and previously played in the Queensland Lions championship side in the NPLW.

Alex Chidiac with a quick goal after half time 🚀

Melbourne City is now in real danger of missing the playoffs for only the second time in their six seasons in the league, with only one win and a tie in six matches, leaving them in a tie with Newcastle Jets for sixth with 4 points. They are tied for the most losses in the league with Western Sydney Wanderers with four, but have played one more game than Western Sydney (6 vs. 5).

Sydney FC defeated Newcastle Jets 2-0 at home on February 1 in front of 1,329 fans. Cortnee Vine scored her second goal of the season in the first half and last season’s W-League joint leading scorer Remy Siemsen opened her 2020-21 scoring account in the second half. Vine, in her first season with the Sky Blues, has been a force this season and now has seven goals in 47 league goals across six seasons, having previously been with Brisbane, Newcastle and Western Sydney.

Despite playing at least one fewer game then every other team in the league except Perth Glory, Sydney FC is top of the table and has allowed only one goal all season.

.@jada_whyman clutches to the ball, as if she was clutching to life itself 💪🧤

Canberra United is a strong unit but having to use three starting goalkeepers in five games would unravel many sides. Canberra’s offense (tied for best in the league with the Roar) is so much better with Heyman leading it and her vibrant return to the game this year has coach Vicki Linton thinking of a Grand Final spot at the end of the season, as Heyman and the Greens keep rolling on, hoping to grab their first playoff berth in four seasons.

Round 6 is in the books with @SydneyFC extending their lead on top 📖#WLeague Ladder, presented by Bunnings Warehouse. pic.twitter.com/mqTyN9vBE1