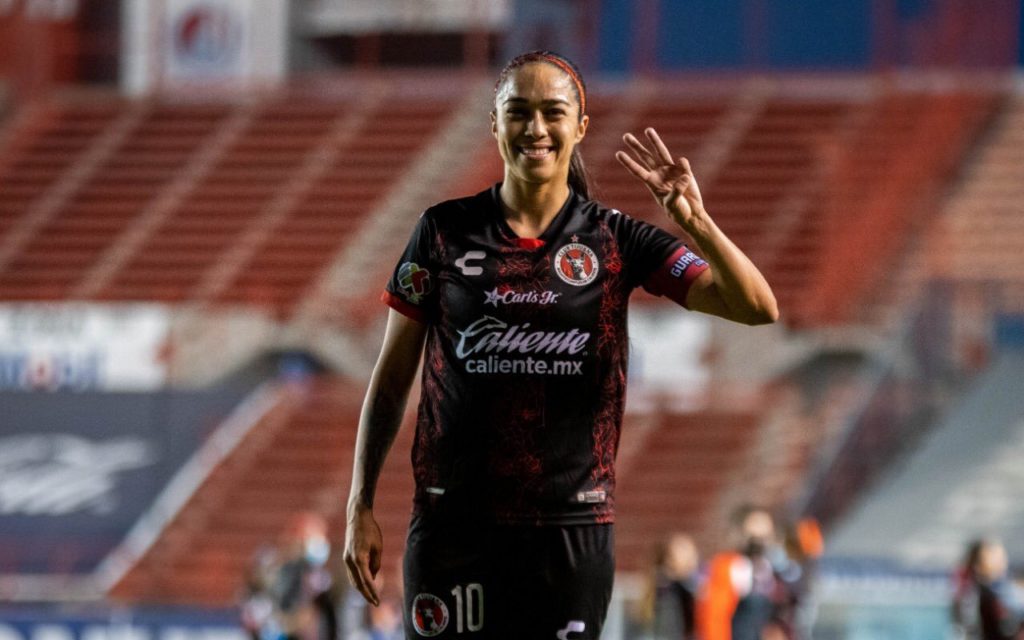 As the Mexican women’s national team camp wrapped up, the Clausura action didn’t slow down in Liga MX Femenil. In its fourth week, the Clausura table boasts only one team winning all four matches: Atlas. Meanwhile, some shuffling has taken place on the board with some surprising final scores.

We recap all the action in Mexico from the fourth week of Clausura competition.

What a first half! Eight goals in total throughout the entire match were scored by San Luis and Tijuana – all in the first 45 minutes. Renae Cuéllar — who was left off the recent Mexico training roster — scored a hat trick within 21 minutes of action for Tijuana.

Cuéllar’s first goal in the 8th minute was scored due to creating space inside the box. The second goal, in the 20th minute, was another tack inside the box. Finally, a minute later, the third goal saw Cuéllar completely out-run two defenders and then go one-on-one with San Luis goalkeeper Stefani Jiménez.

Tijuana also had goals in the first half by Rosa Aguiar and Nancy Zaragoza. However, the Tijuana defense wasn’t perfect and the victory wasn’t a blow out by any means. San Luis scored the opening goal in the 7th minute from Kimberly Reséndiz off a strike at the top of the box. Paola Alemán and Edith Carmona also tacked on goals against Tijuana keeper Itzel González.

The win is Tijuana’s first of the Clausura.

Brianda Escobedo was the Necaxa player that sent shockwaves through the Pumas bench on Friday’s lone match. Necaxa, who has lost all three Clausura matches heading into Week 4, found the opening goal against powerhouse Pumas. Off a long free kick, Escobedo found a pocket of space in front of goal and picked up the pass from teammate Samantha Calvillo.

However, Pumas didn’t falter. Immediately at the beginning of the second half, they struck back. Edna Santamaria, almost exactly at the penalty spot, slotted her shot past Necaxa goalkeeper Daniela Muñoz.

This was the second match for Necaxa under interim manager Leonardo Alvarez.

Due to her fast start to the Clausura in scoring goals, Alison González was recently called into the Mexican women’s national team camp. However, her teammate Ana García might be eyeing a call up by new manager Mónica Vergara in the near future. Week 4 was the first week in the second-half of the season where González didn’t score.

But García found two goals, lifting Atlas to a victory over Club León. Atlas is now the only undefeated club in Liga MX Femenil with four-straight victories. García’s first goal in the 27th minute was inside the penalty area, as the ball skipped past a Leon defender and right at García. She took a few dribbles closer to goal and then tapped it past León goalkeeper Maricruz Gonzalez. García opened the scoring in the second half by positioning herself at the far post for a cross and tap-in.

Atlas goalkeeper Ana Paz didn’t have a perfect game, though. In the 80th minute, León midfielder Joselyn De La Rosa got a friendly bounce at the top of the penalty area and sent her volley past Paz.

Atlas will look to extend their winning streak in Week 5 against Pachuca.

Janae González was the hero for Mazatlán on the road on Saturday. In the 34th minute, González was neglected by her Juárez defender and left wide open outside of the goal area. After a missed header from her teammate, González gratefully accepted the friendly bounce and volleyed her shot past Alondra Ubaldo.

Juárez has yet to win a contest in the Clausura, while the Mazatlán victory is the first since Week 1.

After a stunning loss to Pumas last week, Monterrey bounced back to the win column with a shut out against Querétaro. It wasn’t like the 5-0 victories that Rayados put up in its first two weeks of Clausura competition, but a win is a win.

Daniela Solís provided both goals, one in the first half and the other in the second half. Solís pickpocketed her defender and fired off a shot inside the penalty area against Querétaro goalkeeper Diana García. Her second half goal came in stoppage time, in the 92nd minute. Solís leaped up and smashed her header into net.

Puebla started off strong, but it was Cruz Azul who finished better in Sunday’s draw. Mariana Ramos got the home side on the board first, in the 16th minute, with an interception from the Cruz Azul backline. A miscommunication with goalkeeper Karla Morales gave ample room — and time — for Ramos to pick up the ball and slot it into an empty net.

Alejandra Curiel righted the wrong in the 70th minute, scoring the only penalty kick of the weekend. Puebla goalkeeper Brissa Rangel dove the correct way, but the ball was just a bit too far out of reach.

Puebla earned their first point of the season, keeping them out of last place.

The winning streak is over for Toluca, but an unbeaten streak remains. Club América, on the other hand, has continued its struggle of picking up victories. In the first four Clausura matches, Club América was only able to compile one win. This is the second-straight draw for the club.

However, Club América did strike first. María Piña only needed two minutes to get past the Toluca defense and goalkeeper Sandra Lozano. Piña was physical and fast, outrunning and almost stiff-arming her defender to get the shot off. Then, Arlett Tovar continued her goal-scoring prowess, equalizing the match in the 16th minute on a stunning free kick strike.

Right before halftime, Daniela Flores retook the lead for Club América with a diving header past Lozano. Scoring the lone goal of the second half, María Mauleon equalized once again for Toluca off a corner kick. Mauleon took one-touch on a volley and sent her shot past Jaidy Gutiérrez.

Toluca dropped down to third place due to the draw, but remains in contention for an exciting first place finish.

The mighty can indeed fall. Powerhouse Mexican club Chivas de Guadalajara were stunned when Mónica Ocampo scored the dagger in the 88th minute on Monday for Pachuca.

On a free kick, Ocampo’s shot found a narrow space between goalkeeper Celeste Espino and the post. It was a well taken kick, and a good guess from goalkeeper Espino to dive the right way. However, the ball went right underneath the goalkeeper’s hands and into the net for a relieved Pachuca team.

Chivas has now bumped down to sixth place following the loss. The club’s three-game winning streak is over.

Katty Martínez was invited to the Mexican national team camp after being a scoring machine for Tigres. She didn’t let up, or disappoint, on Monday night either. On the road against Santos Laguna, Martínez scored once again, in the 44th minute, to give Tigres some confidence heading into the locker rooms. Her goal was assisted by former Chicago Red Stars midfielder María Sánchez, who placed the ball perfectly.

Tigres got some help from Santos in the second half, with a 64th minute own goal by Cinthya Peraza. Off a free kick, Peraza headed the ball, but it spun backwards and snuck into the Santos goal. Longtime Mexican captain Stephany Mayor put the nail in the coffin, scoring in the 85th minute and taking on three Santos defenders and goalkeeper Wendy Toledo.

Santos is currently on a two-game losing streak.

WoSo Around the World: Levante making noise in Spain
Ebony Salmon is a bright spot amid Bristol City’s relegation fight