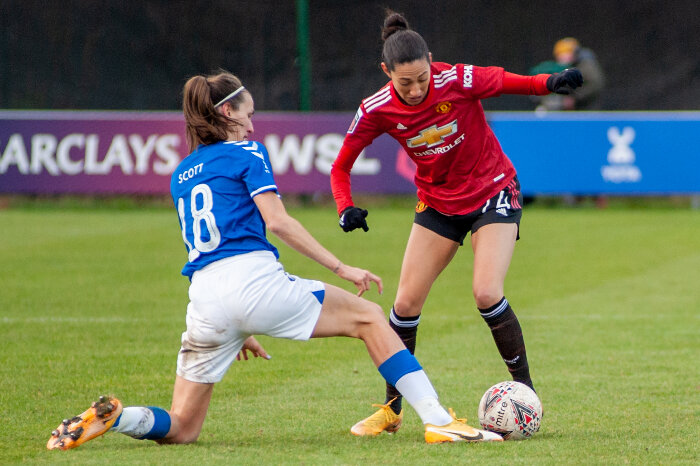 The top three of Chelsea, Manchester United and Manchester City all earned maximum points this week in the FA Women’s Super League, while fourth place Arsenal was without a match for the second week in a row due to postponements. Read on for all of the league’s news, including goals by two U.S. national team players, and a debut from another.

📊 How the #BarclaysFAWSL table looks after this weekend's fixtures 👇 pic.twitter.com/IN0KvopWjg

First half goals by Ella Toone and Christen Press sealed the win for United on Sunday over Everton, keeping them level on points with Chelsea at the top of the table (though Chelsea still has a game in hand).

Press started the game and played 80 minutes. Her goal (her second in the league) was an impressive feat, considering she fought off defender Danielle Turner through the 18 on her way to goal:

Christen Press fights off Everton’s defenders to make it 2-0 for United! 💥 pic.twitter.com/pR8nOysRVc

Everton’s two new loan signings both played in the match — England international Jill Scott (on loan from City) and Swiss international Alisha Lehmann (on loan from West Ham). Sunday was a bit of a homecoming for Scott, as she started her WSL career at Everton, and the match was a milestone as well, as it marked her 150th league appearance. Everton enjoyed more of the possession in the second half, but couldn’t put away any of their chances, though they came close through a strike from distance by Scott that forced a diving save by United keeper Mary Earps.

As reported by Emma Sanders, Manchester United coach Casey Stoney shared on Friday that Tobin Heath’s ankle injury will keep her out of action for 10-12 weeks, putting the timeline for her return in mid-April.

Stoney on Heath expecting to be out for 10-12 weeks: "A big loss for us. She’s injured her ankle. Obviously disappointing for her. She’s still heavily influential in our environment. We will work hard to get her back as safe and as quickly as possible.” #MUFC

Lavelle scored just minutes after coming into the match in the 65th minute, a hard strike that sailed over West Ham keeper Mackenzie Arnold’s head. It was her first for City in the WSL.

Sam Mewis was not available for the match, as she picked up an ankle injury in the US Women’s National Team’s second friendly against Colombia in January.

Abby Dahlkemper made her first start for City and played the full 90 minutes, in a relatively quiet evening at centre back. The Equalizer’s Jeff Kassouf spoke to Dahlkemper about her search for a new challenge with the Citizens:

‘Surrounded with newness,’ 2021 is a year of change for Abby Dahlkemper

Chelsea brought Spurs’ seven-game unbeaten streak to an end on Sunday with a 4-0 win at home, courtesy of a brace from Melanie Leupolz, and goals by Pernille Harder and Sam Kerr.

Leupolz’s first goal was particularly a sight to behold, a long distance strike from outside the box:

She shoots when she wants 🤯

A long range goal from Melanie Leupolz loops in to the goal against the run of play! #BarlcaysFAWSL pic.twitter.com/48nvAmwebh

On Saturday, Bristol City earned a 3-0 win over Brighton, collecting an important three points. They still sit in last place with five points, but closed the gap on Aston Villa and West Ham, who both have seven points (and a game in hand each).

Yana Daniels got Bristol on the board with this rocket, just three minutes after the opening whistle:

Ebony Salmon added a goal in each half to seal the win for the Robins. A red card for Kayleigh Green in the 68th minute didn’t help Brighton’s cause, who are now without a win since Nov. 15.

And it wasn’t just any old midweek tie, as with the win, Chelsea extended their unbeaten streak in the league to 32 games, breaking the WSL record previously held by Manchester City. This streak was extended to 33 games with their win on Sunday.

Canadian fans will be interested to note that Jessie Fleming made her first start for Chelsea in the match, and played the full 90 minutes.

Postponed due to a waterlogged pitch.

Arsenal have a tough schedule in the coming weeks, as they play Manchester City at home on Feb. 7, and head to Kingsmeadow to play Chelsea away on Feb. 10.