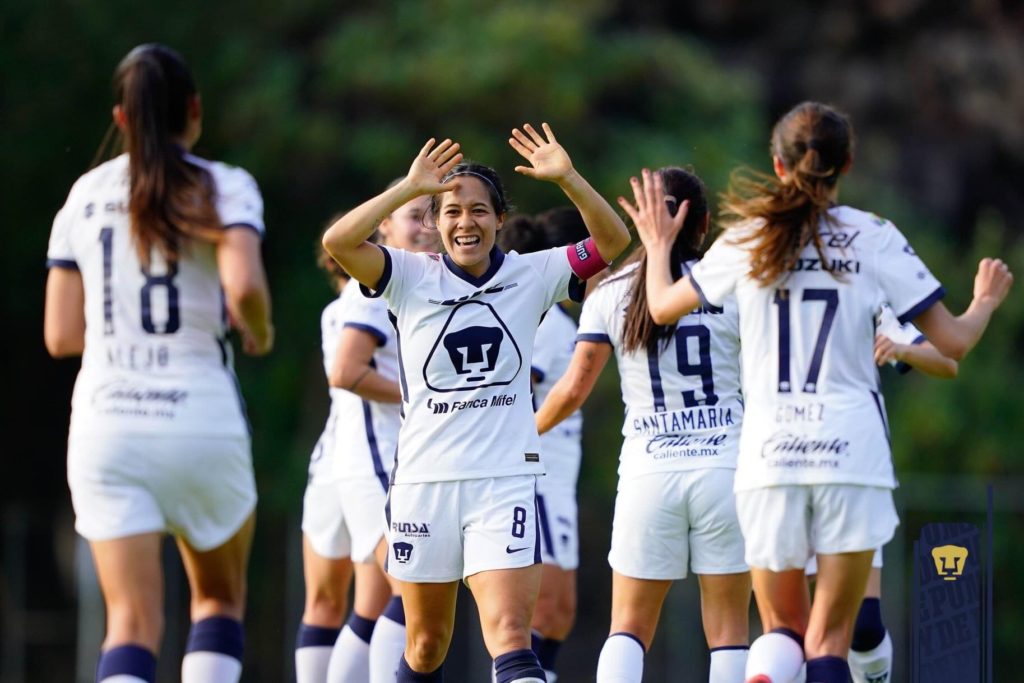 Liga MX Femenil competition is heating up. Week 3 of the Clausura is officially over and the results have left fans in Mexico scratching their head. The mighty Monterrey fell, América had a stunning draw and Atlas continued their winning streak.

We recap all the action in Mexico from the third week of Clausura competition.

How the might have fallen. After recording wins for the last two weeks — with 5-0 final scores each time — Monterrey lost this weekend to Pumas on the road. Pumas had three different goal-scorers, beginning with Edna Santamaria’s header off a corner kick late in the first half. Santamaria headed the ball almost exactly at the penalty kick spot past Rayadas goalkeeper Alexandria Godínez.

Laura Herrera scored the first of two second-half goals, creating space inside the box and then firing with her right foot. Finally, Marlyn Campa pulled back away from her defender inside the box, in the 89th minute, and tapped the ball in net. Mariela Jiménez, who entered the match in the 82nd minute, assisted the goal.

With the victory, Pumas jumps ahead to first place, while Monterrey takes a tumble down to seventh.

Cruz Azul might have won their match against Atlético San Luis, but they dropped the chance to have a clean sheet. Alejandra Curiel put her name on the scoresheet twice for Cruz Azul, scoring in the 18th and 67th minute. Her first goal was off a free kick, as she headed the ball in the far corner of the net. Her second-half goal was on a penalty kick, narrowly getting it past goalkeeper Stefani Jiménez.

Karime Abud scored late in the first half for Cruz Azul inside the box. Her shot grazed the fingertips of Jiménez, put went into goal. Abud’s goal was assisted by Curiel, who took an excellent first touch in the box.

San Luis midfielder Paola Alemán did ruin the party for the Cruz Azul defense and goalkeeper Karla Morales, scoring to take away the clean sheet opportunity. Alemán scored on a free kick, floating the ball into the upper corner of the net. Cruz Azul put up a four-person wall, but Alemán’s shot went over and wide of the wall.

The first half provided all of the goal-scoring action between Juárez and Pachuca on Saturday. Lizbeth Ángeles wasted no time in getting the visitors Pachuca on the board, scoring in the 8th minute. Ángeles cut through two Juárez defenders, staying onside, and went one-on-one with goalkeeper Alondra Ubaldo.

However, Ubaldo tripped and forced Ángeles to pull back and shift the ball around the box. This gave her defenders time to get on the goal line. But, Ángeles’ shot skipped through three defenders and into the Juárez net.

All hope wasn’t lost for the Juárez, though. Gabriela Álvarez found the equalizing goal in the 28th minute, scoring on a direct free kick. With an offensive wall that included three of her teammates and a defensive wall with five Pachuca players, Álvarez managed to strike high. The ball hit off Pachuca goalkeeper Esthefanny Barreras and took an unlucky spin into the net.

An early strike and a late strike defined Sunday’s lone Liga MX Femenil match, between Mazatlán and Club América. The home side, Mazatlán, struck first courtesy of Melisa Ramos in the 1st minute. Ramos, out wide on the right side of the pitch, picked up a pass and dribbled toward goal, getting her shot off inside the penalty area. Club América defender Melissa Arredondo attempted a slide tackle to stop the ball, but couldn’t deflect the shot.

Just when it seemed like Mazatlán would take away three points, Daniela Espinosa provided the upset. Off a corner kick, the ball bounced off one of her teammates and to the feet of Espinosa, who used a high kick — and one-touch — to get the ball past goalkeeper Mariana Zárraga.

The reign of Toluca has continued into Week 3 of the Clausura. Toluca has been the surprise team of the second-half of the Liga MX season. Toluca is currently riding a three-game winning streak after defeating Querétaro at home. And, with a third straight victory, Toluca found themselves finishing the week in third place.

There are four undefeated teams left in Liga MX Femenil right now, with Pumas, Chivas de Guadalajara and Atlas rounding out the group.

Zaira Miranda scored the lone goal for Toluca in the 79th minute. Miranda snuck behind one defender and in front of another, and slotted her shot past goalkeeper Dayri Hernández. The ball was perfectly placed to Miranda from teammate Maria Sanchez. Querétaro had chances throughout the match, totaling four shots on goal, which kept Toluca goalkeeper Sandra Lozano busy.

In Santos Laguna’s first match after the sudden passing of manager Martin Perez Padron due to COVID-19, Santos Laguna suited up and went on the road to face Chivas de Guadalajara. Santos dropped the three points, in the first match with Jorge Campos — who led the team last week against Pachuca — taking over  the interim role.

Joseline Montoya scored Chivas’ first goal inside the penalty area, taking on three Santos defenders. Montoya began the play, passing to her left and finding Alicia Cervantes, who passed the ball right back for Montoya to get her shot off. In the second half, Anette Vázquez scored by cutting through a crowded  box and shooting with her left foot.

Chivas, due to goal differential, sits in second place now.

Katty Martínez continued her dominance in front of goal this weekend against Puebla, helping her earn a Mexican national team call up. Just a minute into the match, Martínez set the tone for Tigres, scoring on a one-touch volley inside the penalty area.

Tigres didn’t keep the lead for long, though. In the 15th minute, Puebla attacking midfielder Dayana Cázares scored on a free kick picking up the rebound after goalkeeper Ophelia Solis elected to punch the ball away. Cázares’ shot took a friendly deflection and went into the Tigres goal.

However, Tigres took home three points courtesy of Blanca Solís in the 87th minute. Another corner kick for Tigres provided the late winner, as the kick originally hit off another Tigres player and took a bounce to Solís, who tapped it past Brissa Rangel. The win helped Tigres move up to sixth place.

Last week, Necaxa fired manager Fabiola Vargas. This week, under interim head coach Leonardo Alvarez, Necaxa found a goal, but couldn’t produce a win over Club León. All of the action happened in the second half, with Sanjuana Muñoz scoring the opening goal in the 63rd minute. Muñoz found a pocket of space inside the box and slotted the ball past Necaxa goalkeeper Daniela Muñoz with her foot.

It didn’t take long for Necaxa to fire back, though. In the 64th minute, on a free kick, Stephanie Baz scored off a header. The free kick was from some distance though, about 30-35 yards out. A friendly bounce for Baz offered some assistance.

Instead of splitting the points, León defensive midfielder Sonia Vázquez made sure her side went home with all three points. On another long free kick — this time, the kick was taken on the line of the circle at the middle of the pitch — Vázquez took on goalkeeper Muñoz and won the header, sending it into goal.

With the loss, Necaxa kept their same spot from last week: last place.

Alison González can’t stop scoring, adding another to her tally in the third week of the Clausura. She has at least one goal in all three Clausura matches. This time, the 18-year-old scored on Tijuana and goalkeeper Itzel Gonzalez. The tale of the tape for Tijuana has been letting in goals late in matches. That happened once again, as González scored in the 89th minute.

Her goal came on a free kick, about 25 yards away from goal and outside of the box. Originally, the Tijuana goalkeeper grabbed onto the ball, but lost it after colliding with her teammate Nathaly Martinez and falling down. González took advantage of the blunder, poking it into the empty net.

Atlas sits in fourth place, due to goal differential. However, the reward has been immense for González, who was called up to the Mexican senior national team.

The news of Mónica Vergara’s hiring as the first female manager of the Mexican women’s national team came just a few short days ago. However, the El Tri Femenil coach was quick to make her first selections for the upcoming Mexican camp.

Notably left off the roster were forward Renae Cuéllar from Tijuana, goalkeeper Cecilia Santiago from PSV in the Netherlands and Jimena López, who recently just signed with Eibar in Spain after being drafted by OL Reign of the NWSL.

#Women | These are the ladies that have been called up to the Senior team for the first time!!!🇲🇽💁🏽‍♀️

Currently, there are no friendlies scheduled for Mexico.

WoSo Around the World: Man United provisionally on top in England
Why and how Leah Galton is one of the FAWSL’s best wingers right now